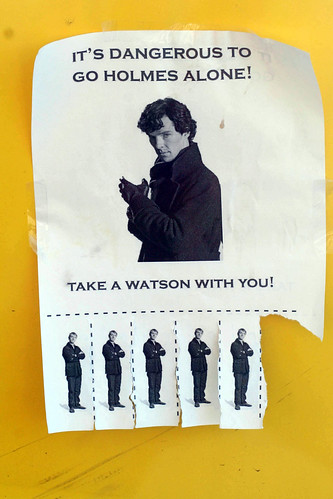 Last weekend, I accomplished a thing!

I brought my usually out-of-date Flickr page up to date! All those photos that have been sitting on my hard drive over the last month? Edited and uploaded. This means I could feasibly blog about stuff that happened as recently as three days ago instead of digging back to three months ago (I'm going to finish those Berlin posts, though, I swear, SWEAAAARRRR [impassioned yell turns into high-frequency shrill; neighborhood dogs turn their heads in confusion]). How'd I overcome my usual photo editing malaise? It went a little something like this:

So all I need is a really compelling TV show to keep me glued to my computer, and I'll push the boundaries of healthy computer use and sleep deprivation ever further.

Aaaand on to the food portion of this post.

[stares at monitor; clasps hands; narrows eyes to slits] (This is how I give the illusion of deep thought, even though my thoughts are more along the lines of this.) 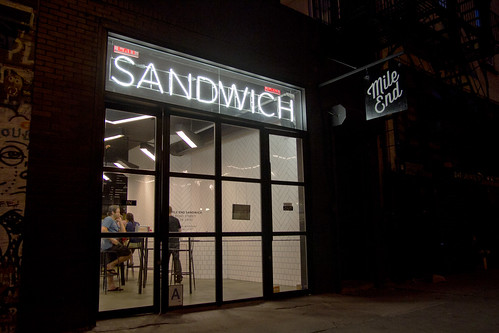 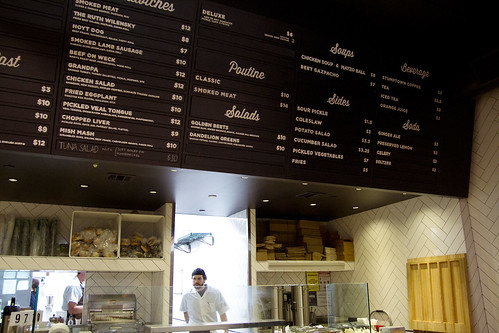 Last week is significant for being "The Week I Ate More Chopped Liver Sandwiches Than I Usually Do In, Like...[Counts on Fingers]...Ever." And by that I mean I ate two chopped liver sandwiches. But that sounds less impressive. 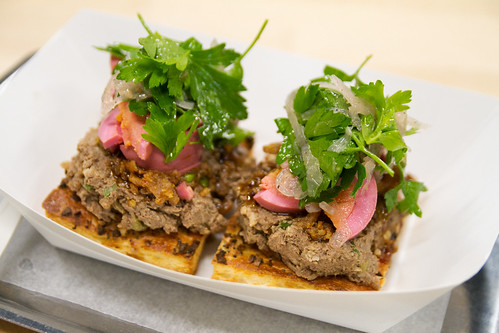 Chopped liver with a lot of stuff on top.

First up was Mile End Sandwich's chopped liver sandwich ($9) topped with a sprinkling of gribenes, thick slices of pickled hard boiled egg, thin shavings of pickled onion, duck jus, and parsley salad, all on top of very crisp squares of pletzel. This is obviously not your traditional chopped liver sandwich. It's also less sandwich, more like bloated crostini (you could also call them open face sandwiches, but the size and crisp/crunchy nature of the bread reminds me more of crostini). Not that there's anything wrong with that.

Overall, I'd call it "I would eat this again" tasty. Rich, thick liver mash* complemented by tangy onions and egg, lightened by parsley, enhanced by pops of fatty, crunchy fried chicken skin bits. The downside is it's unwieldy to eat—you can't fit everything into one bite, and if you don't want everything to tumble down, you have to concentrate a bit more on maneuvering your mouth than if you were eating a normal sandwich whose innards are securely tucked between two slices of bread. Thankfully the toasted pletzel square holds up to the hefty mound on top of it, or else you'd have to eat it with a fork. The bread is basically a flat, edible spoon.

* You may be wondering, "What does chopped liver taste like?" And I'd say...LOOK OVER THERE AHHHH CUTE PUPPY OR SOMETHING [points] [runs away while you're distracted] ...Are you gone yet? ...No, alright then. Well. Chopped liver tastes like if you took liver and chopped it up. Judging from traditional recipes, it's mixed with chopped hard boiled eggs and sautéed onions. As someone who didn't grow up eating liver, I find the flavor inoffensive, but I guess it could be off-putting compared to most other stuff that doesn't have a wee smidge of metallic funk. There's also a nice mild sweetness to chopped liver. For a much better description plus a recipe, check out this "Nasty Bits" post from Chichi. 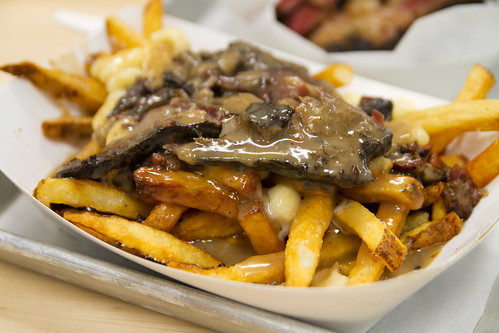 I felt pretty full after eating just half of the sandwich, but, ah, uh, that might have had something to do with me splitting an order of poutine with smoked meat ($14) with Eric. While certainly tasty, it soon proved to be too salty for me. ...And yet I continued to eat it because in the face of golden, crisp fries + gooey cheese curds + gravy + smoked brisket, my brain ignores potential sodium poisoning and expects more, more, more deep fried starch. The smoked brisket didn't do much for me, but the fries were perfectly good and exceptionally crisp (when not soaked in gravy-cheese); next time I'd go for plain ol' 'tatoes. As far as "fries topped with meat and cheese" choices go, my heart still belongs to Kenny & Zukes. 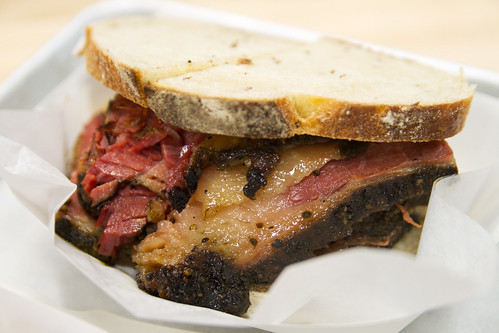 And if you want to see what a regular smoked brisket sandwich ($12) looks like, there ya go. 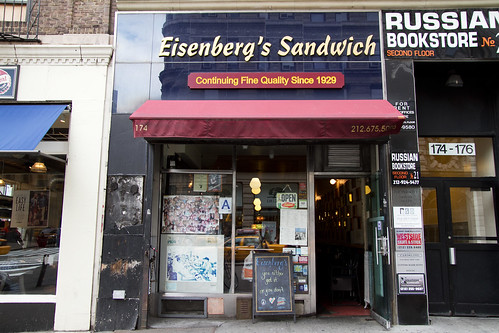 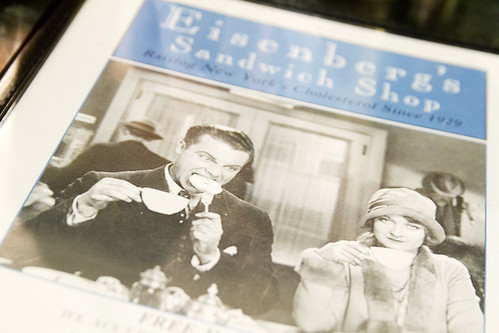 Four days after eating at Mile End Sandwich, I tried a nearly opposite strain of sandwicherie, Eisenberg's Sandwich Shop. Eisenberg's is one of those classic diner spots ("raising New York's cholesterol since 1929," as its menu proudly states) I'd been meaning to try for years, but never did...mostly because I forgot it existed. (Shake Shack's proximity in Madison Square Park may have had something to do with that.) 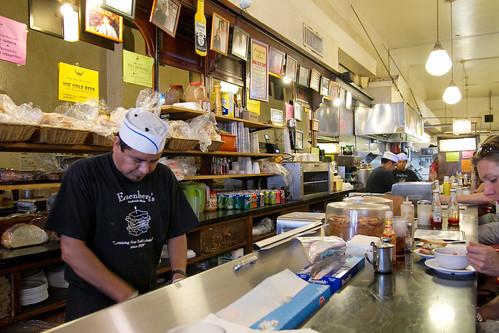 But now that I've been to Eisenberg's, I won't forget it. I'm a sucker for gracefully aging (heck, even not gracefully aging) old school lunch counters. More broadly, I'm just a sucker for nostalgic things in general, whether or not I actually experience the thing. I didn't grow up eating sandwiches at long counters while sitting on red vinyl swivel stools, but I wish I had. AND THUS I MUST NOW FILL THIS PAINFULLY GAPING HOLE IN MY LIFE. 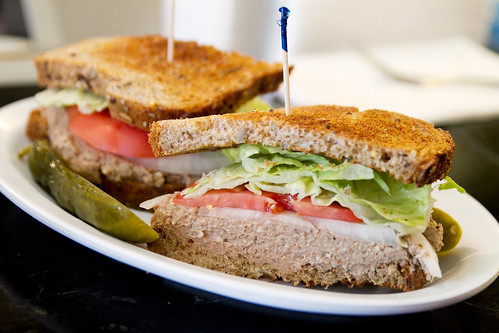 Melissa and I shared two sandwiches, starting with a chopped liver sandwich ($8) topped with raw onion, tomato, and iceberg lettuce on toasted whole wheat bread (bread choice is up to you; I wouldn't say whole wheat was the best for this). I haven't eaten enough chopped liver sandwiches in my life to know where this sandwich stands in the great chopped liver sandwich ratings board, but I'd guess somewhere in the middle. Not bad, not amazing. Compared to Mile End's chopped liver, Eisenberg's wasn't as rich and dense, more splodgey and light. We got all the fixin's because we figured why not, but while the crunch of the veggies was welcome, all three was too much and diluted the liver. Next time, just onion would do fine. 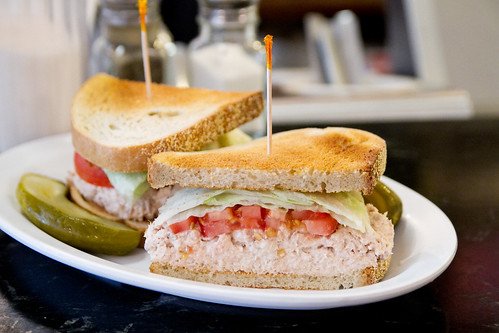 I was more fond of the tuna salad ($7.25), another no-frills sandwich made with a thick layer of basic, creamy tuna salad—canned tuna, mayo, seasonings, nothing else I could discern—topped with tomato and iceberg lettuce on crisp, well toasted rye. It's not mind-blowing, but tuna salad doesn't have to be. It's a well seasoned, neatly made sandwich. This is all I need when it comes to tuna salad. Craving successfully satisfied. 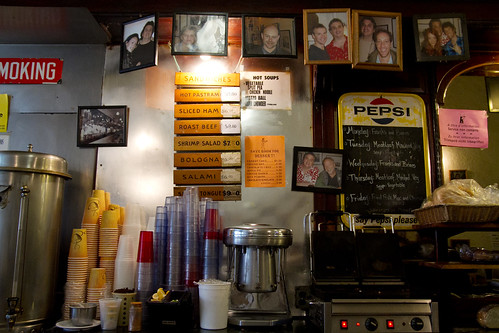 While, after one visit under my belt, I wouldn't say Eisenberg's is worth going out of your way for food-wise, I...wouldn't mind going out of my way for it. It's comfortable, reasonably priced, and it feels homey—world's away from the somewhat sterile black-and-white environment of Mile End Sandwich (not that there's anything wrong with that design, it's just not one that reels me in). I totally admit to being captivated by Eisenberg's worn diner charm and the friendly-and-just-chatty-enough cook who made our sandwiches within eyeshot.

Two very different chopped liver sandwiches, and two that I'd eat again, depending on how I feel. I liked Mile End's sandwich more, but I'd rather hang out at Eisenberg's.

Time for me to start a "chopped liver sandwiches to try" list.

Next time you're at Eisenberg's, try the borscht, the pastrami sandwich and the egg cream. This place is a classic out of Edward Hopper.

Katie: Thanks for the recs! Definite wanna try allll of that.

You have GOT to try the chopped liver (sandwich or appetizer) at 2nd Ave Deli - SO GOOD! No frills, just dense and rich and... yum! Absolutely my favorite - even better than my mom's (shh, don't tell). Enjoy!

sherloooooooockkkkkkkkkk!!!!!!!!! i heart it. chopped liver, not as much.

You got me watching Sherlock, and a I love it! Thank you.

i was soooo excited to see the first picture on your post :) i didn't learn about Sherlock until recently and i am totally addicted to the show...

Oops, didn't mean to ignore your comments for so long...I didn't get any comment notifications and I just thought no one read this post. [sniffle] ANYWAY, glad to see I was wrong about that. :)

LuckyDeb: Thanks for the rec! I'm ashamed to say I've never been to 2nd Ave Deli, although I recall walking by it when it used to be on 2nd Ave.

Janet: :D WISH WE COULD WATCH SHERLOCK TOGETHERRR! Even though I've watched almost every episode twice now. I could go for a third round.

Corinne: OMG YAY! So glad I could bring that into your life!

Stella: Woo, glad to hear it! I was very tempted to post this illustration instead of the photo up top, but I thought it may have been too cutesy (BUT AHH SO CUTE).

No way! I know the person who took that Sherlock poster photo! I thought the Flickr username looked familiar. Not that the photographer made the sign, but the sign is very cool. And so is Sherlock. =)