Happy May, guys! Oh hey, did I only write one post last month? I think that's a new record of non-productivity. Yeeeaah. [sticks head in a chum bucket] [Spongebob reference not intentional] As always, thanks for sticking around! Let's hope I can do better this month. Once I get my 600-and-something vacation photos from Berlin up, I'll feel more prepared to actually write about it. 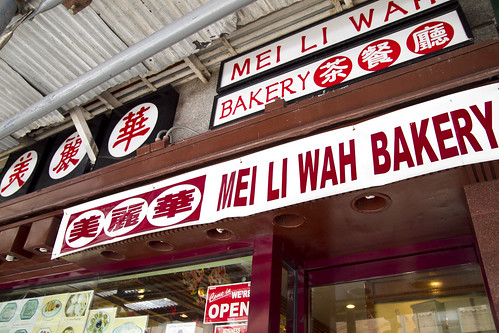 UPDATE (5/5/12): Just days after writing this post, I must dock Mei Li Wah a few points. :C Last night I went there around 8:30 p.m. only to find that they don't make rice noodles that late—thus no rice noodle roll-wrapped crullers for my friend and me. Make sure to go earlier for rice noodle action. We also tried their "Big Bun" stuffed with pork, chicken, mushroom, hard boiled egg, and sausage, but it tasted like one of the ingredients had died and infused everything else with the mild scent of decay.

In my mind, there's only one appropriate reaction to reading the words "Fried Salad (3 Pcs.)" on a menu:

"Holy shit what is a fried salad what what what oh my I AM DEFINITELY ORDERING THAT."

If you though the same thing, great! We are obviously very mature adults with progressive curiosities, like a modern-day Archimedes. Before I take you on a magical journey to reveal the mysteries of the salad, let us indulge in a celebratory fist bump. [bump]

As for the rest of you who didn't think the same thing...well. I guess you can come too. TAKE MY HAND I WASHED IT AND EVERYTHING, JUST FOR YOU...

All I knew about Mei Li Wah's fried salad before I ordered it was that it could be measured in pieces and each piece was worth $1.316. Otherwise, it was a mystery. A fried, oily mystery. I assumed it also involved fried vegetables. Or fried toppings. Or perhaps a variety of fried crust bits, tossed with dressing. 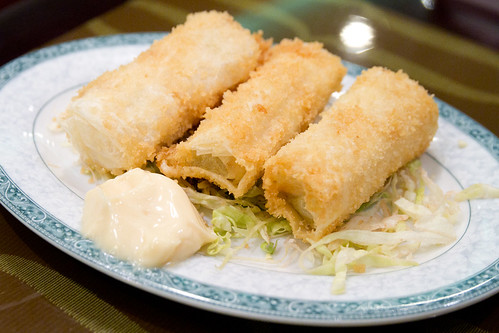 Or maybe it's a breaded and deep fried, thin-skinned, egg roll-esque log filled with burning hot mayo-based fruit and shrimp salad, atop a scattering of shredded lettuce, with a glob of dipping mayo on the side. Just like mom used to make in a parallel universe. 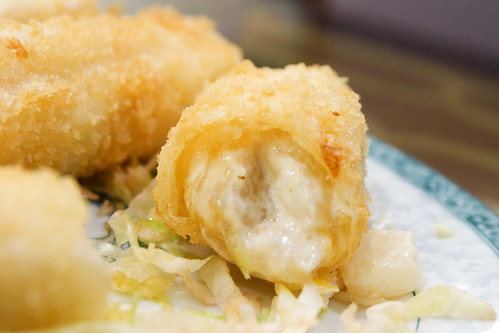 What? Yeah. Ok. It sounds awful—it's no surprise they went with a name more vague than "hot fruit and shrimp salad"—but it doesn't taste that bad. Unless you dislike mayo mixed with tiny fruit chunks and a dried shrimplet here and there, in which case, this is tailor made to fill you with disgust.

Although I can't say I'd order it again, I was fine with the fruit-mayo-shrimp-fried-crust combo. It's creamy and a bit sweet, and it's all encased in a light, crisp crust. It's like an egg roll-ified version of prawn fruit salad—prawns, melon, and mayo in some combination—if you're into that (I am). Nick liked it too, even more than I did.

Nick and I didn't stop at fried salad. Oh no; we wanted to get all the dishes with funny names. (Nick is a very good friend to have for this kind of task. He will eat anything. And everything. It's sometimes upsetting, but usually awesome.) 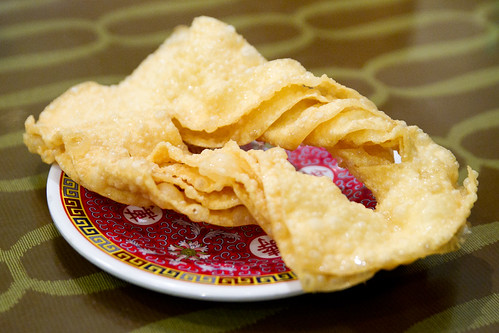 Crispy egg shatters ($0.90) lived up to most of its name. It was crispy. It shattered. And I gather there's egg in the wonton skin-esque dough. If you like aggressively crunchy snacks, this is worth your 90 cents. 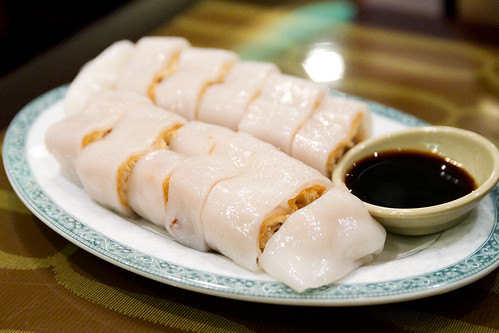 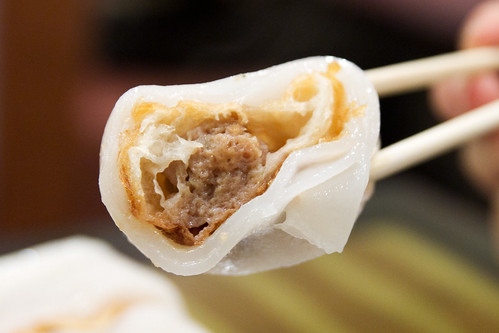 Stuffed beef pasta fried fritters ($3.50) ended up being rice noodle roll-wrapped youtiao stuffed with pulverized beef goo. (I'm guessing they meant "paste" when they said "pasta," considering there's another dish on the menu called "stuffed fish paste fried fritters.") Turns out stuffing a stick of fried dough with a meatlog and wrapping it in a soft-and-slightly-chewy noodly sheath (not the most delicate and supple noodle, but when combined with the other parts, that's ok) is a very good idea. I've had the meatless version loads of times at dim sum—it's one of my dim sum standbys—but I'd never before seen the deluxe version with a meaty core. Give me all the meat cores. 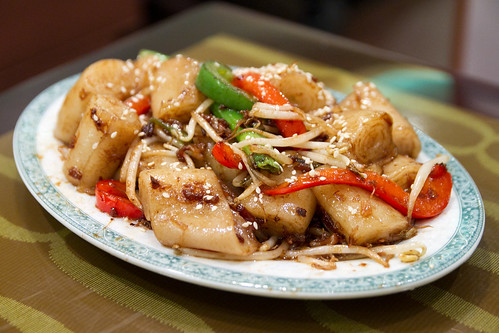 I should point out that most of Mei Li Wah's menu mostly consists of items that don't have funny names. Fried rice noodle roll with XO sauce ($4.95) was damn satisfying. Just lots of rolled up rice noodle chunks with thin strips of red and green pepper, mung bean sprouts, and sesame seeds, all coated in XO sauce. Chewy, a smidge crunchy, a bit spicy. 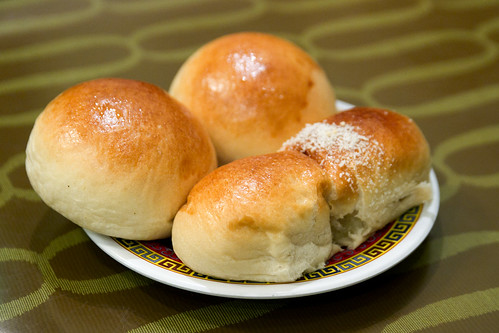 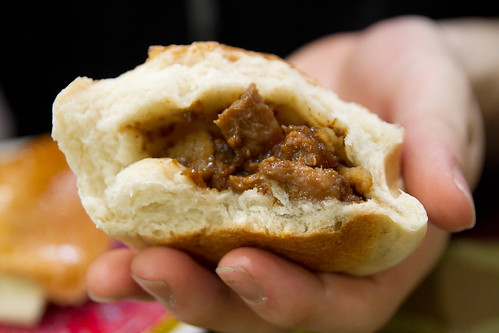 You can't go to Mei Li Wah without getting their famous roast pork buns ($0.90). I don't know if they're the best in Chinatown—I haven't eaten enough to judge—but they're among the better ones I've eaten, and considering their popularity you know they're always fresh. I once tried the steamed version, but that was a mistake; the meat-to-bread ratio was out of whack. Stick with baked for a high fatty pork chunks-to-bread ratio.

I've heard people praise Mei Li Wah for their pork buns, but I've never heard anyone say it's one of their favorite restaurants for non-bun matter. So I'll say it: Mei Li Wah is one of my favorite places to eat in Chinatown. ...This might be evidence that I haven't eaten at enough places in Chinatown. It's not just about the food, which doesn't necessarily fit under the "must try" category—and that's ok. I find the restaurant comforting as a whole: the sea foam green walls, the diner-style booths, the baffling ceiling stubs, the gruff, geriatric waitress who sounds like she gives half a shit about you. And I'm just a big softie when it comes to restaurants that offer fried salad.

After reading this, I HAD TO Google "'fried salad' state fairs." And I got 3,400 results. Is there anything people won't deep fry?

Fried salad definitely takes things to a new high... and I have to agree with you, their steamed roast pork bun is super whack compared to their lovely baked roast pork buns. you'd think the same dudes make 'em... why screw one up so badly while the other is good?

Awesome place. My dad used to take me there 40 years ago for great roast pork buns, oversized dim sum and attitude.

I can't say that fried salad sounds all that appealing... hahaha. But oh my gosh... the Stuff Beef Paste Fried Fritters & Fried Rice Noodle w. XO Sauce has my name written all over it :)

Marvo: Absolutely anything can be fried. It's the American dream! I need to go to a state fair before I die. Or maybe it would be the thing that kills me.

Danny: I went back last night and tried the steamed "big bun" with pork, chicken and egg. ...That wasn't good either. :( But not so much the fault of the bready bit as the filling, which was kinda off. NOOOO MEI LI WAH I gotta dock off some points.

tomishungry: 40 years ago! Must've looked pretty awesome back then. I wonder if their bun has changed much since then.

Stephanie: Yeah, those are the things I'd get again. But fried salad..ehhhhh...

The best pork buns are at Hop Sing (I think that's how you spell it) in Chinatown. It's near Citibank. The awning is red. You can see people buying boxes of the roast pork buns lol I know the oven baked ones are the most popular, but personally, I always liked the white steamed kind.

I don't know what kind of sauce they use, but it's not the typical red sauce (probably food coloring), it's a brown, savory sweet, sauce. Yum Yum. Hope you get to try it.

They also have something called Gei Mei Bao, which sounds kind of like a chicken bun, but it's not chicken at all. It's filled with the typical chinese coconut stuff.

They keep all their buns warm, so it's good!

Hope you get to try it. LOL at you guys trying the funny stuff on the menu =D

There used to be a place on division st that had the best za cherg (youtiao in rice noodle). They opened at 6am & it sold out by 10am. I think they closed down though. Now I have a craving for some. . .

I would try all of these things. All of them! And probably enjoy at least most of them!

This has nothing to do with food, but I don't have a Tumblr thing. I imagined you might enjoy this:

J: Thanks for the rec! I've only been to Hop Sing once; didn't try the buns. Next time! (I ended up trying a fried tofu..garlic...salted egg yolk thing. Whatever it was, it was good.)

Julie: I would try all these things with you!

(Nick is a very good friend to have for this kind of task. He will eat anything. And everything. It's sometimes upsetting, but usually awesome.)

WUHH??? Wait why don't you tell me when my eating is upsetting you?

Nicholas: I'm pretty sure I do tell you. Like if you ate 30 chicken nuggets in one sitting and I respond with, "That sounds kinda gross/bad for you." Methinks we've had a conversation like that before.

Robyn, nooooo. That's the first time (EVER, EVER, EVER) that I have to disagree with your culinary viewpoints. The pork buns at Mei Li Wah are just EHHH. The meat is good, and I love the chunks of fatty pork, but where's the CHASIU flavor??! That stuff is supposed to be sweet and sticky and red and chasiu gooey inside... unless their intent was to keep it pure pork flavor??! You gotta visit LA sometime. We have awesome pork buns!

Michael: Oh, I'm sure I have to visit LA for great Chinese food! Someday....before I die. :'[ There's a reason I didn't say these buns are my fave (I don't have a fave) or...well, I didn't say much about em in general, although I do like em more than other ones I've had. I've probably had a lot of mediocre buns in my life.

Ahh, my bad.. I've had many a mediocre bun in my life as well. Let's hope many more non-mediocre buns in the future... and by non-mediocre I really mean AWESOME. Cheers to awesome buns!