Cha-An is one of those unique but unassuming places you walk by and think, "Ah, that looks nice; maybe I'll eat there someday." And then five years later after passing it upwards of fifty (or maybe...a hundred) times, you finally eat there.

And by "you" I mean me. I've had Cha-An on my "to visit" list since my college years, but seeing it as more of a tea house than a restaurant (because...well, it is) held me back. My favorite kind of tea is mixed with a few generous glugs of milk and sweetened with a quarter cup of sugar—serious tea drinker, I'm not. (I once described the flavor of tea as "dirty water" to a friend. His response: PURE HORROR. Oopsss. Of course, it doesn't always tastes like dirty water, but come onnnn, sometimes it totally does.)

I wasn't driven to eat at Cha-An until Halloween when I was in desperate need of escaping my cave-like apartment and engaging in human interaction (and thus changing out of my pajamas) for the first time in over 24 hours. I remembered Diana mentioning being fond of their lunch special and it sounded like a good place to go if I were forced to eat by my lonesome. (I stopped eating out by myself a long time ago—it feels like a waste of silently consumed calories when I'd much rather spend those calories over conversation with a good friend.) Luckily, Kwan answered my tweet of neediness, setting me up for an exciting day of not-sitting-in-my-apartment-bedecked-in-manatee-themed-pajama-pants. As far as non-tea choices go, Cha-An's menu features a variety of small plates, two "Cha-An" meal sets, an afternoon tea set, and a daily lunch special. Kwan and I went for the lunch special, Unagi Hitsumabushi Don, which for just $10 comes with a side dish, pickles, and a pot of genmaicha. AND THEN IT WAS LOVE AT FIRST SIGHT. Unadon—grilled Japanese eel brushed with sweet sauce atop a bowl of rice—has been one of my favorite dishes since I could masticate. What's the hitsumabushi version? According to the Internet, it's a regional specialty of Nagoya (and more specifically the famous restaurant Hourai) that turns this dish into a sort of DIY-affair. You get a bowl of sliced unagi on rice along with dishes of shredded nori, wasabi, chopped scallions, and dashi or tea (I'm not sure which one it is, or maybe it's either), to be combined in a separate bowl into four different servings. Paul's Travel Pics describes it well with photos and words:

First serving: Eel and rice
Second serving: Add nori, wasabi, and scallions
Third serving: Add all of the above, plus dashi/tea
Fourth serving: Your favorite of the previous three Stick your face in it.

Cha-An's version doesn't require any mixing on your part—chunks of rich unagi and sweet soy sauce-based sauce are already mixed into the hefty mound of rice topped with shredded sweet omelet (tamagoyaki?), shiso leaf (one of my most favorite edible leaves for it sweet and fragrant loveliness), and a few more chunks of eel. Not quite like the dish its based on, but for $10 compared to Hourai's ¥2,730 Yen ($32.50), I think that's okay. The side of the day was a cold broccoli and pepper dish in sesame dressing. I may not love tea, but I do love rice and roasted things. Green tea + roasted brown rice = HAPPINESS-INDUCING CUP OF TEA. I ought to drink more genmaicha. For $3 more, we shared their dessert of the day: melon ball-sized green tea ice cream scoops and red bean paste in a delicate phyllo dough cup atop whipped creamy...stuff. Not their description, just my crappy one based on my photo. It's a nice way to end the meal on a sweet note, but isn't necessary. And the following week...

I ordered the same thing a week later though, when I returned to Cha-An with Diana and ordered the same unadon meal (although this time the side dish was seaweed-based). I thought the dessert might be different by that point, but nope. Should've double checked before I ordered it.

I don't usually revisit a restaurant a week after eating there, but most places aren't as pleasantly calm and cozy as Cha-An. (...Also, I love unagi.) It's a lovely little piece of Japan in the East Village, and I feel like quite the dumbbutt for waiting five years to eat there. The lunch special is just the right amount of food to not make you feel overstuffed or hungry. After leaving Cha-An, Kwan and I went to Momofuku Milk Bar to try their black sesame soft serve. The counterperson gave us an extra mini cup of black sesame soft serve when he realized he hadn't left enough space for it in our combination cup of black sesame/pumpkin cheesecake. It was a nice gesture, but unecessary after we took one lick of the black sesame and realized how very...not good it was. :( I know Milk Bar's soft serves are a mixed bag—sometimes their flavors are unique and good, and other times unique and confusing/unappealing/borderline revolting—but I figure they've had two years to get their soft serve craft down, and with black sesame being such a fantastic flavor it couldn't go wrong.

OH, BUT IT CAN GO WRONG. Dump in too much salt, and it's wrong. Maybe something was just off that day, but it's hard for me to believe that no one could've noticed an off-puttingly high level of salt unless that's what it was supposed to taste like. And I'm no salt wuss—I love the stuff. With our minds on the pumpkin cheesecake, which thankfully tasted fine, Kwan and I were in denial about the weirdness of the black sesame until we had eaten too much of it. I JUST REALLY WANTED IT TO BE GOOD, OK? And it's not just the flavor that was off. I love soft serve for its thick, creamy texture; the texture of this soft serve was...airy, not the sort that fills my head with rich mounds of dairy goodness. :(

My review is sort of pointless since neither the black sesame nor pumpkin cheesecake is on Milk Bar's current menu, but now you know my reason for not wanting to try more of their soft serve. If you think I should give them a second chance (or more like an eighth chance; I've tried a bunch of their flavors over the past few years), let me know! 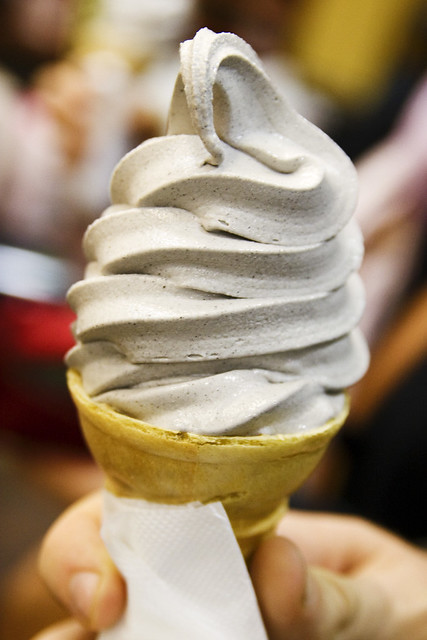 WHAT COULD'VE BEEN...if I had gone to New Jersey.

And if you want black sesame soft serve done right, head to the Ito-En counter at Mitsuwa in Edgewater, New Jersey.

I liked the cereal flavored soft serve... but that's about the only soft-serve I have good memories of.

Is should be "neither the black sesame nor pumpkin cheesecake IS on Milk Bar's current menu".

vegm: Thanks for the correction!

mitsuwaaaaa yesssssss soft serveee i want them in my house.

Funny, I was just talking to a friend about eating alone at restaurants. He absolutely will not eat alone in restaurants (he gets takeout and then eats alone while sulking in front of the computer). I don't mind eating alone, I bring a newspaper or book and sulk while I eat alone in the restaurant.

Salty black sesame ice cream sounds like it could be good, but from your description it sounds like epic fail. Sad face.

I had schnitzel and Kaiserschmarrn for Thanksgiving, teeheehee. See you when I get baaaack!!

Yes! I had also walked past Cha-An a million times and always thought I would try it one day. Over the summer, I was out in the city, and one of my friends suggested that a group of us meet there. We were all Cha-An virgins. We ordered a whole bunch of stuff, but what sticks out from this adventure is the scone - I'm not sure if they have it on the menu all the time. HOWEVER, I don't even generally like scones and have to say that this was one of the best sweet treats I have ever tasted in my life. It was so good that we got a few more orders for the table, even though we had to wait for them to bake - I guess they make them to order. Also, did you get to try the bathroom? They have some really fancy, button-controlled toilets. :)

out of all the restaurants in NYC, how coincidental that you and i BOTH wrote about Cha-An? http://tmaonawhim.blogspot.com/2010/11/i-just-wanted-to-seeoops.html

albeit yours is much much more recent. but still, it's quite "kismet"-y.

word, that black sesame was ridiculous. if they just tone down the salt it would be pretty good i think. but man... it was A LOT of salt.

Janet: WE SHOULD GO TO MITSUWA TOGETHER!!!

Angeline: The last time I ate alone at a restaurant it went by so quickly. Didn't have to wait very long for my food and then the lack of chatting meant I probably ate too fast...doh.

Jessica: SCHNITZEL THANKSGIVING! That sounds awesome. I've never had kaiserschmarrn before but I want to try it.

Laryssa: Whoa, I gotta try the scone! Next time! :D I did go to the bathroom...was too afraid to press the fancy buttons, heh.

Danny: Aw, we all had the same poopy experience. Why, Milk Bar, WHYYY?

I gotta admit - I think of myself as an "adventurous foodie" but black sesame ice cream sounds so not good to me, either. Glad you tried it out for your readers - so I can and will pass it up. *smile.*

Glorious pictures. Thanks much.

ME TOO. Hahahah. I'll finally go this month with the boy because you reminded me :x I loooooove tea (being Japanese, it's kind of a sin if I don't) so I have no excuse, honestly!

Denise: Black sesame ice cream is awesome! You should still try it. :) Momofuku Milk Bar's version was crappy, quite a feat since it's otherwise one of my fave ice cream flavors.

Erika: I hope you like it as much as I did!

As for the name, Hourai's website calls it "ひつまぶし" so I'm pretty "hitsumabushi" is it? ;_;

did you ever see that 'cooking with dog' video with the eel bowl? I had no idea until I saw it that eel+rice could be such a succession of various slightly different bowls of awesome.

Eating alone is pretty fun in Japan - there's almost always someone else also eating alone so you can talk if you want to, and if there's no one else then the staff will definitely want to chat.

And black sesame is a standard flavor here now for soft serve, along with vanilla and green tea.

It IS hitsumabushi. Sorry!

I read a misprinted menu in Japanese that said "ひまつぶし" (which means "killing time") and I thought it was what it was...but it is in fact "ひつまぶし/櫃まぶし"!! My mom told me. Lol. It's a Nagoya specialty, apparently...

I learned something new, lol.

elizabethranger: I hadn't seen that video before! Awesome! Dogs make everything awesome. :)

Jon: Thanks for the info! I didn't know about the differences. Wish black sesame were a standard flavor here. Hooohum.

Erika: No prob! Boo to that misprinted menu. :)

Mitsuwa's kurogoma softserve is THE BEST. And their red-bean filled fish-shaped taikyaki. After having some softserve in Kyoto (and by some I mean a lot), I have been searching for quality kurogoma and matcha softserve in the city. It's a shame Milk Bar didn't perform! Oh well, the search continues!