I visited Honolulu with Kathy from May 9-16. Yup, that was...a long time ago. I've just got two more Hawaii posts to go before getting back to New York City—I SWEAR IT WILL HAPPEN, unless I die in the next two weeks. Refresh your memory with Day 5, Part 1. 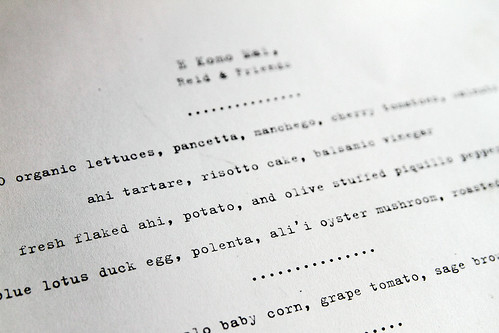 When Kathy and I told Reid of Honolulu-based blog Ono Kine Grindz that we were visiting Honolulu and wanted to break some bread with him—we've been reading each others blogs for years—we didn't expect him to organize a family-style 11-course dinner by executive chef Ed Kenney at Town followed by a six-course dessert by pastry chef Rachel Murai at Nobu in Waikiki.

But we should've, because Reid is a serious eater of the sort that I doubt I will ever be. These chefs put together special menus for Reid and his band of happy food blogger friends, which included Alan of ma'ona in addition to Kathy and me. It was Reid's first time meeting all of us, and with the help of Ed and Rachel he left his mark by making us all feel mega pregnant and happily food coma-ed by the end of the night. We started with small plates of almonds, cantaloupe slices, and pancetta. There was also some bubbly. I gave my flute to Kathy since I'm nowhere near being able to appreciate alcohol. 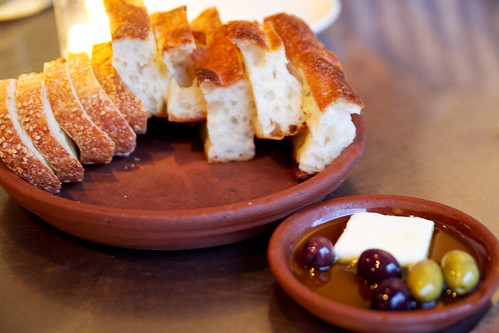 Also to start was sliced focaccia and baguette accompanied by a dish of olive oil topped with a pat of butter and red and green olives. Mm, two fats of different origins. We got more small bites in the form of risotto cakes topped with ahi tartare and balsamic vinegar. 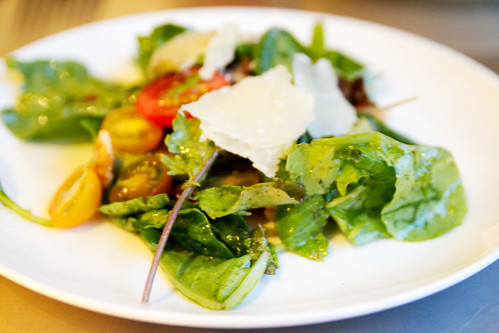 And a salad made with organic lettuces from MA'O, pancetta, Manchego shavings, halved cherry tomatoes, and walnuts. Our last starter was a sunny-side up blue lotus duck egg on top of polenta and ali'i oyster mushroom with roasted tomato.

And now...for the main dishes. 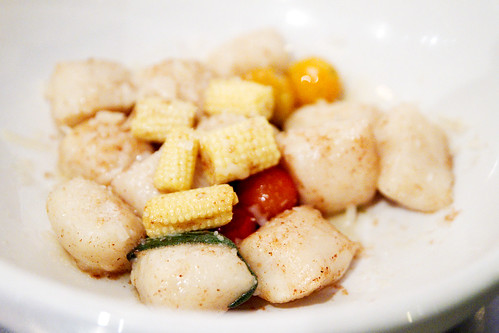 Gnocchi with hamanalo baby corn, grape tomatoes, and sage brown butter. SAGE. BROWN BUTTER. I WANT IT ON EVERYTHING. STARE INTO THE FISH.

Seared ahi, Milton's potatoes, and long beans in scallion vinaigrette. That is so many things I like in one bowl. If I put my mind to it, I could probably make something like this at home. GET TO IT, MIND. STARE INTO THE BEEF. This was once a rabbit. Now it is..deliciousness.

Nor this very special spread of rabbit cooked a gazillion ways. Or six ways. But six is a lot compared to most rabbit dishes, which I'd assume only feature one method of preparation. Here we had little meat cakes, something rolled up, something grilled, and more things that I've unfortunately forgotten, but maybe you can figure out from looking at the photo. Ed really got the most out of that rabbit in its final state of (dismembered) existence. As for where the rabbit came from, I think the story is that there's a local woman who breeds show rabbits, but if the rabbit doesn't cut it on the showroom floor, it miiiight meet its fate as a gourmet meal. Doodeedoo. (RABBIT LOVERS, BEWARE, but those interested in butchery, proceed: Alan pointed out these photos taken by chef Mark Noguchi of chef de cuisine Dave Caldiero breaking down the rabbit.) You can't have all this meat without side dishes! For contorni we got a honkin' huge bowl of braised gigante beans. Along with grilled lettuce and shaved Parmigiano. Methinks Ed wanted to feed us more desserts, but since we had a dessert meal in our future and Ed had more than adequately stuffed us with savory goodness, he ended our meal on a light, refreshing note with grapefruit Campari sorbet.

Many thanks to Ed for feeding us an outstanding meal of champions that will go down in my eating history as "THAT CRAZY, SEEMINGLY NEVERENDING DINNER WHERE I ATE A RABBIT SIX WAYS," and to Reid for treating us to Ed's culinary prowess. (I've read reviews saying that Town is pricey for dinner, but is reasonable for lunch.)

And next up...six-course dessert tasting menu at Nobu by Rachel Murai! I'm ashamed to say that my nose was so stuffed by this point (my allergies really acted up in Honolulu, argh) that I had trouble tasting most of the dishes. :( Judging from everyone else's reactions, they were as delicious as they were beautiful. I tried my best to taste them by repeatedly blowing my nose before/after taking a bite. Which worked. Sort of. I'm sure my nose blowing was quite unsightly, but there were thankfully few people in the restaurant to witness my mucus unblockage by the time we started eating around 10:30 p.m. 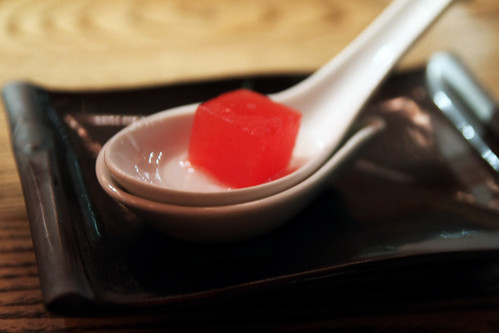 Sous vide watermelon and umeshu, topped with lime granite. I can't see the granite in the photo, but you can see it in Kathy's post. Maybe it melted by the time I took the photo. D'oh. Azuki panna cotta, matcha sorbet, tapioca pearls, and a kuri (chestnut) tuile. I was really into the tuile. Need more chestnut-flavored stuff in my life, perhaps. 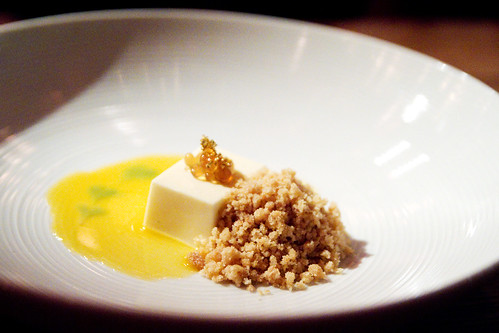 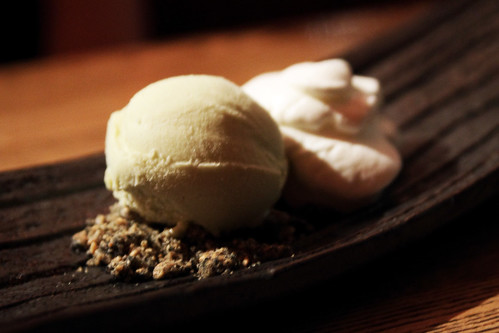 Pistachio ice cream, coconut foam, and caramelized goma (sesame seeds). I got a few whiffs of the black sesame. Those were some good whiffs. 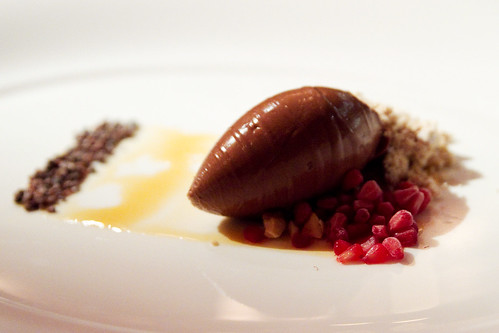 Espresso snow, sweet milk, cardamom ice cream, and financier crisps. Ah yes, there had to be a shave ice dessert! Although I'm not a fan of espresso, I'm totally down with it when mixed with milk and ice cream.

It seems crazy to have added all those desserts to our already-full bellies, but...it worked out just fine. Because desserts goes in a separate stomach that may not physically exist, but psychologically, it totally does—if the desserts are tasty enough, which in this case, they were. It'll be a long time before I get to feast on such elegantly composed desserts again.

On an unrelated note, a baseball capped George Clooney and friends were sitting a few tables down from us the whole night. I don't think I would've noticed if Alan hadn't pointed it out—I can count the number of celebs I've seen in New York City in my 5+ years of living here on one hand—but once he did, it was hard to ignore. (I have one random George Clooney-related memory that I'll mention now since I doubt I'll ever have any reason to again: During one recess period in fourth grade [1994], one of my friends said something like, "I love ER—George Clooney is so hot." I probably nodded and smiled, but thought, "I'm nine-years-old; I don't really watch ER and I don't think anyone is hot.")

I can't thank Reid enough for organizing our gluttonous night and for all the chefs involved for making it happen. Reid and Alan are great eating buddies for their wealth of food knowledge...and bottomless stomachs. I'm still working on the former, but I seem to be doing fine on the latter.

Rabbits are so multi-faceted... they can be cute and fluffy, or delicious as sin :D

Everything looks sooo yummy! If I ever open up a restaurant, I'm definitely going to put a fried egg in there somewhere.

Those rabbit preparations look fantastic! I assume much pork fat was used to get them so...glisteny! The ahi bites look wonderful too.

What a delightful experience and a long-list of delicious food. The different abbit preparations intrigue me a bit... for some reason.

Of course rabbits have the most tender meat. They're so cute

Lick My Spoon: I wish I had paid more attention to the different preparations. But at the time I was just like, "JAYSUS THAT IS SO MUCH FOOD" and blanked out on whatever was being said to me. oops.

Eileen: Gah, I do like cute things. If I had to kill a bunny by myself I don't know if I could do it. Unless it were ugly. I hope there aren't many ugly bunnies out there.

What a fantabulous meal. And your photos are wonderful! I am now determined to go to Hawaii. So glad you were received in style!

I've eaten at Town twice and enjoyed it very much both times. God, I love those fries.

Bonnie: Yeah, definitely visit Hawaii if you can!

Marvo: I definitely ate more fries than steak. Mmm fries, one of the best foods everrr.

It must be the heat, but the creme de mascarpone, honey caviar, almond extra virgin olive oil crumble, passion fruit coulis, and shiso syrup is sooo stuck in my head. The photo is etched in my brain. I am trying to wrap my mind around how that tastes! I hope they still serve it when I go later this year.

Experiencing this meal vicariously through your photos is almost enough for me. Those gorgeous desserts are going to haunt my dreams for months. LUCKY DUCK!
-S

my goodness, i pop in here for the first time in a while, and your photos are even more GORGEOUS.

I stumbled upon this blog via an ad for BlogHer on CakeWrecks. Although nothing beats the Pineapple Pancakes I got at Eggs N' Things, I should really use your blog as a reference the next time I visit Honolulu. DROOL (for just about everything you got in Hawaii... looking forward to the next Hawaii posts!)

Carrie: Woohoo, yay Cakewrecks! Glad you found your way here. I passed Eggs N Things and heard good things about it...I'll have to try it next time I'm in Honolulu!

still staring at the BEEF. stupendous shots. the meals looks ridiculous as well. I dunno where you put all that grub.

Anthony: Glad you like the photos; your photography's awesome! I don't where i put the grub either. Methinks my metabolism must still be working alright.

i'm so jealous!!! I want to eat those desserts O_O!!! Especially the olive oil crumble!