"You just had a bowl of SATAN'S DIARRHEAAAA!"

So that's Greg, just being himself, invoking his most demonic voice (much like that of an angry wrestler) to inform me that our dish looked like the result of Satan dropping a deuce while blighted with unbalanced intestinal flora. His description wasn't far off. The real name for Satan's Diarrhea is Dan Ho Bac Mul Jjim, sautéed seafood (squid, shrimp, clams, and maybe more) mixed with steamed sweet squash and slices of dduk, topped with a ring of mozzarella, sprinkled with chopped scallions, and smothered in a spicy gochujang-based sauce. Pray tell, where does such a delectable mélange of red chili-flavored sea life, cheese, and gourd come from? Korean restaurants that cater to a mostly inebriated crowd, in this case, Song 7.2 in the East Village. 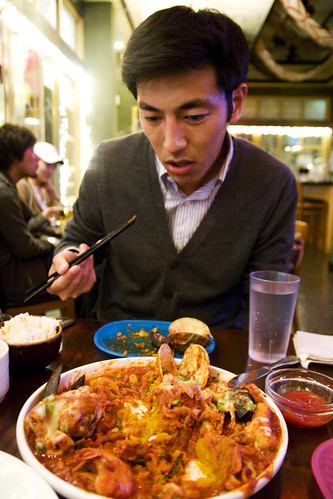 But you know me; I do not inebriate. Because I respond with a face like this, sometimes with more scowling and less enthusiasm. Greg got a mug of beer, although judging from the streams of sweat flowing down the sides of his head and that his face was stuck with a look of blank discomfort, the alcohol didn't do much to ease the effects of the dish.

Not that you have to be drunk to eat this dish. I liked it fine, actually; it wasn't offensive, just a bit overwhelming. Heavy chunks of squash and chewy squid bits and rice cakes and all, semi-bound by mozzarella, coated in some taste bud-slashing spiciness. Would I get it again? Proooobably not. But it was good at the time. I rather like those Korean dishes where a bunch of seemingly mismatched stuff that you'd never think to combine—unless you were particularly desperate or drunk—is thrown together to make something hearty and satisfying, à la budae jjigae. More enjoyable was the half-pound bulgogi burger, which is a great deal for only $7 with fries. I reviewed it on A Hamburger Today, aiming to debunk the "BEST BURGER IN NYC" claim, instead realizing that "burgers" flavored with onion, garlic, soy sauce, sugar, and sesame oil can't not taste like awesome. One of the highlights of the night was when two waiters energetically sprung out of the kitchen with noisemakers while some sort of birthday song played over the speakers (nothing that memorable, I guess) for the party sitting across the room from us. Music blared, lights flickered, and there was a little too much forced excitement flowing through the room...but absolutely none from the gruff employee who stood in the back while flicking the lights on and off in the most stone-faced, unenthusiastic manner ever. Probably because he had done it countless times before. If only he had had a cigarette dangling from his mouth—that would've made it better.

I'd go back to Song 7.2 for the burger, some other platter consisting of a bunch of junk in a bowl, and to see Light Flicking Man in action.

Related
'Surprise, It's Not My Birthday' at Arirang
Korean Food Round-Up: Stews and Noodles
A Week of Korea Food In Mah Belly, Starting with Arirang and Patbingsu
Kåre Week, Day 7: Banchan and Korean Tofu Stew at BCD

Oh man, Satans diarrhea looks amazing right now. (Maybe it's because it's 2:15 AM and I have the munchies)

I love how koreans put cheese in almost anything.. have you noticed that? I know quite a few people that put regular ol' American cheese in ramyun or in kimbab. It sounds kind of nasty..

Hmm...I expected something called Satan's Diarrhea would have corn in it.

dahan: Yeah, I didn't realize how much cheese was in stuff until after going to Korea. Before that, I had had kimbop with cheese in it...not really my fave, haha.

@dahan - Don't knock it till you've tried it. When I don't have an egg at home, I throw a slice of American cheese into my ramyun, and it's AMAZING!!! I bet Light Flicking Man would approve.

Oh lordy, Satan's Diarrhea looks like nachos done right. I would eat all of it, despite the fact that seafood will make me puff up like a blowfish. Definitely worth it.

Hi!
Each time I try to connect to your site (or even change page), my antivirus goes nuts, apparently something is trying to get into my computer...
Did someone else report this?

Nicholas: If you can eat that huge ass plate of curry, you can do ANYTHING!!!

Plume: Holy crap...I did have a problem with my site before, but (I thought) I got rid of the virus thingy. I don't get any errors when I look at it on my computer, and I assume most people don't or else they'd tell me, but give me more information about your computer, browser, and what kind of messages you get when you try to access my page and I'll look into it.

And if anyone else is having a problem, let me know!

Hi! I've also been getting the virus notice on the last couple visits to your site, but it doesn't seem to be much of an issue once I hit "abort connection" (I don't lose any content by doing so). I use Feedreader for my blogs, but I usually open up your site in Firefox.

That dish looks nasty. I'm not sure I could eat it even when drunk- might sent me over the edge into vomiting. Bleh. And you really kinda lost me at scallops and squid. I just can't.

Greg's expression is hilarious! "What the f--k did I just eat?!?"

Haha... the opening lines to this post reminded me of that old Mitch Hedberg bit about being a mumbler but only saying insignificant things...

I think Neptune's vomit may also be a possible translation.
It's funny but Korean food is the one food I have not had any love for. Can someone recommend a place worth trying in the upper west side.
Ciao.

Kelly: Thanks for the feedback! That sounds...not good. So you can or can't access my site after you "abort connection"? :O

auntjone: I think he was also overwhelmed by the spiciness, besides all the stuff in it. It didn't taste bad, just looks funny.

ItalianTapas: Aw, there are so many kinds of Korea food, I can't believe there isn't one you would like (it's not all spicy vats of stuff). I don't know where to eat it on the UWS though; I almost always eat Korean food in Koreatown.

I don't actually live in NYC but I'm going to be going there a couple of times of week. Where is Koreatown?

ItalianTapas: Koreatown is on 32nd Street between 5th and 6th Aves. The whole street is full of Korean restaurants. :D

Sorry, I didn't see your answer to my question where you asked me some details, but I was able to see your site after hitting "abort connexion", and now my antivirus doesn't say anything so I suppose you were able to fix it.