This entry originally took place on April 23. I've just got two more posts to do and then I'm done with Iceland!—and we can get back to my boring life in New York City. Check out my other posts about Iceland to refresh your memory.

April 23 was a national holiday in Iceland: The First Day of Summer. What summer? The summer that took place way back when Icelanders only recognized two seasons, but today feels like you're still stuck in winter, or a cold form of spring. This holiday takes place on the first Thursday after April 18 and, from what I witnessed, gives the whole city of Reykjavik reason to treat the previous Wednesday night like a Saturday night: BOOZIN' 'N TALKIN' LOUDLY UNTIL THE SUN COMES UP.

Melkorka told us it usually snowed on the "first day of summer." "Snow? It hasn't snowed all week," I thought. That's not gonna hap- 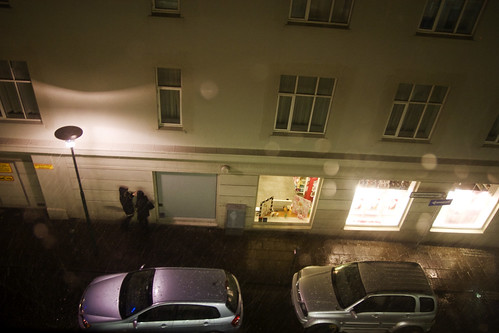 View from our hotel.

...And then it snowed that night. The weather works in mysterious ways in Iceland. Iceland knows of that thing called "normal weather" and just poops all over it. Figurative poop. 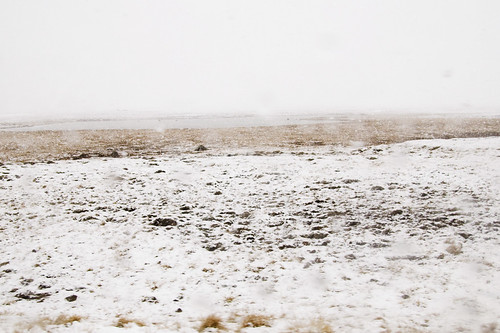 The next day Greg and I ventured back into nature to cover the popular Golden Circle path while Diana stayed in the city center to meet up with a friend. The ground was covered with a thin layer of snow that was mostly gone by the time we got to our destination of... 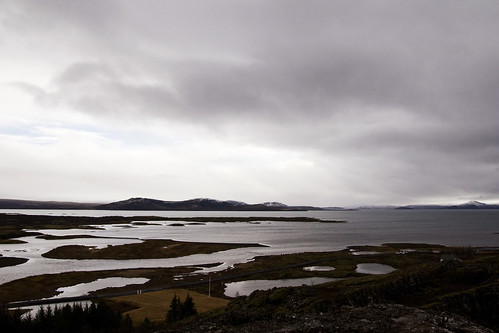 Þingvellir (pronounced like "thingvellir," but with, ye know, Icelandic feeling), the original site of parliamentary assembly and proceedings established in 930, and what is today a national park. 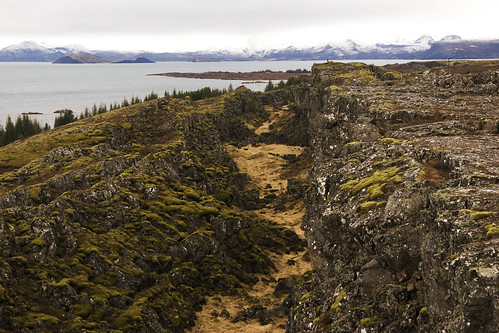 Here is where you'll notice fault lines caused by the continental drift between the North American and Eurasian plates. (That light brown crack in the photo. Yup.) 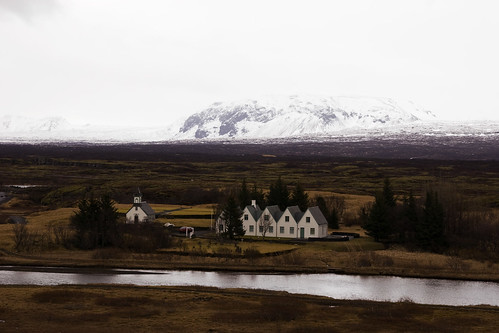 And there are cute buildings. You'll see those scattered about every so often. 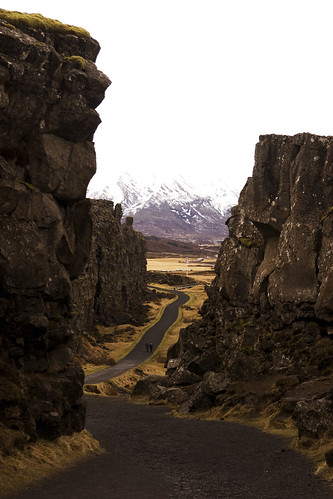 And you might be surrounded by rocks and...stuff. Earth. It's everywhere. 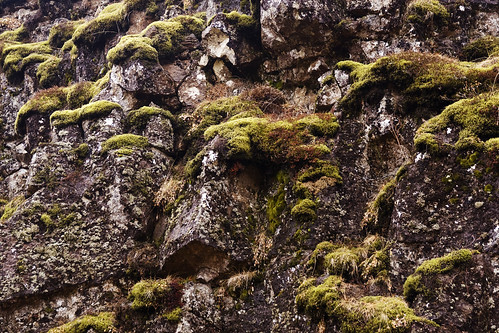 Go further down the path and you'll be met with much mossy-plops-on-rocks action. And lichen. But I'm more a fan of the moss—the way it caps the rocks like fuzzy hats. Or patches of carpet. It's saying, "Sit on me; I'll cushion your butt!" 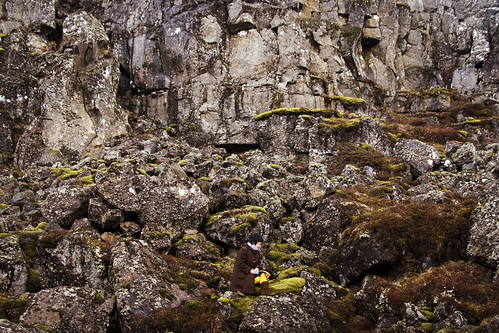 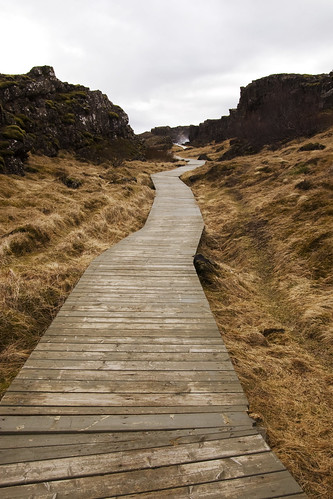 I love me some squidgy path action.

We came across a path to a little waterfall whose name I don't know. But I imagine it's the only one with this squidgy path that prevents you from having to touch the lumpy ground. 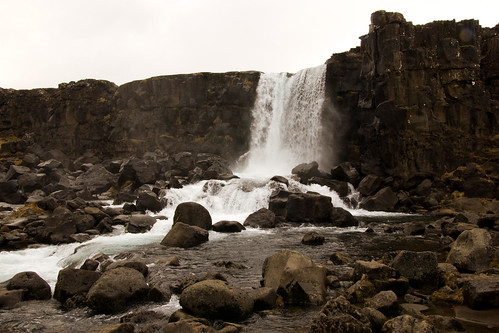 The waterfall was quite small. Still looks neat though. 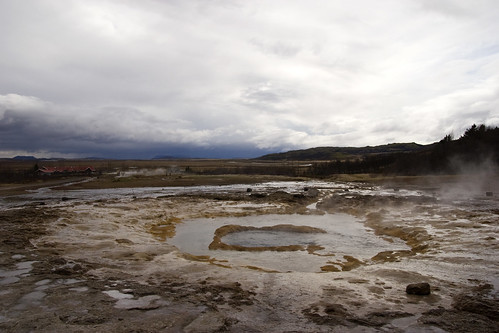 But not as neat as a geyser, or as Greg likes to call it, "Earth's steaming butthole." Sounds about right to me. The steaming earth butthole in question was Strokkur in Haukadalur, which conveniently shoots out a plume of boiling hot water every five to ten minutes. 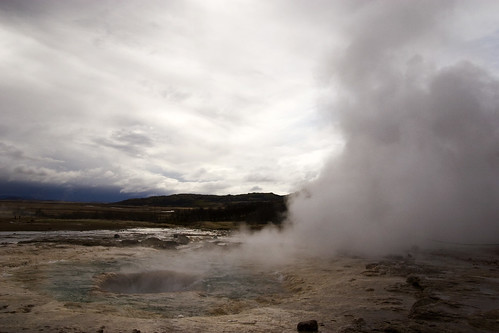 The hole is steaming. You know what that means! A giant blister of water heaved above the geyser's opening and... 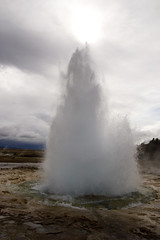 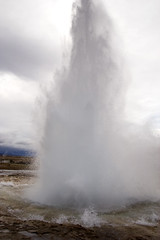 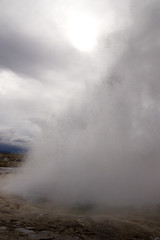 Kablooey. ...Is not the sound it makes. 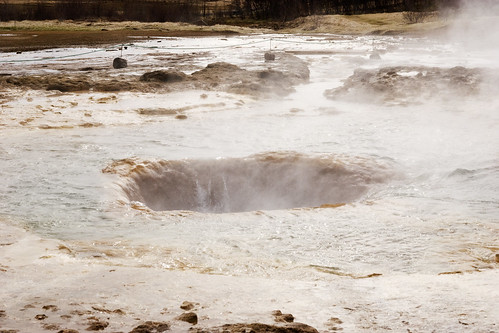 The water quickly drained back into the bowels of the earth. Something about seeing the water flood back into the hole seemed...unsettling. What was down there? How far did it go? How excrutiatingly painful would it be to fall in that hole? Yeah. 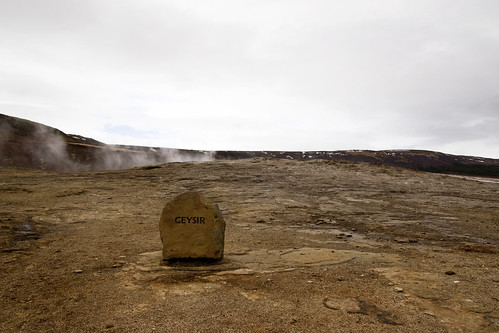 Next to Strokkur is the more famous Geysir, but as it erupts very infrequently, we didn't get to see anything. If not for the sign, I would've assumed it was another non-descript steaming earth hole. 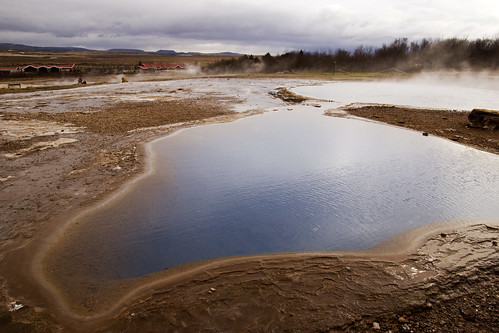 There were also pools of beautiful blue water. If I had had my polarizing filter, I could've gotten a better photo of what was under the water. ...Oh well. 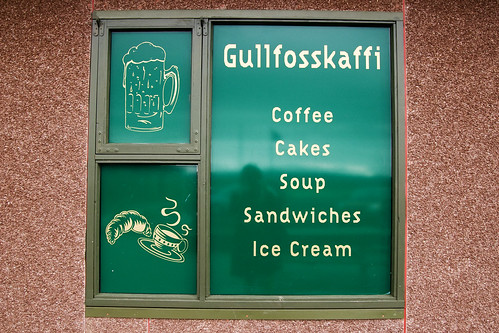 The final stop on our nature crawl was Gullfoss, a frighteningly massive waterfall. But first, we wanted food. 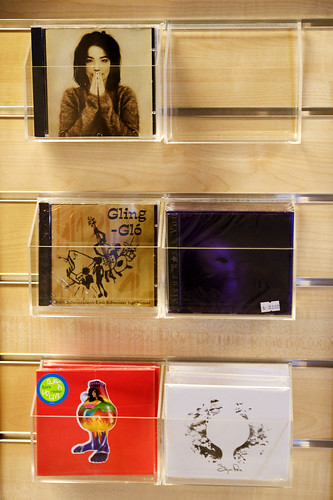 Aside from food though, the Gullfoss tourist center conveniently sold albums by Iceland's national treasures, Bjork and Sigur Ros. (I used to be big fans of both artists, although these days not so much. Favorite Bjork album is Homogenic; favorite Sigur Ros album is Ágætis byrjun. I think my affinity for these albums has to do with when I listened to them though; if I listened to them now I'm not sure they'd have the same value. On that note, if you haven't listened to either of these albums, YOU SHOULD DO THAT NOOOOW, unless you don't like massively beautiful music. Hell, it's mostly because of them that I wanted to visit Iceland in the first place.) 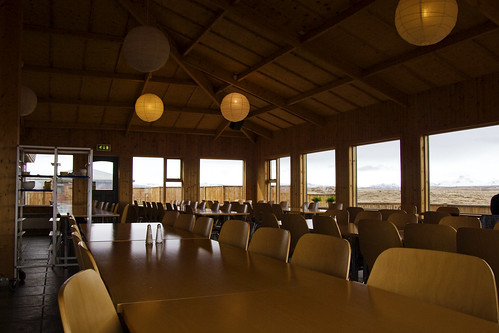 We got some soup and settled into the IKEA-ed cafeteria. I don't imagine that many tourist centers have a dining area that looks like this. 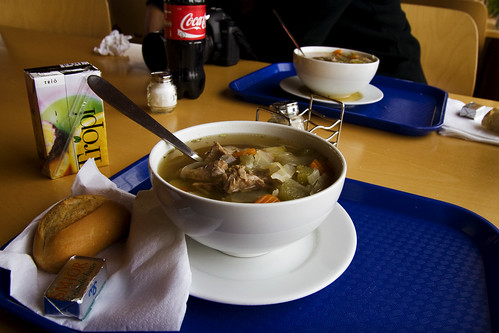 Greg and I got the same dish: the (semi) famous lamb stew. 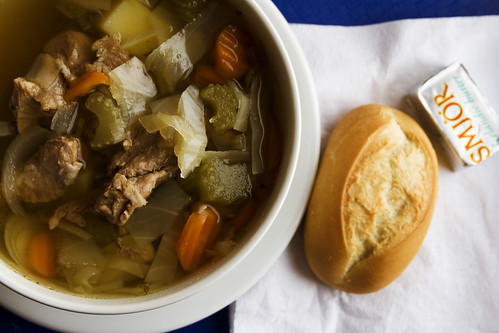 Unfortunately for Greg, the woman behind the counter didn't ladle in as much "stuff from the bottom" as she did for me. Hence, I got more meatstuffs than he did. Aw. I shared my bounty of lamb chunks though, lest put Greg on the path to malnourishment.

The soup wasn't as great as we were hoping for, but it was satisfying enough. The lamb chunks had a good amount of lamb funk (ye know...lamb funk) and we even got some vegetables in our system from all the chopped celery, cabbage, potato, and carrot. Of course, lots of bread helped. 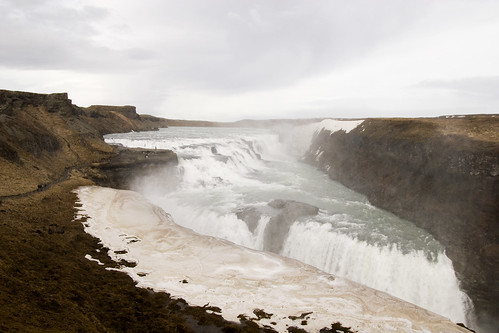 And then, the thing we had all been water for: LOTS AND LOTS OF FALLING WATER. Like. Lots. A lot. It's loud. It's misty. It makes you think about death. Or maybe that was just me. "That would be a terrible way to die," was my general train of thought while looking at the nonstop rush of water over the edge...and then the next edge...and into those rocks...some particles hurled into the air as mist, the rest still a-flowing, never to be seen again. Well, not by me; by someone else, yeah. And the secondary train of thought: "Oo, it looks cool." 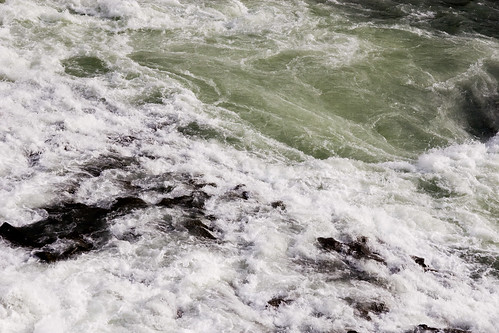 SO MUCH WATER, OH GOD, JUST LOOK...er, it carries much more weight if you're actually there. Yeah. Well. I do what I can. 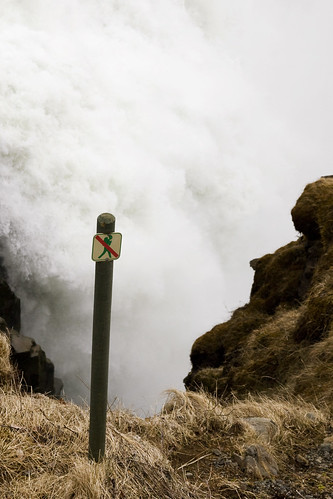 I quite liked the warning signs they posted around the falls. They didn't necessarily look like afterthoughts, but considering the dangers that surrounded us, they were quite little. I mean, the actual sign is only a smidge wider than the skinny post it's attached to. "Do not walk into this crevice or you will be carried away by a rush of water—that white stuff that keeps moving over there and making all that 'foosh' noise—plunge about 30 meters into a river, get crushed by all sorts of competing forces that I can't explain because I didn't pay enough attention in my physics class, but are assuredly lethal, and then...ur ded. And you're pretty much done for because God knows you ignored the sign and now he thinks you're an idiot who doesn't deserve forgiveness."

Yup, that's what that sign says. In my mind. 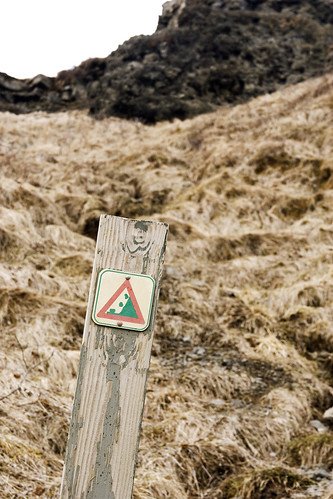 Here's another fun warning sign the size of a thumbnail. This message is easier to figure out: "Beware of evenly spaced blobs rolling down the cliff." 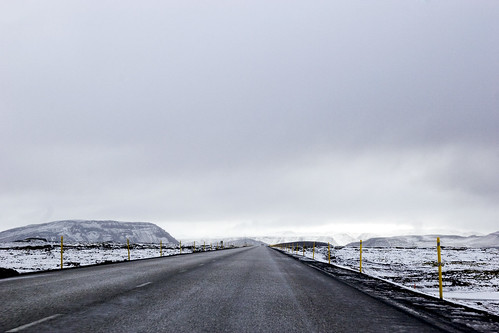 Then it was back to long stretches of snow-coated nothingness as we returned to Reykjavik. For eating! More about that in Part II.

Random note that I didn't know where else to put: Yuizaki asked for Spain food recommendations in that forum I unfortunately neglcet, but it's THERE, for stuff like this. If you have any recs, please share; thanks!

my mom got the same soup too! Think it was more than $10 US. Not really worth it, but at least there was free bread and I loooove bread. :)

I regret not having gone.

Haha, you wore brown. You'd be relatively camouflaged if not for your BRIGHT YELLOW hosiery :D

The signs are so... understated. Is that a feature of Icelandic design? keh :)

I use that th symbol for poking-tongue-out smilies sometimes. It's very handy ...Uh, yeah.

Just found your blog. I've been looking for a smarmy food blogger from NY for a while and am glad I found one!

Smarmy??? Read again, Jen. Roboppy is the least smarmiest out there.

hey robyn i just wanna say... your pictures of those rocks and cliffs are just BLOODY BEAUTIFUL. makes people in singapore really wanna go there for good =D

Really is a beautiful country but snow on the first day of summer! guess its not a place for sun seekers

Kim: The bread made it all better. Or else we would've been hungry after eating the soup!

D: You can life...through...THESE PHOTOS!

SuperChomp: Maybe it's just an Icelandic thing.. ;) But better to have tiny signage than none at all!

OH MAN when I was in middle school I loved making the "th" thing for tongue poking out-age.

Jen and Michelle: Maybe I am something else that sounds like SMARMY?..wait am I?

Katherine: Thanks! I WANNA GO TO SINGAPORE!!! Even if it doesn't have the cliffs and stuff.

Edd: Haha, not for sun seekers, although I think we were especially unlucky to not get much sun during our vacation.

I just wandered over here from another Blogher network blog. I had to stop and leave a comment just to say how wonderful these pics are.

I really want to go to Iceland now! I'm even annoyed that our holiday is already booked. Maybe next year

Sophie: Thanks for wandering over! Iceland is definitely worth checking out at some point. :) I hope you get to go!

This is weird.
I was in the exact same place when it was covered in snow, and it looked completely different.

What's more, is you may actually have sat in the same seats that we did when we went in that place.

Graeme: THAT IS WEIIIIRD or awesome? :)

Oh man, your photos are awesome! Love the snow.

did you go to blue lagoon as well? (haha i'm just skimming and too lazy to read everything on every post)

Planning to go to Iceland in a two months and have loved reading your blog and seeing the photos - you have great suggestions! I was wondering where exactly we would stop to see "moss on rocks" and "walking thru rocks" and the "path to waterfall" above? Are they in "thingvellir"? Are these sites marked? Or did you just pull over? We are there for a couple of weeks and renting a car so we really want to pull over and see everything possible in nature - like the above. Any specifics would be GREATLY appreciated. And thanks for sharing all this great information!

KC: The moss, walking-through-rocks, and path to the waterfall are at thingvellir, yup! I'm pretty sure this stuff is marked. Greg did the driving and didn't seem to have any trouble finding anything.