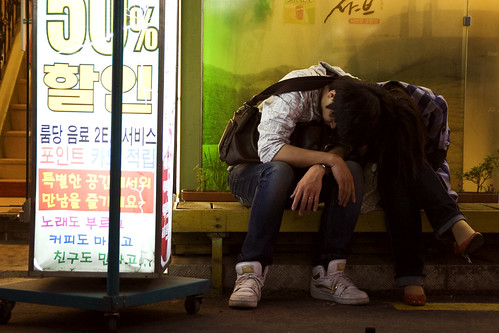 This is how I felt on Tuesday.

Oh hey! I got back from Seoul on Tuesday and felt a bit like the (probably) drunk couple in the photo above. Assuming they're really tired.

But after a few days of forcing myself to switch my internal clock by 13 hours, I think I'm back to normal, "normal" being "not going to bed until after 2 a.m." I am healed!

Seoul is awesome. If you wanna go to Asia and can't decide between Japan and China, go to South Korea! Ha. Just kidding; it's not a last resort. You should want to go because it's got lots of food, lots of beer, clean and cheap public transportation, lots of shopping, lots of food, and it's much more "The City That Never Sleeps" than NYC could ever be. It's a crazy place. I'll be writing more about it on Serious Eats (I hope to get more posts up next week), but I need to give a shout-out to some of the awesome Seoulites (or just-beyond-the-limits-of-Seoulites) I met during my trip, because without them, my visit would've been only 10% as awesome. They're entwined with my memories and initial impressions of the city. Let's take a look. 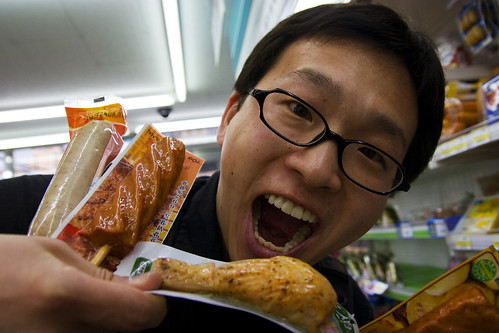 What meatsticks see before they die = DAN!

Dan: Dan greeted me at the airport with a sign that said "ROBYN PACE LEE aka ROBOPPY aka The Girl Who Ate Everything aka Gelato Monster aka," which is, by far, the best sign anyone's ever made for me in my life. Not that many people have. But now you know what you have to top. Ahem.

Dan was my guide for the week. Without him, I would've ended up being lost in a web of NOT KNOWING WHERE TO EAT and...well, I wouldn't have had a place to stay because he donated his couch to me for a week. He's totally chill, funny (even funnier after a few beers, HYUCK), helpful, thoughtful, and generous. He made me rethink how I host friends who stay at my place; basically, I'm not very good at it. He's a special dude and you should all want to be his friend, but he's really busy so ...maybe not...oops. 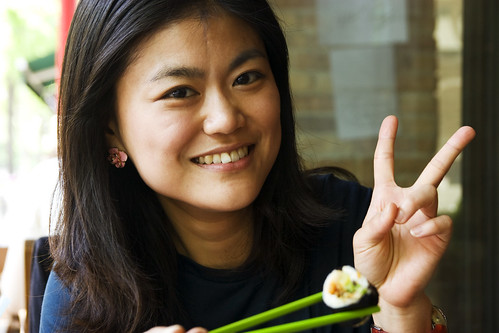 Terry: I am not surprised that Terry and Dan are good friends; they share a lot of the same qualities. Well, from what I gathered after hanging out with her a few times. :) Also chill, funny, helpful and OH DUH, lovers of food. Of course, all these people are food lovers. Terry is super sweet and I'm grateful she showed me a bit of Seoul on my first full day in the city when I was feeling discombobulated. 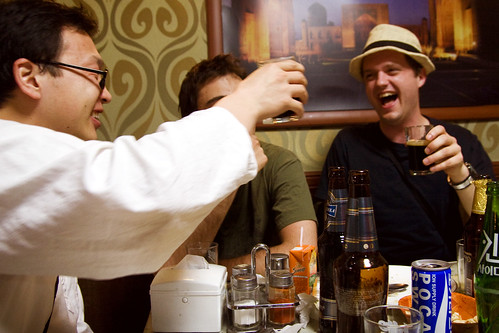 He's the happy one on the right.

Rob(oseyo): He's a strange one, but the good kind of strange that I gravitate towards. After meeting me just once, he made me an awesome map of places I should eat at, not that I could figure out where anything actually was...which was okay because he played tour guide for a day and filled my belly with awesome hotteok, soondubu, and other Korean delights. He's much more helpful and nice than he needs to be, which seems to be a trend in the "friends of Dan" camp. But the best thing of all? HE LIKES DAN DEACON! Win. 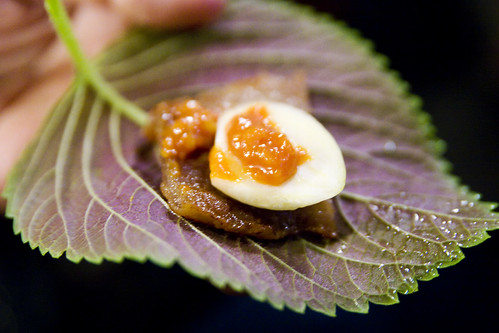 Not a person, but this was recommended to me by the person in question!

FatManSeoul: YOU KNOW SO MUCH ABOUT KOREAN FOOD AND LIKE...EVERYTHING MAYBE...I don't know why your head doesn't explode, and I wonder if my brain has the same capacity for knowledge. Considering that I'm not fluent in any language aside from English, I'm thinking, probably not. You're an indispensable guide to belly happifying. And much too nice. ("Nice" is really boring. Maybe I mean "genuine." Maybe I need to expand my vocabulary.") 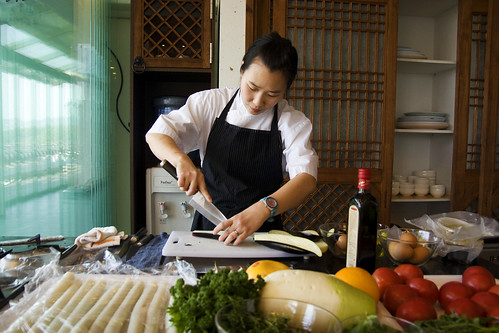 Rachel: (Doesn't live in Seoul, but is originally from there, so that's close enough!) I've never hung out with a chef who's the head of her own restaurant before, but I hope most of them are like Rachel. Friendly, laid-back, fun to hang out with, knowledgeable about food (of course), always willing to help, and overall awesome. I don't know when I'll ever get to eat at her restaurant in Seattle, but it's on my "to do" list (besides..you know, "visiting Seattle"). OR GO TO HER RESTAURANT FOR MEEE. 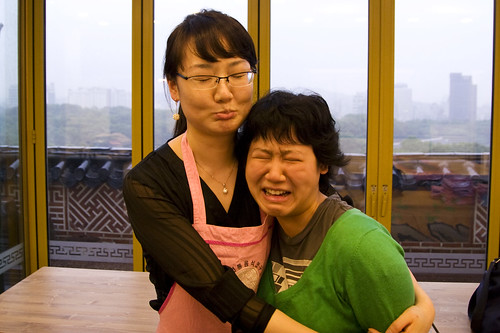 Soo: Soo is first place in line to be my Fake Older Sister. OR...REAL OLDER SISTER. I don't know what it is about Soo, but it was like "AW, HEY, I LIKE YOU" at first sight. But she's so ridiculously bubbly and positive even when I sense that something in her just wants to lie down and take a nap that I think most people would have that initial feeling. On top of all that, she's a great hugger. Her only problem is working too much. NOOOO, SOOOO!!! 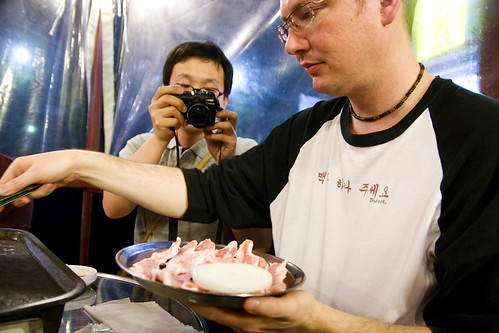 Joe: Out of everyone in this post, he's the only person I met once! Sadness. But he left a good impression of weirdness and funniness and helpfulness and all the other good things that end in -ness. One of the main things I remember about him is his sad story about living near the space center in Huntsville, Alabama, yet never going to Space Camp. It's okay, Joe...[pat pat]...it's okay. Hubble (Dan's dog): Hubble greeted me every day in a frantic, ADD-like manner as though seeing my face was the most exciting thing on earth, aside from chewing on a pillow. Admittedly, he did that with every person who came into Dan's apartment, but I felt kind of special. For a brief moment. Ah, unconditional love from a pet is a beautiful thing.

Hey there. Glad we got a chance to meet, and thanks for the props. I had a hella fun time showing you around: being a guide is acutally my favorite thing to do. I look forward to seeing more of your reporting on the Seoul trip.

Aha. Definite thanks to all the people who made your trip awesome, so that you had grand things to report about when you got back! I don't think it would have done any good if your SE write-ups were all full of meh and blub. Yay for warm hospitality from people you just met on the other side of the world :)

I'm getting a little tear in my eye. I can't believe you forgot to say goodbye to Scarecrow!

I wish my schedule didn't cripple me so much from heading into Seoul on weekdays. We tried to get you to join us at Star Chef on Saturday, but I see now that Rob was really taking you on Le Grande Tour. And you can see from the site that we were near the DMZ on Sunday.

But I'm glad I got to meet you as briefly as I did. I'm still thinking of that hangjeongsal (the pork neck from the first night). I love that stuff!

I just came across your blog though Running with Tweezers and had to comment that the photo of those two is hilarious!

I bet your trip was awesome... I would love to go to Seoul.

Rob: If you ever visit NYC, my tour guide abilities won't be nearly as good. SIGH.

SuperChomp: YAAY, MEANINGFUL MATERIAL FOR MY SE POSTS! And uber kindness from people who don't really know me. I'm a lucky person.

Joe: egad how could I forget, GOODBYE, SCARECROW!!

I'll have to make my way to the DMZ the next time I visit. Fun times!

Stacey: You should go to Seoul. Cos it is awesome! Just brush up on some Korean phrases before you go..cos I so failed in that department.

It was a pleasure to have you around. Hope you get back here soon for more eatin' ~ there's so much you never got to try!

sounds like you had fun! What was your favourite neighborhood in Seoul?

that's so cool you've met so many great people. Now you're an int'l friend of the world. :)

Fatman: I'm also on the lookout for such dishes in NYC. Tomorrow I'm gonna get that ARMY STEW! Haha.

Sohee: Ooh..I didn't get acquainted enough to have a fave, but the one I was in the most was Myeong-dong. And then Insadong. I guess those are the tourist-friendly areas.

Kim: YEAH! At least, the part of the world that isn't creepy or meat. ..YEAH!

Aw, looks like you met some really great people, which is almost as good as getting to eat yummy food. Almost. The meat sticks Dan were holding look odd, almost reminds me of popsicles.

Jasmine: The meatsicles made me go "HUH" as well. And they're in seemingly every convenience store!

I miss you already! I just wanted to say that you've been doing great and I love the photos! Wow!