This entry originally took place on April 3 and 4. Gonna speed things up a bit because I have to go to the airport soon..oh crap.

When Alex comes to down that means two things: elevated level of happiness and vegetarian food. Because Alex is a fuzzy ball of happiness, and he lives a meat-free life. 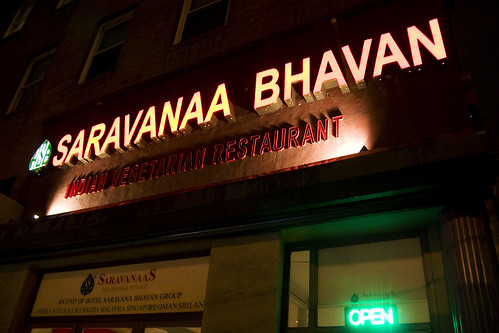 Our first vegetarian stop was Saravanaas, a South Indian restaurant in Murray/Curry Hill with lots of dosas, savory lentil and rice-based crepes. But first, there was poori. 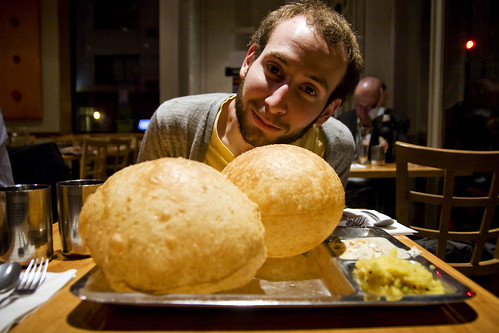 Round, like Alex's head! Or my head. Or your head. 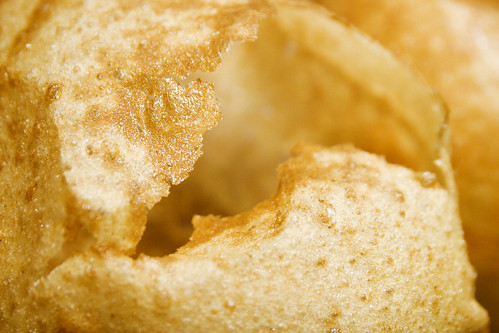 The bread was super thin and crispy, cracker-like in some areas, softer in others. But it wouldn't have been as cool if it weren't balloon shaped 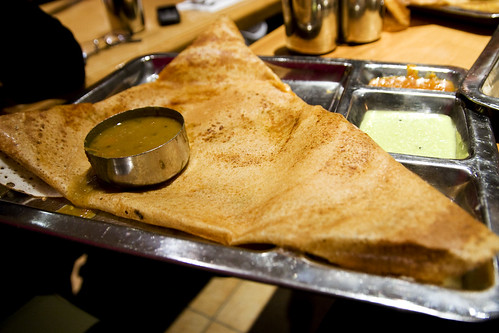 We both ordered dosas, mine being the kara dosa, a crispy crepe filled with a layer of spicy onions and potatoes. Don't let the flatness deceive you; it's filling. You're eating a form of rice and mashed potatoes. The dosa came with three condiments, I think sambar and some chutneys, but my lack of Indian food knowledge means I DON'T KNOW WHAT I'M TALKING ABOUT.

Overall, it's good stuff. You should check it out if you like dosas or have never eaten one before. 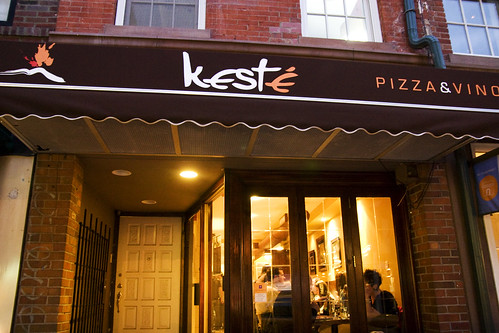 The next night we tried Kesté in the West Village, a new pizzeria I wanted to try after reading about it on Slice. 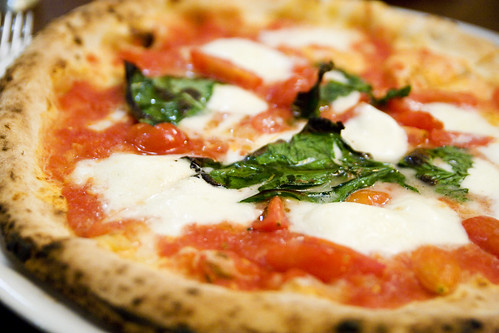 Regina Margherita is probably my favorite combination: grape tomato, buffalo mozzarella, basil, and extra virgin olive oil. Buffalo mozzarella = love. The crust was great—thin but not super-thin so that it could hold up the toppings, slightly chewy, with a bready outer crust, and..flavor! It haz a flavor. Wheaty flavor. I don't think I really understood how much flavor a crust could have until I once had a crust with no flavor; it was like chewing on nothing. So sad. 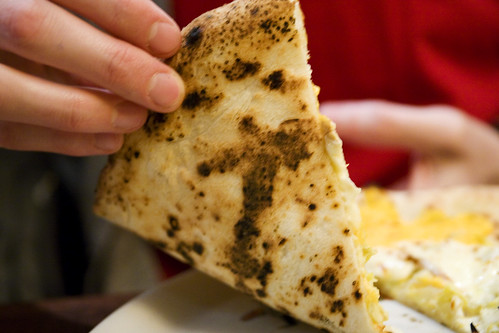 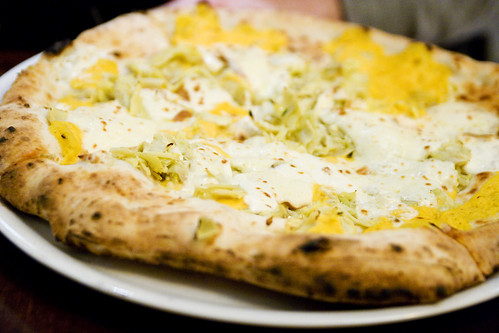 The Pizza del Papa was less successful. The toppings sounded awesome—butternut squash cream, smoked mozzarella, and artichoke—but there was too much smoked mozzarella, which overwhelmed just about everything else (although even on its own, I don't think the squash cream had much flavor). Without tomatoes, it tasted like it needed an acid kick. Of course, it was still tasty because the crust is awesome, but it wasn't balanced like the margherita. I want to go back and try other pies, but I mostly want that margherita again. 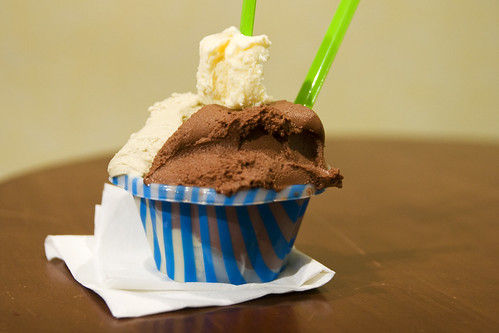 We couldn't eat in the West Village without stopping at my favorite gelateria, L'Arte del Gelato. But moderation beat gelato-gluttony and, for the first time in my life, we shared a small. A small! But that small cup of chocolate and pistachio gelato was enough to satiate our swollen bellies. I though, "This would never happen with Kathy"—she would surely order a large—but it's good to have a break every now and then. ;)

As long as the break doesn't involve not eating gelato.

fly safe, fly safe! and have piles of fun! it's gonna be so boring here without you ^_^

Wow. Poori is awesome. Although it makes me imagine the chefs with bicycle pumps in the kitchen... :]

@robyn: Just to let you know, I didnt interpret your comments as dissing vegetarians at all. Your comments have been pretty consistently about loving food, and pointing out what you like and don't like, irrespective of what others like and whatever personal reasons they might have for their food choices.

If someone made that sort of comment at a dinner party, that's where everyone else would just go quiet and look at each other, before going back to having fun.

Kathy: It ain't the same here without youuu! You'd prolly find a way to chat it up with the Icelanders. :)

SuperChomp: I think it's pureed butternut squash..with possibly other things. ;_; Yeah, that' not very helpful.

Kell: Thanks for your support! I feel like I have to be more careful about what I say regarding vegetarian food from now on, but I like it plenty. Just like non-vegetarian food though I don't like..all of it.

Its weird but i live in Bradford in the UK, one the cities with a very large Indian population and a huge variety of indian restaurants, but ive never eaten Indian vegetarian food. Whats weirder (to me at least) is that it takes someone across the world to convince me to go.

I hope you have a fabulous time in Iceland! I can't wait to read the posts.

Poori and dosai (or thosai depending how you spell it). Awesome! Hope you have a chance to try rawa dosai next time you are there. 10x awesomer with a mix of onions, pepper in the thin crispy Indian crepe. Or ask for a ghee and sugar breakfast dosai, supper yummy.

Ooh Saravana Bhavan :D I used to be a regular at the London branches but sadly live too far away. However I am currently in NYC for the week and going there for lunch today (I've also been to the Kuala Lumpur branch hah).

There are altogether too many food options in this city, I've got confused already and I only arrived last night.

Haaww, Saravanna Bhavan in NYC! I think that looks like coconut chutney and gunpowder. Was the red thing really grainy and hot? You should try a dosa with meat sometime, real good. Lunch staple on most days.

Ms. Blake: I never tried Indian food when I was in the UK..oops. Next tiiime.

Reese: Sugary dosai? I haven't seen that before, but it sounds like my kinda thing.

Alice: I hope you're having a good time here! Natural to be confused at first, but I think it's somewhat easy to get situated. At least the city is laid out in a grid. If not for that I would be doomed.

Srin: I don't think any of the condiments were VERY hot; things were just a little spicy. Maybe it's just weaker here. As for dosa + meat, never tried one (not sure if I've ever seen one)...sounds good.

I've just had Dosa for the first time last weekend at this place called Dosa in SF! I LOVED it! It's even better than Naan to me.

Saravanaa Bhavan used to be my fave place when it was still called Dosa Hut. There is no decent Indian food in the city of Santa Cruz, no truly stellar South Indian/Gujarati chow for miles and miles despite large South Asian population in Sillicon Valley. I miss Curry Hill!

The confusion is mostly too many places I want to go to and too little time! Plus trying to work out where everything is. I think I will have to come and visit again! (And plan better next time, and do some booking in advance, and ask more opinions).

I didn't find Saravana Bhavan food here as hot as the UK or KL branches I've been too, except for the kara dosa. It was pretty tasty all the same though :)

Yes, I think you will enjoy it a lot. It is a breakfast treat, though I dont see why they can't have it on the dessert menu beyond the usual gulab jamun or kulfi. Ask your server for it next time, I am sure the chef will be happy to accommodate.

Hehehehe... I did not knew that there will be indian food lovers....

survana bhavan started off few decades ago.. it use to have small shops... i use to take it in as lunch for tiffin boxes.. it became instant hit in south india.. nice to know all over world our food is liked...

u guys did not eat north indian food... we have lot of cuisines from sweet to spicy stuff...

poori's are small.. but actually its called "chole bhature"