This entry originally took place on April 18 during my trip to Iceland from the 18 to 24. In case you're not up on Icelandic news, they're currently in mega economic pooptown (or, if you prefer the more official term, "financial crisis"). I'm only going to mention it in this intro because...well, we certainly wouldn't have been able to afford going on this trip if not for the unfortunately bank implosion, but it's not an issue that presented itself during our trip, nor am I in the position to give a lesson on Icelandic economy. Basically, if you thought Iceland was a prohibitively expensive place to visit before, it's not now. Someone better educated in global economics and banking could tell you more. For now, I'm making do with this article by Michael Lewis and these posts by Iris Erlingsdottir. 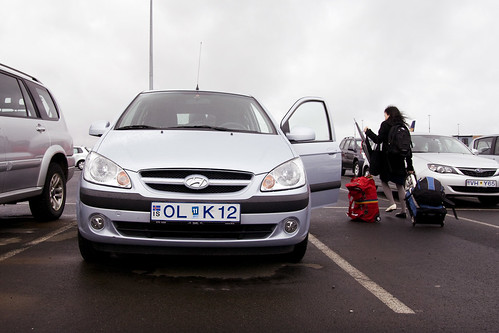 Get in the car.

After Greg unbuckled his seat belt and opened the door to stick our ticket into the airport parking lot's exit gate, the gate's yellow bar rose to let us through. He rolled the car forward a few feet before stopping to put his seat belt back on. And then the gate came back down. Which would've been dandy if we hadn't been on the wrong side of it.

"Uhhm," said Greg. "I thought it would stay up until I went through."

"I thought it was on a timer," said Diana.

"HAHAHAHA, GREG, you fail" I thought. And maybe vocalized. With guffaws.

He stepped out of the car, pressed some buttons to activate an intercom, and after explaining our plight to the woman on the other end of the line she let us through, probably while thinking, "Oh god, these dumb tourists." But I hope we made her day just a tad more interesting considering that a regular workday probably doesn't involve interacting with that many people leaving the parking lot. 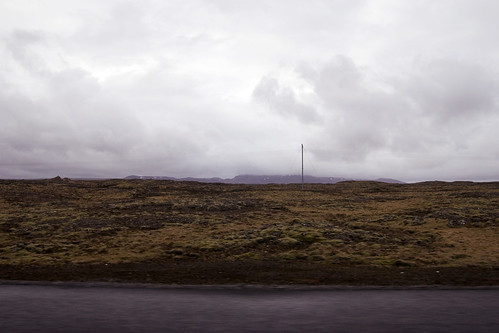 Greg drove our jetlagged bodies past the 50 or so kilometers of lumpy, bleak, patchily grassy terrain to get to Reykjavik from Keflavik. During most of the car ride as we passed large stores (mostly Bonus, a discount supermarket), including a huge ass IKEA (probably no larger than ones in NY/NJ, but set against the backdrop of nothingness, it looked ominously huge), office buildings, and other such places, the three of us—that is, inhabitants of a city that, with more than 8 million people, is about 25 times more populated than Iceland—were struck by how much stuff there seemed to be for not a lot of people. (Or perhaps it felt like a lot because it was spread out.)

But I don't mean "a lot of stuff" in a bad or unpleasant way. Once we got to Reykjavik we found food, art, shopping, music, housing, and more all conveniently located within a small area. "If I lived here I'd run into the same people every day" small. Many houses are cute, many office buildings and shops are sleek and contemporary, and everything feels clean. It's a level of being polished I used to only associate with Disney World until I visited Bergen and realized, "Oh, small cities can feel organized, clean, and safe without being owned by a multi-billion-dollar media corporation."

Of course, it's not at all like Disney. It's...real. People have lived here for over 200 years. And judging from the various shouts and laughs, booming basslines, and humming of cars we could hear from outside our living room, they like to party on Saturday nights. (We were later warned that drunk people might bump into us on the street late at night, but "don't take it personally"; they won't hurt you, they're just totally out of it.)

And we could hear so much because we stayed at Room with a View, a centrally-located apartment-style hotel. Ian and Moriah recommended it to me, and now I'm passing the torch on to you guys. Aside from the noise that comes with living off a major road, this place was sweet. Even before we saw our rooms it was sweet. Let me explain. 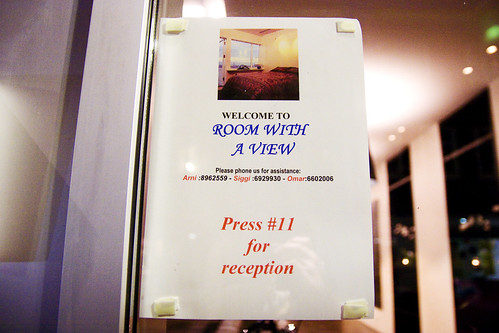 First off, how do you find this place? It's located next to a Penninn and it doesn't have a distinct sign; there's a keypad next to sliding class doors with a letter-sized paper indicating that you have reached Room with a View. If you have a car, there's a tiny parking lot around the corner of Vegamotastig and Laugarvegur. When we checked in, the woman at the counter said it wouldn't be ready until 1 p.m., which sounded like an eternity considering it was only about 9:30 a.m. at the time and we had lost a night of sleep. At her suggestion, we went across the street to a cafe so Greg could get a cup of coffee and jolt himself awake with caffeine. 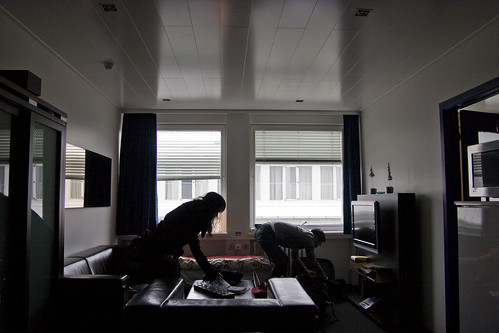 It turned out the original room I chose wasn't big enough to hold all three of us anyway (I don't know why that wasn't figured out sooner, but I won't complain), so we were put into 402, a one bedroom apartment (there are two singles in that room and a roll out bed in the living room) with way more furnishings than my apartment in Brooklyn. There's a dining table with four seats! Holy crap! And a fridge. And a microwave. And a toaster. And pots and pans and utensils and dinnerware. And a flat screen TV that we won't use. And a long mirror over the sofa that we did use. 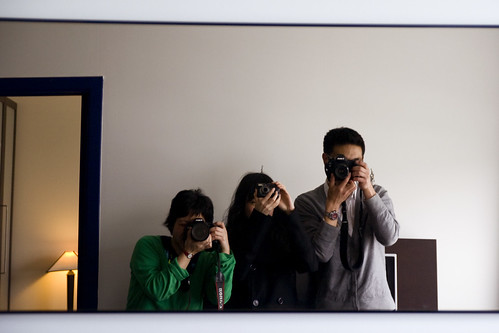 And then some. If only I could furnish my apartment as well. Oh yeah, and don't forget about the free wifi. How much did this cost for six nights? With the current exchange rate, only $212 per person. Damn.

First things first: sleep. We all took and didn't stir until sometime after 3 p.m. When our bellies gurgled in need, we realized we to shut them up with food. But where to eat? Um....uh... 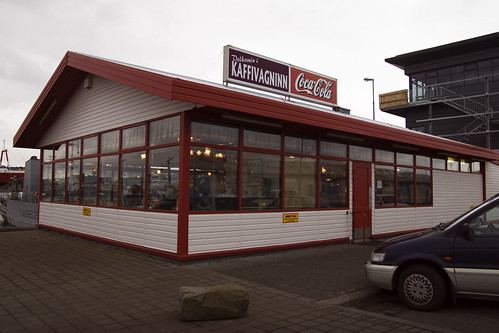 Unsatisfied by the restaurant choices on the main strip (besides that it was an odd time to eat a meal), we hopped into the car and drove to Kaffivagninn down by the docks, hell yeaaaaah!!! They had a dwindling display of cold sandwiches, sweets, and other random things that I wasn't familiar with. It turns out we got there just shortly before they removed the savory food from the case. Lucky us.

So what did we end up with? Um. I don't know the names in Icelandic, so here's what you get. 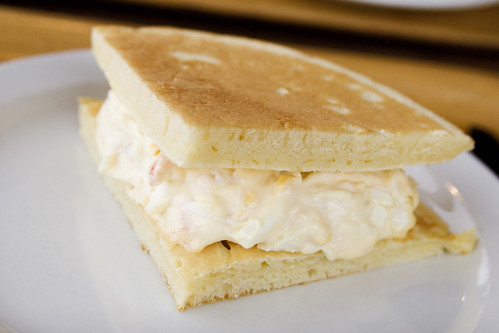 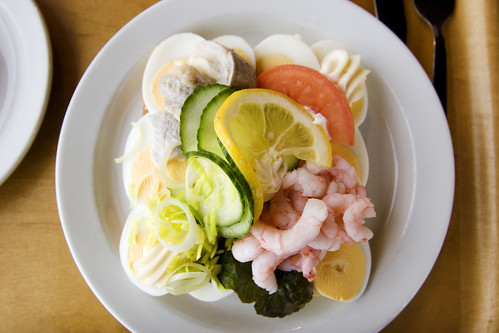 Open faced sandwich with shizzloads of stuff on it: A slice of white bread covered in a layer of sliced hard boiled egg topped with lettuce, a slice of tomato, a few chunks of pickled fish (herring?), pile of shrimp, thinly sliced cucumber, lemon, and gobs of thick mayonnaise. Another "not something I'd dream about, but I'd eat it again" sort of dish. I'd like it more without the raw tomato. 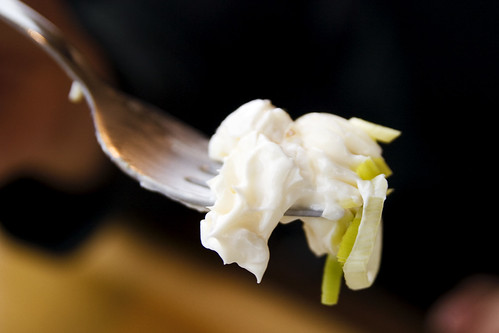 To illustrate the thick gobbiness of the mayo, here's a close-up. Mmmmm. 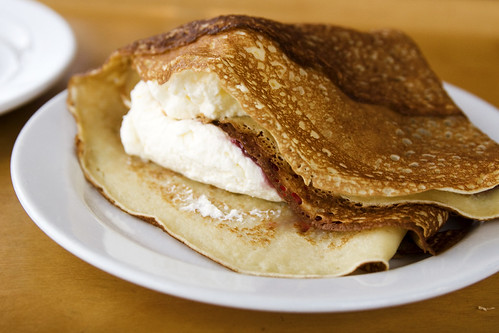 Pancake stuffed with whipped cream and jelly: This pancake (pönnukökur) is of the uber-thin, crepe-like variety. Icelandic whipped cream is thicker than most (or maybe all) other whipped creams I've had. SO GOOD. Kathy would approve. 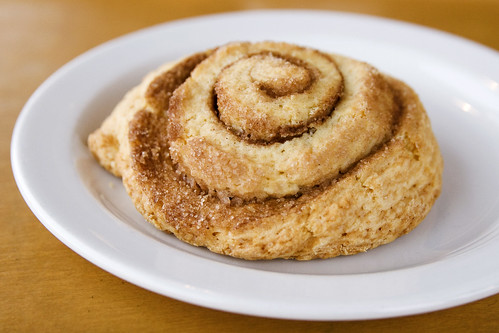 Cinnamon roll cookie: A cinnamon roll-esque sugar cookie with cinnamon and sugar hidden within the folds. A bit dry, but not bad. 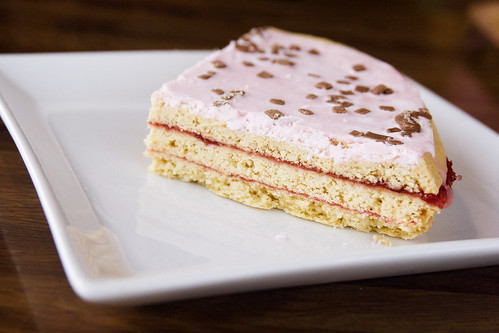 Triple layer cookie and jam thing: This vendor at Kolaportið calls it glassúrterta, although I think that just means glazed cake. This "cake" is made of three large sugar cookies layered with jelly (strawberry?) and coated with hard icing sprinkled with mildly perceptible chocolate bits. 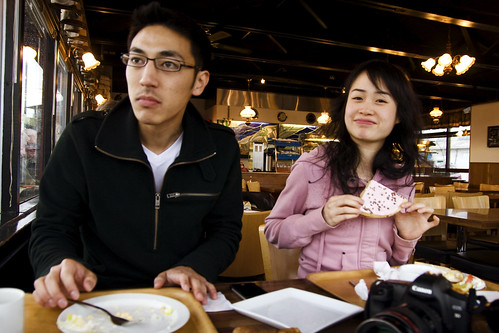 If you're sitting across from Greg and Diana, you might see this. (Thanks for looking at me, Greg!) 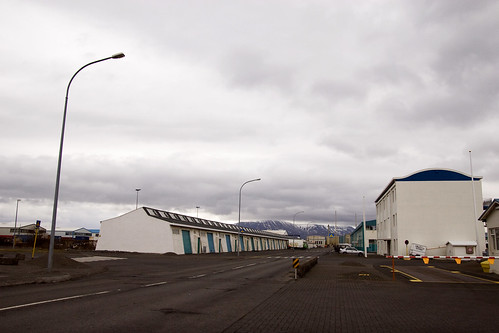 Go outside Kaffivagninn and to your right you'll see lots of...whatever these things are. 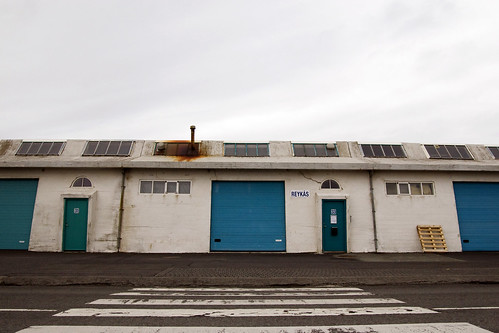 I particularly liked the varying shades of blue on the doors. 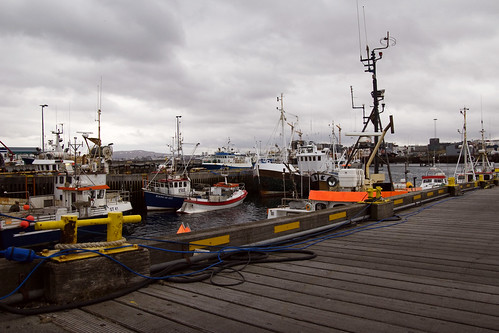 Walk down the dock for BOAT ACTION. 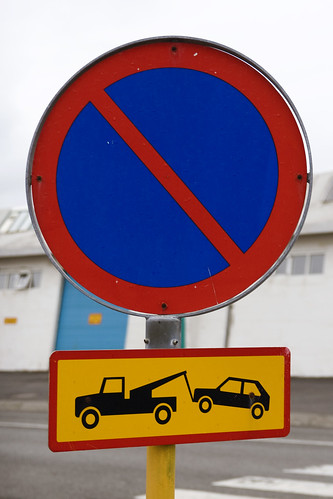 Park by this sign and you can say bye-bye to your car.

You're right about reception lady - how nice are the people? Jeez.

Seems as though your first day was a bit dull weather-wise, but that place is well sexy when it's all covered in snow.

Most of their energy goes to aluminium production, since they have no natural forests. Fact WIN! :)

Open faced sandwiches are awesomeeeee, I just don't know where to start sometimes. The pancake sandwich is an interesting concept, but I generally prefer my pancakes unsavory. THE DESSERTS LOOK AWESOME. Especially the pancakes. I need some. Right now. Looking forward to the next entry!

yay! your re-accounts of the travel is always down to the point with a nice Robyn Lee whimsical style. some of the moments that were comical in person are still comical now as I chuckle recalling them again. looking forward to the rest of the entries!

Sweet deal on that room! Waiting for the rest of your posts!

Wow. That is a niiiiice apartment. I can imagine for that amount of money, it's so comfy you might want to live there permanently O_O

Open-faced sandwiches are cool. Like proper burgers (that don't come wrapped in waxpaper) they are a humble food except upgraded to the point you have to eat them with a knife and fork :D

I look forward to seeing some Skyr in your future post. :)

Graeme: Every day was rather dull weather-wise except the day we left. But of course. :P

I think I saw an..unnatural forest somewhere! A spot during a trip to Gullfoss with a bunch of trees. And then it went back to nothingness.

Jasmine: I like sweet pancakes more too. Maybe if it had been a..pudding sandwich..mmm.

D: MOAR ARE A COMINN! And then you'll hopefully make a travel photo blooog.

Su-Lin: I wonder how much the room cost before the economy went poop. ;_;

SuperChomp: I'd totally wanna live there permanently. SIIGH. It's only a few hundred bucks less per month than my current place. How sad.

Kathy: It was like whipped cream that didn't melt. Haha. FAT-TASTIC!!

Man, Greg is hot. Oops, did I say that allowed?

Audrey: If you think he's hot, you haven't see this. HAHAHAHA.

Enjoyed reading this, and impressed that you found Kaffivagninn - not the sort of place tourists usually head to of their own accord. It's where the old fishermen hang out, as you may have discovered. And those garages with the blue doors are for keeping boats in.

Just a couple things: actually 120,000 people live in all of Reykjavik, not the city centre which, as you discovered, probably doesn't fit more than 1,000. 170,000 people live in Greater Reykjavík, including the place where you saw IKEA. And also, people have been living in Reykjavik for 1,100 years. The first settler built his farm there.

Sorry to be so pedantic - just can't resist. :)

Alda: It's good to get my facts straight! I designated city center as "not Greater Reykjavik" but I guess it makes more sense to just call that Reykjavik.

We happened to drive by Kaffivagninn by mistake when we were...mm...lost on our initial drive from the airport. :) (Now Greg would be a pro at driving around the city, har har.) And as soon as we passed it we were like "WE GOTTA GO BACK THERE."