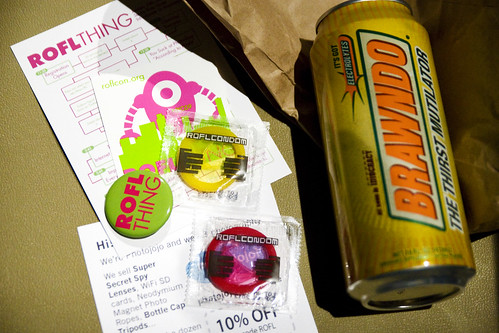 I popped the can open with a satisfying [klnkshzzz]. (I bet there's a better onomatopoeic word for that, but I'm too lazy to look it up.) The power of the carbonation propelled a split-second mist of liquid that moved too fast for me to see, but I saw its remains in the form of bright, nearly phosphorescent yellow-green beads around the top of the can. Sweet. Jesus. Was I going to drink this stuff?

Yes. I was thirsty. And I'll try anything at least once, even if it's based off a fictional beverage from a movie called Idiocracy. I've seen the movie, which isn't necessarily something to be proud of. (But it's kind of an awesome movie from a design point of view.)

What is this beverage? It's Brawndo, THE THIRST MUTILATOR. The can explains more:

If you haven't seen the movie, you're probably thinking, "What the frig?" Basically, in the bleak future when the average IQ is -34, anything that water would be used for (except for what's in the toilet) has been replaced by Brawndo. Meaning that they also use it to "water" their plants. Which is why the food supply is going to shit. Because, despite what the can says, plants can't live on Brawndo.

I just thought I'd set that all up for ya.

So what does Brawndo taste like? I...just...don't know. Like some sort of mildly tart candy, but not as sweet as Red Bull, which I've only tried once in my life because one sip was all my body could take. Brawndo tastes like nothing found in nature. It tastes green. And yellow. And glowing. God knows what these chemicals are doing to my kidneys right now. I'm going to wake up tomorrow morning a completely different person/species. That is, if I actually go to sleep. I think this stuff is supposed to pump me full of "awake" chemicals, which I like to believe have no effect on me because my lethargic tendencies cannot be broken by mere drugs.

In conclusion, I don't know why anyone would ever buy Brawndo and drink it on multiple occasions unless they had no taste buds or wanted to collect the cans or really, really liked Idiocracy. What's my excuse? My can was free from ROFLcon (along with the...uh, Roflcondoms) and when something is free, new, edible, and unlikely to kill me (right away), I ingest it.

And then I blog about it. For you.

Item: Brawndo
Price: Free / my dignity / my health
Size: 16 fluid ounces
Acquired at: ROFLcon
Rating: ...eeeuuuh.
Pros: Safer to drink than gasoline. Contains vitamins. Unopened, makes a good paperweight. Can is recyclable.
Cons: Not recommended for children, pregnant women, or people sensitive to caffeine. You should drink water instead. Effects on my organs and sleeping patterns not yet determined, but are probably not good.

UPDATE (the morning after): I feel human. I'm not sure it had any effect on my sleeping patterns because I usually go to bed between 2 and 3 a.m. But I woke up easily and went to bed...maybe a little less easily. Something I did notice is that my parotid glands felt more inflamed than usual. (I know i should go to an ear, nose, and throat doctor about that problem, but it doesn't really affect my way of life that much so I pretty much ignore it except I couldn't ignore it last night, it was like INSANT REACTION to the Brawndo, holy shit).

OMG. That is AWESOME.

I wish people would say "I love you" every time I walk into Costco.

I bet you're still awake thanks to Brawndo.

wow, that sounds like some crazy ish! i love red bull though.

Sounds pretty awful. But then again I hate energy drinks. Come on Robyn give us something delicious, like macarons :) Please?

Luminous drinks are always... diconcerting. I think I imagine it entering your blood system as is, and making you glow like a biology model demonstrating the circulatory system. With radiation.
(I gotta quit being such a science geek)

Not that you ever really need energy drinks but the only one that actually tastes palatable is Bawls. Plus it comes in cool blue glass bottles (and adequate blue cans).

James: In the future, Costco will be the only place to get REAL LOVE.

Marvo: I STAY UP UNTIL 2 AM EVERY DAY BWAHHAHAHAA I fail.

Amy: If you love Red Bull I think you'd probably like this too.

G: Delicious is too easy; bright green liquids = a challenge!

SuperChomp: It'd be cool if my veins glowed. Kinda.

Carl: Maybe I will try that. If someone gives it to me for free.

On behalf of ROFLCon, we're sorry--we should really distribute warnings with that stuff =P I've never seen anything that lists Yellow #5 quite so high in the ingredients and, upon informing a Brawndo salesperson once that it stained skin, I received the response: "It stains your SOUL, man!"

Which definitely makes it the ideal beverage to complement our conference...but probably not your innards. On the other hand, it was great for pulling conference-organizing all-nighters! Long-term health effects what?

Christina: I ACCEPT YOUR APOLOGY!

..Didn't mean to knock ROFLCon or anything, hehe. It was lots of FUN! And I'm glad you gave me the chance to try Brawndo because otherwise I would just wonder, forever, AND EVER, what it tasted like. A part of me wishes I still had some..and then the other part of me is really glad that I poured the rest down the sink.

It totally stains your soul. True dat. My soul is now the color of a green apple Jolly Rancher.

The condoms are a nice touch. It's like ..an art piece.

You have successfully convinced me never to ever drink Brawndo. Thanks!

I wouldn't drink anything that sounded like it'd had it's can written on by an idiot.

The name weirds me out a bit as well.

Isn't Brawndo the same as all the other horrible energy drinks out there? Or is it worse?

moveable type won't let me search for your waffle entry, but i read it a couple weeks ago. DELICIOUS!!! i made them this morning and my husband said that they were the best recipe he's had and that i need to make them again (this was after his first bite). so the recipe is saved! thanks for sharing the waffle recipe, because we've tried others but the one you recommended is so much lighter. thanks again! :)

Graeme: Well the point is that it sounds like it was written by an idiot, although this marketing strategy doesn't go over so well if the customer doesn't understand that and actually things "YEAH ELECTROLYTES!!!@#!@"

Which people probably do think.

Jasmine: Probably the same, but in a funnier can.

Kristina: Yaay, I'm so glad you guys liked the waffles! My first bite was an "omg this is really good" experience too. :)

Hey Robyn, so many a moon ago, you posted this entry:
http://www.roboppy.net/food/2008/08/virginia_day_2_part_1_with_a_rock_slide.html

and I was wondering if in any way possible you'd be able to get better directions to where that place is, or put me in touch with someone that might know? Thanks!

You know, this doesn't sound all that different from the Scottish concoction IronBru...people drink it by the (giant) bottle up there. I guess that explains why nobody seems to have particularly great teeth. Or general health, for that matter.

Idiocracy was on last night. It is KIND of amusing, but as silly as the actors in it. The drink sounds awful, thanx for doing us all a solid.

Laura: I'd be interested in trying IronBru at least...once. ...Probably only once. :)

..yeah it needs more than that.