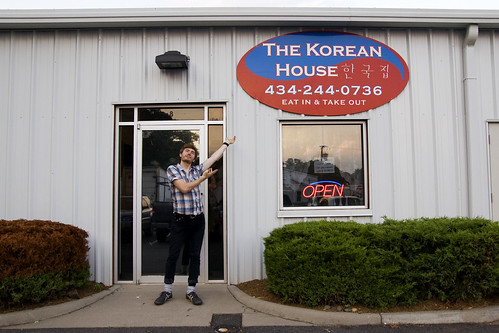 Few things excite Tristan as much as a trip to his favorite restaurant in Charlottesville, Korean House. Except maybe giving him a jar of kimchi.

When you first walk into the restaurant, it doesn't look like much: one giant, sparsely decorated room with an open kitchen featuring a small television in the corner playing Korean soap operas, partially furnished with orange chairs that look like they came from a high school cafeteria. But it's easy to like once the adorable Korean grandmother gently puts her loving hand on your shoulder, takes your order, and heaps food upon your table. ...Or maybe that's just me because familial love is so lacking in my life. 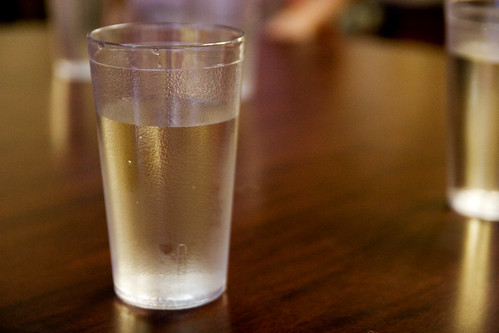 First there was the water. Or "water." It had just the faintest flavor of something grainy—corn tortillas, to be exact. And now I know there's such a thing as corn tea, or oksusu cha. It tastes alright—I'd add sugar to it if I were making it at home. 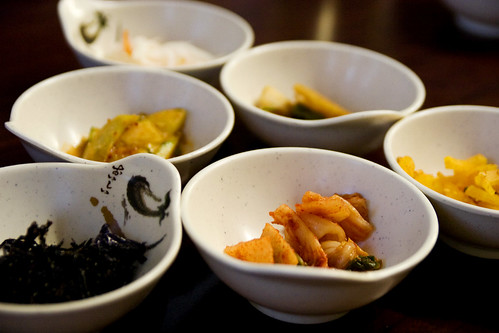 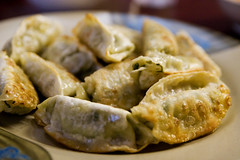 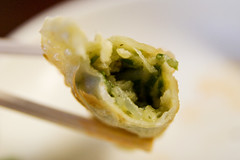 We shared a large order of vegetable mandoo (about 15 pieces it seems; the menu doesn't say). Light, crispy skins were filled with chopped greens and noodly bits. I'd happily eat a whole plate of these. 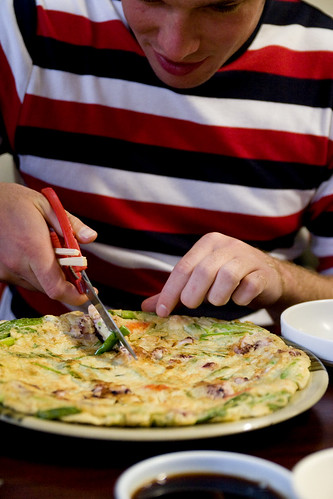 Ryan was the first to receive his entrée, the haemul (seafood) pajun with a side of...scissors? Every time I've eaten pajun it had come precut, but here you could cut out the portion you wanted. The pajun wasn't bad—it was chock full of seafood and scallion goodness—but not one of my favorites either; I like them a bit crispy on the outside while this one was mostly soft. 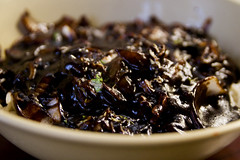 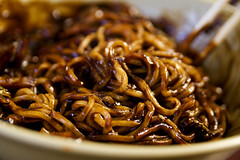 I ordered the jajangmyun , an originally Chinese dish (not that I've ever had the Chinese version) of thick wheat noodles mixed with a viscous black soybean paste-based sauce (that will probably get all over your mouth as you suck up the noodles) and chunks of onion and pork. The sauce had a mild flavor—a little sweet and savory, not strongly one or the other. It tasted good, but not so good that I'd want to finish the tub-like bowl that must've held at least four servings. 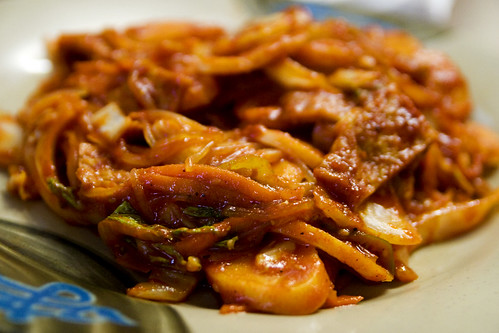 Tristan's favorite dish, ssal dukbokki, consisted of sliced rice cakes, shredded carrot, onion, fish cake, cabbage, and bean noodles smothered in hot pepper sauce. I liked its mix of textures, mostly the springy chewiness of the rice cakes. It also benefits from coming in a small and large size—if you have a normal-sized stomach, get the small.

I didn't take a photo of everyone's dish—it gets annoying after a while—but everyone enjoyed their food, even if that didn't always mean finishing the huge portions. My favorite un-photographed dish was Lihan's Korean ramyun, a cold noodle soup with very thin bean noodles in a spicy horseradish-flavored broth. 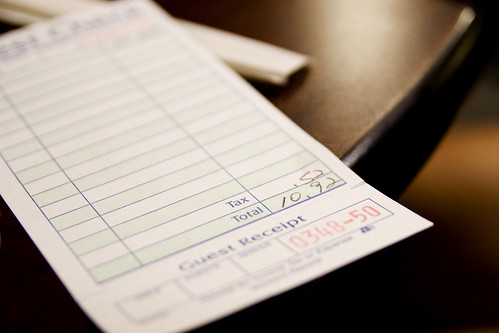 The meal ended with an unprecedented event: each of us was given our own check. We didn't even ask for them to split it; they just knew. It was a nice rest for my mathematically challenged brain. And I'm sure it'll never happen so easily again. 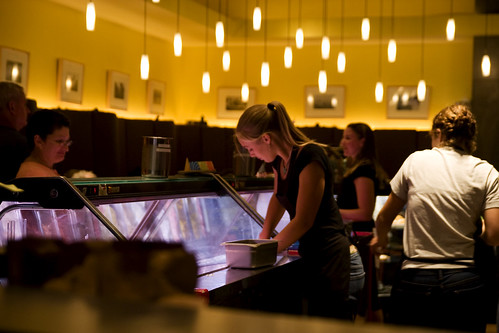 At my insistence, we went to Splendora's Gelato Cafe for dessert. The shop had a line out the door, although it was no more crowded than the rest of the Downtown Mall on that late Friday night. People...everywhere... 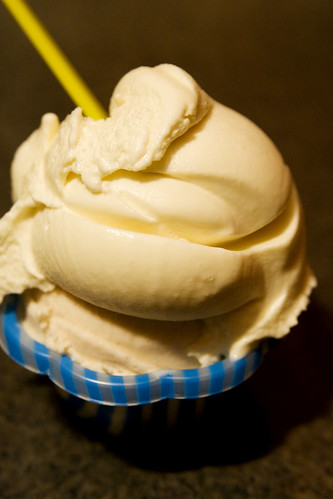 I tried samples of pistachio, hazelnut, and a few other flavors while trying to figure out what I wanted. Unfortunately, the pistachio tasted more of almond and the hazelnut wasn't anything special. When I reached the end of the gelato case, I impulsively went with cinnamon and pineapple. The cinnamon was surprisingly good—not too sweet with just enough flavor, except near the end of the scoop when the flavor kind of died out—but the pineapple was too sweet and reminded me of pineapple-flavored candy. Its texture was also airy compared to the cinnamon's, not something I want in gelato. 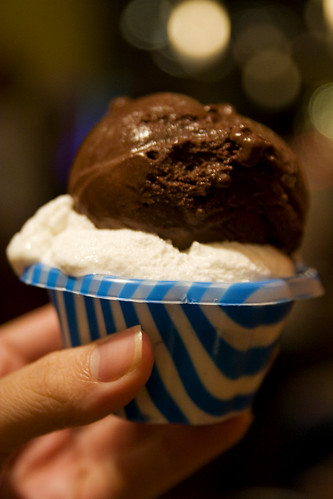 Lee Anne had more success with her cup of chocolate and lemon. Neither flavor was too sweet, although I would've liked the lemon more if it had been more tart instead of bitter.

Splendora's seemed hit or miss—nut flavored gelatos were pretty "meh," and the sorbets weren't bad—although I couldn't known for sure unless I tried every flavor. ...Don't think I wouldn't want to.

I just came back from a feast of homemade Shanghainese food, but now I am craving rice cakes!

Bitter lemon? That's not yummy:( But from personal experience...get ice cream in Virginia:) Gelato...not so yummy there...

OOooo yummy korean eats!! My favorite korean dish is either dolsot bibimbap/dukbokki!! By the way, is Tristan a vegan/vegetarian?

I love Korean food, but sometimes, the servings are too big. (At least, where I live.)

I haven't had a decent pistachio gelato yet (it seems to be your Holy Grail of creamy desserts), though I have discovered HAZELNUT BOO-YEAH HOO-HAH gelato that's just, well, holy crap give me some of that in gallons like NOW.

The beverage you had was probably boricha, which is barley tea. I guess because I grew up drinking it I've never thought about sweetening it. Which is strange I kind of put an obscene amount of sugar in regular American iced tea...

Umhaha! Robyn,as a Korean, I'm glad that you enjoyed Korean food this time.

Yeah, I agree. Banchan is awesome.
Who wouldn't want endless refil? Not that we will want more than 3-4 times. But for banchan, that's how it works in Korea. They do that. They are nice.

It's too bad that I can't find any good Korean restaurants from where I live (Ottawa, Canada). We don't seem to have enough Koreans to create the market.

If you like mandoos, you should try another type. There is steamed version, too. The skin is more on the bready side than crispy and thin. But you can find king-sized (size of newborn baby's head)one and it's good for a meal!

I agree with Jennifer, it was most likely barley tea.

Kate: Next time, I shall get ice cream!

Cecilia: Yup, he's vegetarian! Or vegan more like. 99% of the time.

Jennifer and Nick: I would've thought it was barley tea if it didn't taste like ...corn? Hehe. I mean, I've had barley tea a few times before. I should probably try making corn tea too though...

Bangsil: I WANT TO GO TO KOREAAA!! Too bad about the lack of Korean restaurants in your area. :( I've had steamed dumplings before from a mandoo place over here and YEAAH those were awesome. But I didn't have a king-sized one!

Whoever makes those clear cups with color stripes on them... they're making a killing just selling to gelato places! I see 'em everywhere.

And those rice cakes look yummy. If they came with some pork, I bet it would be even better. :P

I'm still learning about Korean food, but that looks gooooooood.... (The first time I had chajeungmyun or whatever however it's spelled was at a Korean place. So a while later I saw it on the menu at a - I think Shanghainese restaurant - I ordered it and it came and it was so spicy I cried and cried.)

I think the Chinese version of jajangmyun is waaaaay better. The Korean version just seemed highly understated. We should totally hunt some for you!

Robyn, reading your blog makes me realize how devoid my life is of gelato. I usually opt for ice cream or Pinkberry, but your pictures seem to be sending subliminal messages to my tastebuds.

Danny: Haha, yeah, I wonder why those are the standard gelato cups? They're cute.

Yvo: Ooh, I wish it had been spicy!

Marie: Oh nooes, gelato is so much better than Pinkberry! ..and usually better than ice cream. But not always.

Matt: Oo, I gotta find this out for myself.

I'm glad to see you aren't starving to death. I miss you a lot. When are you coming to Philadelphia to visit me/when can I come visit you?

I've been gorging myself on LGO goodness and the occasional Bianco expedition. He made Charlie and me a special pizza that was pretty brilliant. But somehow, eating just isn't as fun without you.

i'm not sure why everyone is insisting you had barley tea, it might have very well been corn tea. every restaurant/house makes their preference. i believe you robyn! i like oksusu cha a lot, but my mom always made a variation of oksusu and green tea, cuz she thought it had more nutritional value that way. as for putting sugar in it, ummmm, sorry, but i just think that is wrong!!!!

Oksusu tea is definitely roasted corn tea. Most Korean restaurant serve roasted barley tea, but some serve the corn version. I like the corn tea better because it is a tad sweeter than the barley tea.

I wouldn't call myself a vegetarian, but I don't eat meat. For eons I've always wondered what I would order in Korean restaurants, seeing that many of them in my town advertise their "BBQ" meat.
Now at least I'll look out for the seafood pajun and ssal dukbokki. Thanks!

Caroline: This is the first time I had corn tea! I dunno if I like it more than barley tea...I like both. :)

Norlinda: I think there are lots of seafoody Korean options, so you should be ok. You must try pajun..so gooood.

the scissors & split bill is an amazing idea!! :)

Oh hey, maybe Tristan woold like my mom's new favorite breakfast. She told me for the first time the other day: normal oatmeal made in a loaf pan with a bit of sea salt and allowed to set firm overnight, then sliced the next morning and heated in a frying pan and topped with kimchi! She swears it's great!?!

Elarael: Oatmeal topped with kimchi?! I'd try that up to the kimchi part...hehe.. :P

to clear up any confusion, i am most certainly vegan! it is becoming an important part of my identity for multiple reasons. i had difficulty keeping vegan in virginia but staying vegetarian was a breeze. glad to be back in nyc for that very reason.

the tea at korean house was def not boricha. boricha is one of my favorite things to consume, and i brew it at home every few days. i guess it was the corn tea, though i had never had it before! korean house always served boricha before...

elarael: that sounds awesome. i'm going to buy some oatmeal at work tomorrow and give this a try.

yeah for white boys obsessed with kim chee!! mine won't touch it...but that's okay! he uses fish sauce in his cooking...i'll live with that.