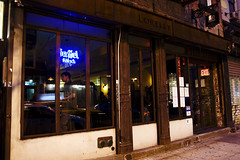 When I eat out with friends, food tends to fall into one of three categories: Asian, American, or pizza. It's easy to say that "German" never pops up, aside from a birthday dinner I held about three years ago at Lederhosen (and looking back, I don't know why I chose that restaurant—not that there's anything wrong with it, it's just random). That's three years without German food. Three years! And you know what I was missing out on all this time? Fried pork cutlets, french fries, and fresh pretzels. Why I would deny myself of such a deliciously nutrient-deficient meal for so long is a mystery to me.

At the suggestion of Jeanne's friend Stanley, six of us—including Jeanne's friends Gary, Grace, and Stephanie—went to German restaurant and biergarten Loreley two Thursdays ago. We started with a basket of fresh, warm pretzels studded with salt chunks and accompanied by brain-tingling mustard. I wouldn't want to eat any other kind of pretzel unless they also possessed just the slightest crispy crust encasing light, fluffy, bready innards. The only bad thing about these pretzels is that they had a short lifespan of awesomeness: as they cooled down, their tasty pretzel-powers disappeared. Then again, you should have no problem finishing these off before they dip far below peak-deliciousness. Another view...because you're worth it

Wiener schnitzel is like a thinner version of pork katsu with lighter breading. (I know the schnitzel came before katsu in the history of fried meat cutlets—and what a glorious history that is—but as I eat a hell of a lot more katsu, I'm comparing it to that.) I prefer katsu—its thicker cut retains more juiciness and is probably more tender—but I'm not going to turn down a schnitzel. That'd be stupid.

The thinness made it deceptively easy to eat at first: "Hey, it's so thin, I could eat this all day!" Of course, about halfway through stuffing the cutlet down my throat (interspersed with handfuls of fries), my belly felt like it was leaden with a compressed ball of pork and potato matter. Which is was. Ignoring the cries of my body, I ate through the pain and finished off most of my plate. How? Why? I do not know. Missing brain cells, most likely. Jeanne ordered the same thing and only ate half of her plate. That was the smart thing to do. Yes.

Those fries were tasty though—golden crisp crust, fluffy starchy innards. I guess if I had had ketchup to eat them with, I would've eaten all of them, which would've been bad. I ended up burping fried potato fumes all night. There are worse things to burp, but it definitely gets unpleasant after a while. If it offsets the meat and potatoes at all, the schnitzel comes with a non-sucky side salad. It's more like salad ingredients put together in a bowl unmixed—lettuce, cucumber slices, shredded carrot, shredded red cabbage, and tomato wedges—topped with an Italian dressing-like dressing. Yay, fiber! 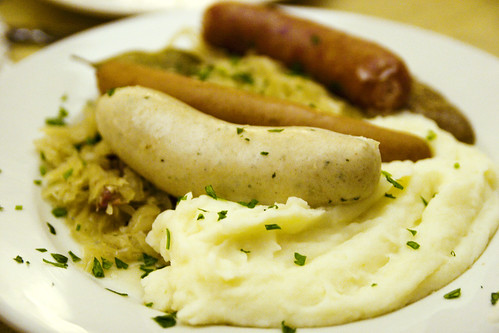 One of the guys (names escape me; I suck) ordered the bratwurst with sauerkraut and mashed potatoes platter. Mm, more meat and potatoes. I'd like to try this next time. Grace and Stephanie went with the schnitzel sandwich, a wiener schnitzel in a bun topped with lettuce, tomato, and mayonnaise. I probably should've went with that...if I knew what "moderation" was.

I was too full to get dessert (I'd like to believe there's a separate stomach for dessert, but sometimes my "normal food" spills over into that partition of my digestive system); otherwise I would've gone for a slice of black forest cake. Next time, perhaps.

Wiener Snitzel! Now you are talking. Moderation is good but how can you ever resist such goodness. I once devoured an entire plate of German-roasted pork knuckle. It wasn't my fault. It just tasted too damn awesome to be left alone. I'll pass dessert anytime if they have that kick ass awesome crispy crackling roasted pork knuckle. And I can only OD on pork if it is the German-version.

I only ate half because then I went to Pinisi and ate a slice & a half of cake by myself. YES I DID. I went back to Pinisi twice more before I left NY, and I lovingly carried an entire carrot cake home with me. I shared it, but it was one of the hardest things I've ever done in my life. ;D I agree with you about katsu vs. schnitzel, and I also enjoy the crunchiness of panko more than bread crumbs too. But Loreley was pretty damn good anyway. Thanks for meeting up with us!

I LOVE Loreley. They were really accommodating of a large crowd for my husband's birthday last summer, too--so rare. If you ever go back, you've got to try the spaetzle with cheese and bacon. Oh, and invite me. ;)

Schnitzel! I can't think of it without remembering the schnitzel song from Hoodwinked!

I've never had it. I guess the closest I've come is when my mom makes breaded pork cutlets. And chicken parmesan.

I haven't had German pig knuckle before! Obviously, that needs to go on "the list of things to eat asap."

Jeanne: Oh, dessert goes into another stomach; that's no problem. Can't believe you carried a whole cake home though. You deserve a gold star for such dedication (although I suppose the cake was reward enough!) I'm always up for more fooding whenever you come back!

deb: Hell yeah! You can totally come to my next GERMAN FOOD GORGING PARTY!!

Christina: Holy crap, that was a weird / amusing cartoon. Those kids! They're like...reincarnated versions of Satan...

Just a little information. A real wiener schnitzel will never be made of pork. It has to be made from veal. Otherwise it is just a schnitzel (which is tasty in in's own right...).
And...there is no "german" cuisine (it's like saying there is an asian cuisine...). There are different dishes in different regions. And Wien (as in vienna) is in Austria :) So if you really want to get to know regional style cooking in Germany and/or Austria - I fear you will have t cross the ocean ;)
I never met a fellow German who would eat mustard with Bretzeln... Yikes.

Mm, I like that place! I know you are not a beer drinker, but did none of your table mates have some? Oh, man, the only thing that tops Brezeln and Senf is adding in Bier! Hott Dogg!

sonja: Ahh, I wasn't sure about the pork/veal thing...Loreley just lost a bunch of points, didn't it? :( Thanks for the info! I didn't know there wasn't German food (although Asia is kinda...a whole continent; maybe it's more like saying there isn't one kind of Chinese food because it differs depending on the region?) I would love to try food in Germany someday, although so far I don't have much of an impetus to go (don't have friends or family who live there) compared to other places. Someday, hopefully...

I guess the mustard thing is American! Ahh crap. What do German people eat with pretzels (if anything)?

Jones: I think one or two other people had beer, haha. We're not heavy drinkers! Oh, I tried three Chilean beers today, if that gets me any props. Unfortunately, I didn't like any of em. BUT I ...I TRIED A FEW SIPS!!! ;_;

Hi Robyn,
(first time commenter, by the way: I love your blog - totally mouthwatering pictures, really makes me want to visit New York one day soon!)
as a German living in Munich I'll enlight you about Brezeln: If eaten for breakfast or as a snack, most people eat them with lots and lots of BUTTER. Yum-my! However, Brezeln are only really eaten in southern Germany - so you shouldn't ever buy one if you're in Hamburg or Berlin - they'll likely be stale and awful. A very typical Munich / Bavarian dish are Weisswürste ("white sausages", steamed veal sausages, eaten without skin) which have to be eaten with sweet mustard and a Brezel. And you have to drink a Hefeweizen with it!
My university cafeteria offers the combo for lunch every Friday - apparently, visiting foreign scientists are regularly freaked out by the whole Germany faculty and most students happily drinking beer on a workday at 11 am :-)

Rosa: Thanks for the info (and for de-lurking), that helps a lot! MY KNOWLEDGE OF GERMAN FOOD, IT GROWS!!

Next time, I'm getting sausages!

I once had sandwiches at a place in Pennsylvania that used big fat pretzels as the sandwich-buns. I COULD HAVE EXPIRED FROM PURE PLEASURE AT THAT POINT.

That schnitzel and pile of fries looks glorious! I need to find a German restaurant nearby. My last cutlet intake was a chicken one at a Somalian restaurant, which (with accompanying rice and dish of hot peppersauce) was so tasty that I *dream* about it.

And I've never even heard of a Somalian restaurant. That is another thing that I want. To eat. At.