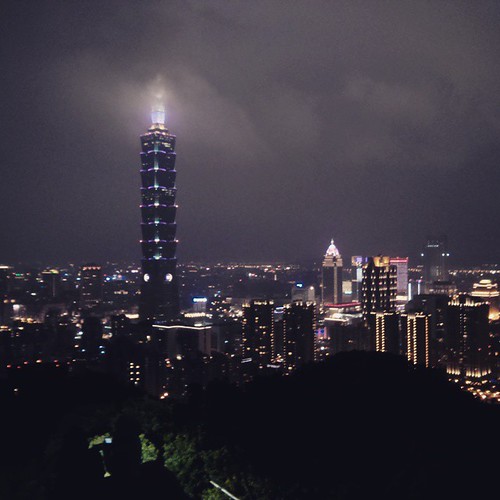 The view of Taipei 101 from Xiangshan.

Last Monday night, as soon as I stepped off the airplane into the jetway at JFK Airport, a cloud of pressure swelled behind my eyes, driblets of despair juice threatening to spill out. It's over. You don't live in Taipei anymore. Sorry, America. I don't step foot on your soil for over nine months—the longest I've ever spared you of my presence—and this is the loving embrace you get.

I also felt like crying just after I boarded the plane in Taipei 16 hours earlier. And before then, while waiting in the security checkpoint line at the airport. And before then, when I was alone in my apartment, luggages fully packed to the point of hm-these-might-explode-on-the-plane-well-that's-a-risk-I'm-willing-to-take, with me sitting at the edge of the living room couch (green, fairly cushiony, standard IKEA) while staring blankly at the opposite wall (beige, flat, standard wall). I still had an hour before I had to leave for the airport, but I may as well have left then and there—the minutes drained away like seconds. All of that happened just in the afternoon before my flight back to the US. I won't delve into the week leading up to that flight. There was a good amount of stifled weepage, plus some real tears, most of which I sloppily wiped onto the clavicular region of my friends' shirts. 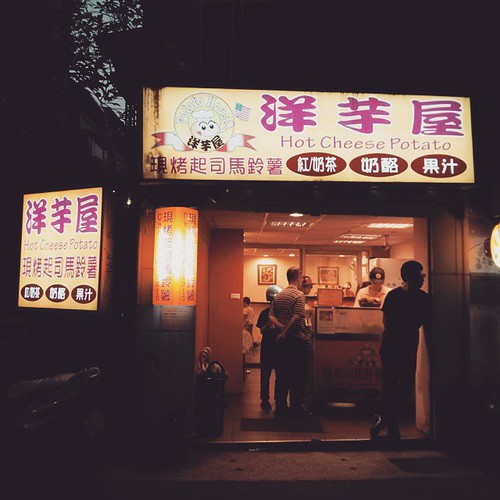 Like any warm-blooded mammal, I also miss living near a restaurant called Hot Cheese Potato.

What made leaving Taipei so much more painful than other places I've lived? I've missed plenty of people before; I've missed cities; I've missed schools. But I've never missed all three so intensely at the same time. And I don't mean to crap on my other friends, nor other cities I've lived in, nor other schools I've attended. The circumstances of my living in Taipei make it nearly impossible for anything else to match up to it. After seven years of of working at Serious Eats, I moved to Taipei to study Chinese, but it was more like a nine-month vacation during which I happened to be studying Chinese. I wasn't doing it for college credit, nor for future job prospects. I was just doing it for self-improvement, fueled by little more than self-imposed guilt for being yet another American with Taiwanese parents who couldn't speak nor read even a tenth-smidge of Chinese. I didn't have to work, and living in my dad's apartment meant I didn't have to pay rent. It was the closest experience I've had to living a dream, and very much like a dream I didn't know it was a dream until it was over. 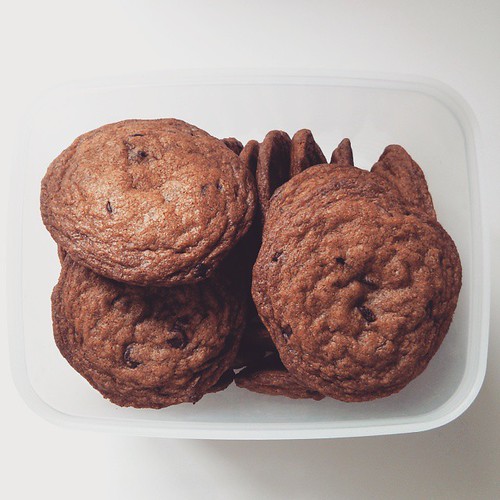 Homemade chocolate chip cookies, to put you in the right frame of mind. Thanks to my cookie-making buddies Ying-Le and Charlotte.

Words cannot do justice to the awesome people I met in Taiwan. ...I...I really don't know where to begin. But here's my fruitless attempt. Imagine your favorite baked good—chocolate chip cookies, if you're me. You have an endless mountain of these cookies, fresh-out-of-the-oven, golden brown with soft, slightly chewy centers and crisp edges. The air is saturated with butter, sugar, and chocolate. You get to eat these cookies whenever you want, as well as perpetually breathe a cloud of sweet butter, without ever getting tired of them. Imagine the joy. Maybe a bit too much joy. You might get sick. It's a lot of cookies. Also, butter cloud. But whatever. I'm not a pro at translating cookies to human emotions, but that might be an approximation of what it felt like hanging out with my friends in Taiwan, as well as well as being greeted by the friendliest of shopkeepers at my favorite establishments. I didn't know what it felt like to be a regular until I lived in Taipei. 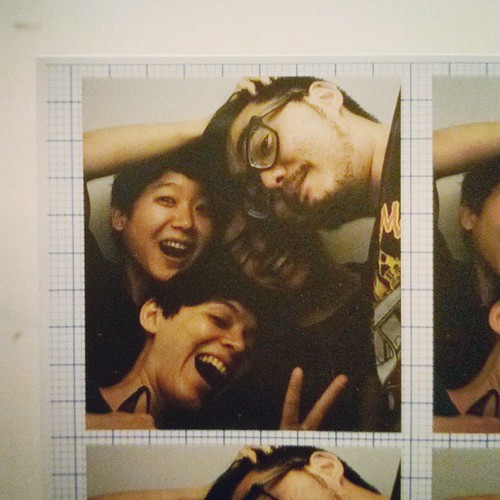 Before boarding a train to Hualien, my friends Charlotte, Hsupeng, and Xiangtai and I shoved into one of those one-person ID photobooths to abuse its power.

I definitely do not deserve to have made as many amazing friends as I did—friends who are far too generous, and funny, and weird, and silly, and sweet, and helpful, and caring. All of whom, thanks to modern technology, I can continue to virtually prod through LINE anytime I want. (Although I've only tried a handful of messaging apps, I do believe LINE is the best because it has the best stickers. Seriously. BASK IN THE GLORY, THEN DIE. Anyway, if you move to Taiwan, you have to use LINE. Seemingly 99% of the population uses it.) One of the best gifts a friend can give me is the gift of "making me feel totally comfortable being myself," which my friends in Taiwan were super good at. Sometimes this meant merely sitting together and doing nothing—sometimes that's all friends need. Their existence emphasized how lucky I am and showed me how to be a better person, influence I hope to exercise before my brain inevitably devolves into dry, feta-like crumbles (is that a thing brains do, I don't know). 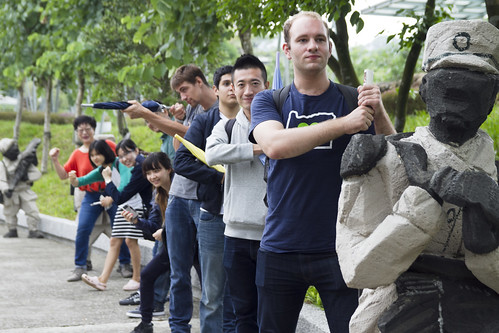 My first-quarter teacher and students from her two classes. We went on a field trip together to Juming Museum. Everyone is painfully adorable.

I wouldn't have met most of those people if not for my school, the Mandarin Training Center at Shida. When classes only have eight students at most, the quality of your teacher and classmates makes a huge impact on your will to continue studying Chinese when you constantly find yourself internally muttering, "Seriously, what...the...the fuck is this?" over and over again while practicing writing characters until your head flops into your textbook-cum-pillow. Thankfully, over my three quarters at the MTC I learned from three awesome teachers alongside the most fun, welcoming, and diverse bunch of classmates I could hope for. 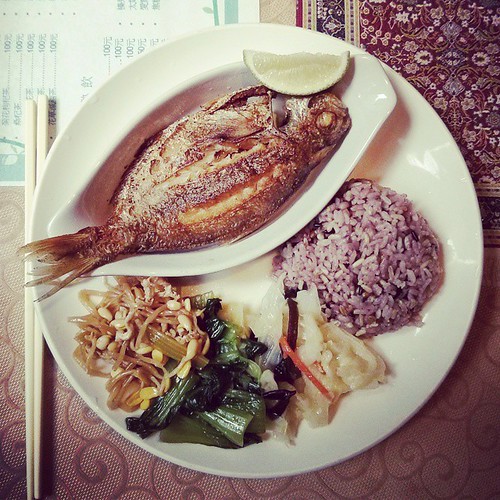 One of my favorite lunches: pan fried butterfish. This plate plus a bowl of soup comes to a grand total of NT$100 (about US$3.25).

As for Taipei itself, I think it may have ruined me for living in any other city. Sure, summer feels like you've been condemned to live in a sweaty toaster, the architecture sometimes inspires wails of, "BUT WHYYYY, WHY WOULD ANYONE BUILD THAT", the pollution might be giving rise to a lung cancer-ridden population, and you'll dream of a army of electric scooters to replace the inescapable din of their gas-powered elders, but I grew to love it. I miss the tiled apartment buildings that look like they're covered in bathroom. I miss the narrow, sidewalk-less alleys where pedestrians, cars, bikes, and scooters converge to ideally not maim each other. I miss cheap biandang lunches. I miss 7-Eleven and Family Mart, especially when they're right next to each other. I miss Matsusei's two-for-one NT$30 soft serve. I miss cute neighborhood parks. I miss the Slide of Death by Yong Fu Bridge (I'll show you a photo of it someday). I miss coffeeshop cats. I miss the night view of Taipei 101 from Xiangshan. I miss local pineapples whose cores taste as ripe and sweet as the rest of the fruit. I miss excessive souvenir stamps at every tourist attraction.

There's a lot to miss. I'll try to tell you all about it in a series of subsequent posts I failed to write over the last nine months. [I have many good LINE stickers that could go here, but for now you'll have to insert an emoticon of shame from your own imagination.]

I can't promise you'll have as good of an experience as I did if you move to Taipei to study Chinese. I met the right people at the right time through some serendipitous circumstances, and I have a family network in Taipei that's willing to help me. Looking Taiwanese was also beneficial (although I did often get mistaken for a Japanese tourist because my Chinese is shitty). But if Taipei suits you, you could have a magical time living there.