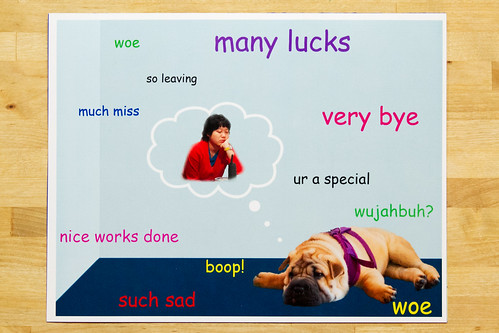 Doge-inspired good-bye card, made by Niki. My tears, how they flow. ;_;

Late last Friday at the Serious Eats office, I gathered up all my remaining personal belongings—books and pictures, mostly—and left my set of office keys on my desk before heading home. While waiting for the subway, I realized, "Oh crap, I forgot my leftover pasta in the fridge. The pasta I wanted to eat for lunch tomorrow." On any other day I could've walked back to the office for the pasta, but for the first time in seven years, I couldn't go back. No one else was in the office, and the door was locked. The forsaken pasta bummed me out (it was from Osteria Morini—you'd be bummed, too), but more saddening was accepting that the office was no longer my home away from home.

I've spent the last week trying to figure out how to do justice to my seven-year tenure at Serious Eats using the power of the keyboard-tapped word. (I wrote a bit about it in last week's This Week at Serious Eats World Headquarters, and Ed wrote me a farewell post last Monday. I'm really pulling up the rear now.) But after many stretches of staring blankly at my laptop screen alternated with staring blankly out my bedroom window, underscored by my internal soundtrack of a drawn-out "bbbbbbeeeeeeeeeuuhhhhhh" (imagine Hypnotoad with roiling indigestion), I've decided there's no way I can do it justice. Somewhere deep in my brain meats is a pile of useful words getting flaccid and crusty in their stagnancy, like a sloppily stacked, ever-growing tower of forgotten luncheon meat. ...So now that I've accepted that, I can write this overdue post.

[Stands up with fists in the air] YEAH, MORE IS BETTER!

But it's hard to leave Serious Eats. Because they chained me to my desk and drugged my food for years it's a unique company staffed with some of the most hardworking, smart, quirky, and fun people you'll ever meet, and as a trusted member of the Serious Eats staff, you kind of have the creative freedom to do whatever you want. I've heard about jobs in the "real world"—from the acceptable to the soul-crushing—and I know I've had it good these last seven years. I suspect most jobs don't involve meaningful friendships with coworkers, contributors, and interns, and eating shittons of good food.

I'm not sure I've ever explained how I got my job at Serious Eats in the first place. It was unfairly easy. Back in late 2006, I wrote a post on this blog asking if anyone could help me find an internship to fulfill a school requirement. Adam Kuban, one of my first food blog-related friends, reached out to me about interning at a new website he was working at with Ed Levine, Alaina Brown, and Meg Hourihan, some of the most influential food bloggers of the time. With Adam's help, I became the live site's first intern (Serious Eats had interns before the site launched), and after a semester of working there, they deemed me worthy of hiring full time. It was a prime case of being in the right place at the right time.

Today, Serious Eats is considerably more serious about how it hires interns (rightfully so, as the site has grown so much and upped its quality standards since I started). They receive a wealth of applications from passionate, smart students, a disproportionate percentage of whom seem to be from Ivy League schools. If I applied today as the college senior I was in 2006, I'm not sure I'd be accepted. If I applied for a job at Serious Eats now, I doubt I'd get it.

So thank god my mom popped me out in 1985, perfectly positioning me to get a job doing something I enjoy at what would've otherwise been a directionless point in my life. 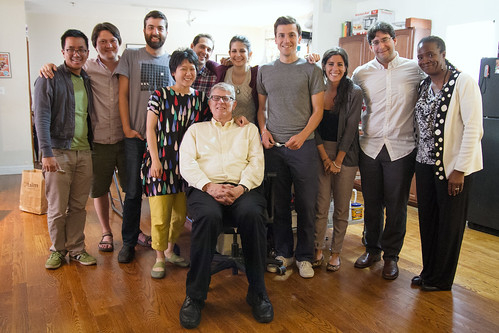 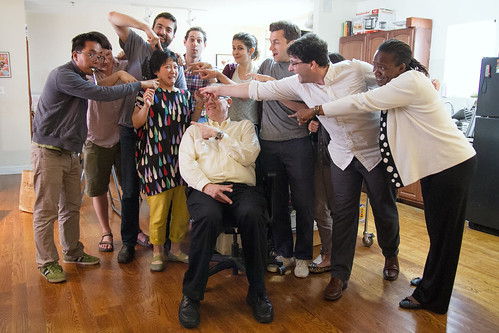 Group photos from my last day. Not the whole SE crew, but most of it! From left to right: Leang, Kenji, Rabi, me, Daniel, Ed, Niki, Paul, Leandra, Max, and Denise.

Although I enjoyed most of the work I did at Serious Eats (along with the free food and 10 a.m. start to the workday and location in Chinatown), it's the people that most made me want to stay. People who want to work and intern at Serious Eats tend to be awesome. I guess that shouldn't be surprising—the tone of Serious Eats is inclusive, friendly, fun, and smart, characteristics found in all of the staff members, past and present, whether they're in ad sales or web development or editorial. I'm honored to say I was a part of that group.

And even though everyone in the group deserves recognition, I want to focus on Adam and Ed. Adam for reaching out to me back in 2005 when this food blog was a drooling infant, for giving me all kinds of advice, for getting my foot in the door at Serious Eats, and for being one of my biggest cheerleaders the whole time I've known him. Ed for taking me on as a shy intern, trusting me with his baby, Serious Eats, over all these years, for also being one of my biggest cheerleaders, and for having more confidence in me than I have in myself, which will hopefully push me in the right direction once I fully accept his confidence. I owe them something like a million thanks. 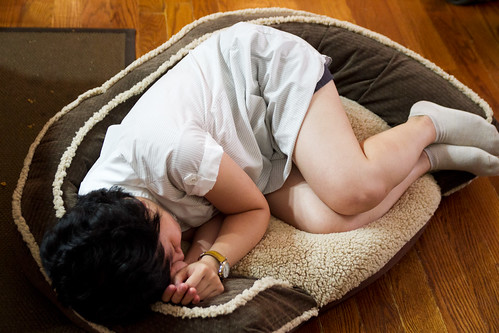 I sleep with dignity.

What am I doing now that I'm unemployed? First, the most boring thing: catching up on sleep. God, I love sleep so much. Sleep is master of all that is good and joyful and don'ttakesleepawayfrommeoriwillcutyou maybe I love it too much.

Second, meeting up with as many friends as I can. Some of whom I haven't seen in years. My bad. :(

Third, working on some personal projects. I don't have a portfolio—I should probably do something about that. More importantly, I should also update this blog more than once a month. At least, after I edit the truckload of photos languishing in raw format on my hard drive. Yeeeaaah. 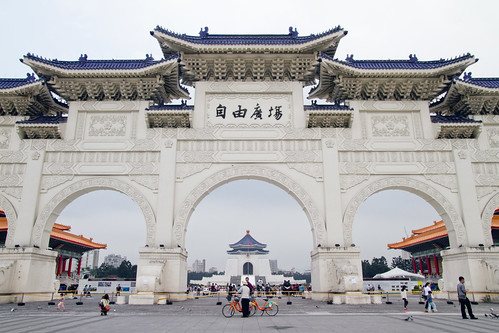 And fourth, preparing ever so slowly to move out of New York City at the end of July and haul myself to Taipei in mid-August to learn Mandarin at MTC in National Taiwan Normal University. Yes, I've finally given in to the deep shame of not knowing my parents' mother tongue, and I'm moving to my parents' motherland to learn it. If all goes well, I'll spend nine months in the program and return to the US with better-than-feeble Mandarin skills. If you live in Taipei and want to hang out, oh god, please let me know. If you want to visit Taipei between September and May, please let me know—maybe you can crash in my apartment!

What's going to happen after I'm done with the MTC program in Taipei? ...I'm still figuring that out. I guess I'm still staving off real life. You'll just have to continue reading this blog to see the success/failure/horror/indigestion unfold. Thank you, as always, for sticking around.