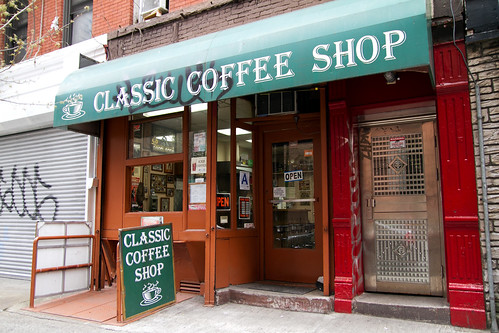 Some people think I must keep up with the latest food trends and restaurant openings in New York City because I work at a a food website. To that, I say, for the most part, not really—I'd rather watch this video of a baby alpaca falling asleep on a continuous loop (a truly inspiring combination of music and film, that is). I'm not saying I don't care about anything that's new—I care if it's awesome—but I'm more interested in places that have stayed in business for years upon years/decades without the help of any Internet buzz.

Like Classic Coffee Shop. This cozy, sandwich-centric lunch counter on Hester Street has been open for 37 years. It's a 10-minute walk from my office. And I only ate there for the first time three months ago. I fail. 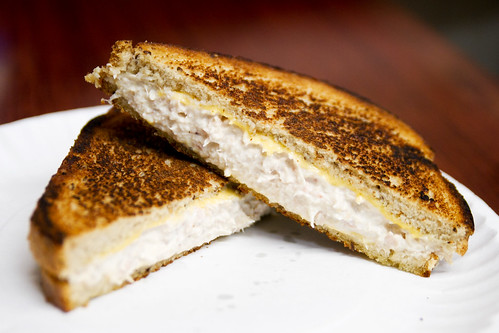 Lately I've been eating tuna melts every chance I get, and Classic Coffee Shop's ($5.50) is my favorite so far. Instead of the mountainous open-face sandwiches I'm more accustomed to, this place keeps it simple: a closed sandwich made with well buttered slices of rye griddled to an even dark brown, two slices of melted cheese, and a reasonable amount of creamy tuna salad. You've got crisp, gooey, and creamy in every bite—no fork and knife required and no excess tuna splodging out the back. 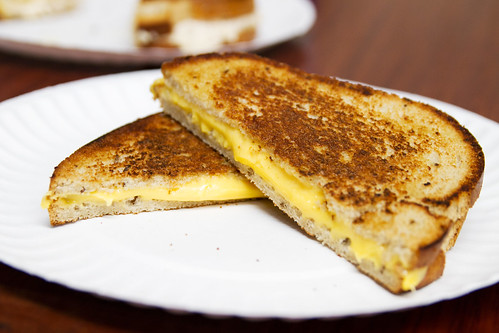 Or if you're not into tuna, go with a good ol' gooey grilled cheese sandwich ($4). 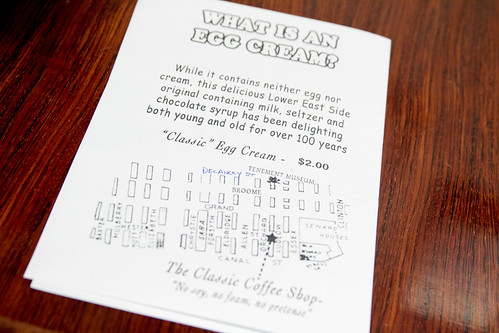 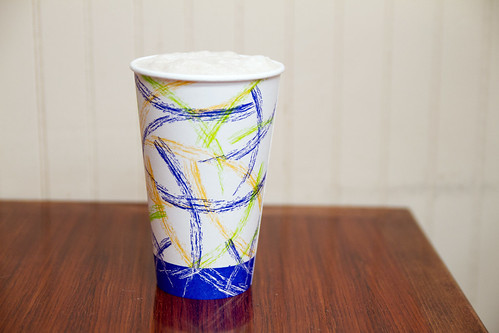 Whatever sandwich you choose, wash it down with an egg cream ($2), one of Classic Coffee Shop's specialties. Don't take the name of this classic New York drink literally; it doesn't contain any egg, nor is it all that creamy. It's made by mixing together chocolate syrup, milk, and seltzer—think frothy, slightly carbonated chocolate milk. 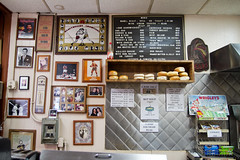 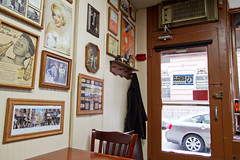 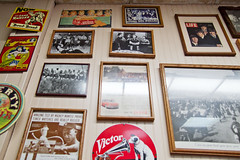 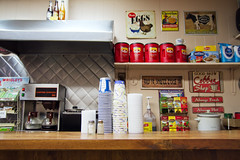 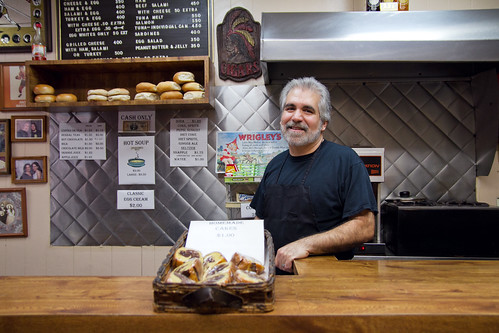 Lots of flair; owner Carmine Morales behind the counter.

If the sandwiches and egg creams aren't enough to make you fall in love with this place, then maybe the decor will do it for ya—a mix of retro ads, family photos, magazine covers, and more, displayed in a sort of neatly jumbled way.

As for their coffee...I don't drink coffee, so I can't tell you how it is.

What About All Those Other Tuna Melts?

Because I'd hate to feel like all my other cheese-topped tuna salad eating was for nothing, here's a quick rundown of all the other tuna melts I've eaten so far this year. Keep in mind that I'm not a tuna melt expert by any means—it just happens that I've eaten more tuna melts this year than all previous years combined. And if a restaurant doesn't make a great tuna melt, that doesn't mean they don't have other good dishes. 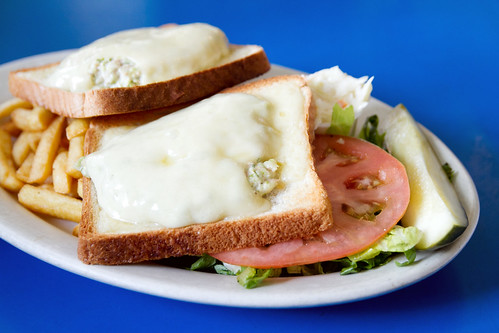 Landmark Dinner: I guess it tasted fine, but I wouldn't eat it again. The tuna salad-to-bread ratio was a bit wimpy on the tuna salad side. Then again, the tuna salad was kind of bland and not all that tuna-heavy, so maybe I wouldn't have wanted more of it anyway. 158 Grand Street, New York, NY 10013 (map); 212-334-0040; landmarkdinernyc.com‎ 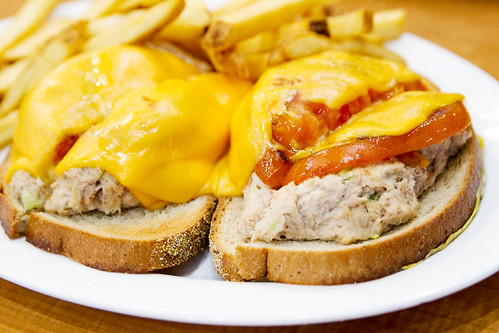 Mansion Restaurant: These open-face sandwiches were massive—this dish could feed two people. I particularly liked the tuna salad. Nicely toasted bread and lots of gooey cheese = win. I ate the whole thing and felt absolutely disgusting after, but I'd do it again. 1634 York Avenue, New York, NY 10028 (map); 212-535-8888; mansionrestaurantnewyork.com‎ 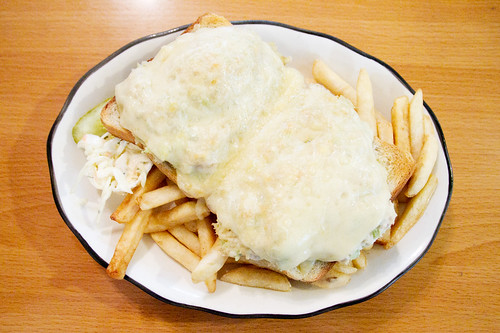 Everest Diner: This tuna melt was possibly more massive than the one at Mansion, but it wasn't nearly as good. I didn't like the tuna salad as much, and although there was a buttload of cheese of cheese, it didn't meld as well with the tuna. 22 Chatham Square, New York, NY 10038 (map); 212-406-3653 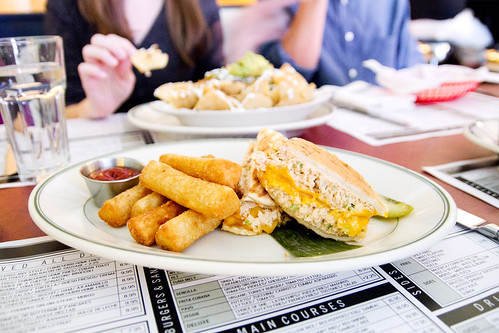 Coppelia: This tuna melt could've been so good...if not for the horrible bread. The bread just killed it. Instead of your good ol' standard rye, they used what tasted like smashed potato rolls. It looks like they were given some sort of half-hearted grilling, but there was no toasty crispness to speak of. The bread was soft and compressed-bread-gummy all the way. I liked the tuna salad and cheese, but I couldn't stop thinking about that stupid bread. 207 West 14th Street, New York, NY 10011 (map); 212-858-5001; ybandco.com‎ 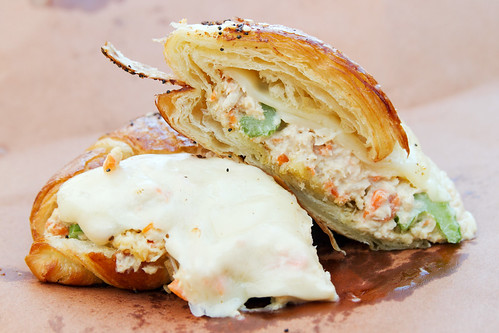 Tuna melt from Scharf and Zoyer.

Scharf and Zoyer: A fun variation on a tuna melt topped with crushed potato chips and Swiss on an "everything" croissant. It could've used more potato chip action, but otherwise, good stuff. facebook.com/ScharfandZoyer 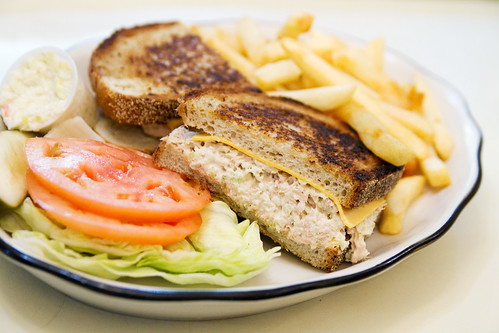 Joe Junior: Joe Junior may be great for burgers, but their tuna melts need some work. It's the first time I've ever eaten a tuna melt that tasted less like a tuna melt, more like a tuna salad with cheese. The synergy was lacking. I'd definitely go back to Joe Junior for burgers, though. 167 3rd Ave, New York, NY (map); 212-473-5150 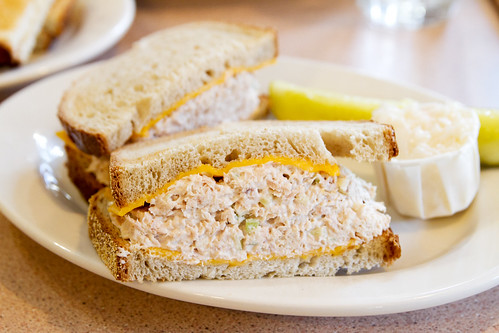 Ok. I'm going to ask the question everyone else is thinking: what do you do about bad breath after eating a tuna melt?!

How about the tuna melt at Eisenberg's on 5th ave. and 22nd st.? That is my favorite in NYC however the one from Classic Coffee Shop looks perfect.

I think I know what I'm making for lunch tomorrow. But egads tuna melt on a croissant. Love that Americans know how to party! lol

Olivia: I just continue to have smelly breath. :D

It's not like I have anyone to kiss. Until Kåre gets here. [sniffle]

ER: I haven't tried their tuna melt yet, but I will put that on my to-do list! I did like their tuna salad sandwich the one time I tried it.

hey robyn! fun fact, i used to not be able to come within 10 feet of mayo but after seeing all of the juicy pics on your blog, i convinced myself to try my first tuna melt! this was years ago and i've since graduated to chicken salad on bagels (eaten openfaced, bagel buttered and toasted beforehand). anyway, sometimes when i read your blog now i realize just how much you've influenced my diet over the years! thanks!! have a sweet day :)

Good for you--them's my sentiments. Love the Classic Coffee Shop.

maggie: Oh man, if I've influenced your diet, then you might be grossly unhealthy now.. ;_; Sorry! I hope happiness has been involved in your new dietary choices, hehe. MAYO IS AWESOME!!! MAYO FOREVER!!!! Thanks for reading!

GT: Thanks for reading, glad to hear you're a Classic Coffee Shop fan!

Mmmmm. Nothing like a great tuna melt! I'm uh, sadly without tuna, it's 11 PM, I'm surfing the 'net and now I am craving it thanks to all your pics. ;)

So...this has nothing to do with tuna melts, but I came across this photoshoot collection from a corgi meet and your name was the first that came up on my 'MUST SHARE' mental list!
http://www.komonews.com/news/local/Photos-over-corgis-at-the-PNW-Corgi-Picnic-219175431.html

Oh man! This place brings back memories. I used to attend the elementary school across the street (what up P.S. 42!) from like 1989-1996. Kids would always go there for lunch and get their bagels and whatnot. I tasted my first ever bagel with cream cheese and jam there and it was mind blowing at the time. I'm so glad they're still open! I frickin love tuna melts too and now will have to go back there. Squeee!

Oooh, tuna melt!!! This almost feels like Goldilocks and the Three Bears... the first one looks just right! And I've got egg cream on my bucket list, yo.

Oh damn, I am behind on comments, sorry, guys! If you are reading this!

The Kitchen Magpie: I hope you've fulfilled your craving by now!

Jane: OMG. SO CUTE. SO MANY STUBBY NUB LEGS! Thank you for sharing!

Judy: Damn, I wish there'd been a place like Classic Coffee Shop across from my elementary school! Yup, you've gotta go back.

Row: If you can't make your way to NYC for an egg cream, it shouldn't be too hard to make it yourself. Let me know if you do!