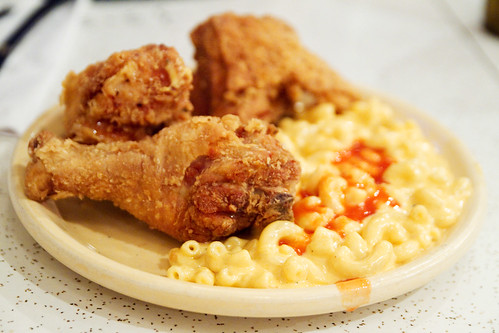 If I hadn't moved out of South Williamsburg at the end of 2008, I would've only been a 10 minute walk from Pies 'n' Thighs, the beloved Southern food joint that opened in 2006, closed abruptly in January 2008 with plans to reopen later that year, and then, two years later, finally reopened on March 1, 2010, in a new, larger location.

As I had never been to the original location, I didn't feel the burning need to visit the new incarnation of Pies 'n' Thighs upon immediate application of clean, non-sleepwear clothing. (I just realized that this may only make sense to me because I'm wearing pajamas right now. I'm usually wearing clean, non-sleepwear clothing. ...Pinky swear.) But judging from the excitement and reviews of the food-loving [SOCIAL MEDIA ALERT] Twitterverse and blogosphere [/SOCIAL MEDIA ALERT], I should've been ready to run over all plodding grandmas and napping puppies that lay in my path (yes, this path is paved with old people and helpless heart meltingly-cute animals, for some reason) to get to New York City's latest outpost of fried-chicken-and-pie greatness. My high expectations were lowered when a close food-loving source described the food as just okay, and the service as a bit sloppy. But I still wanted to try it...eventually.

I finally made it over on May 27. With the help of Janet's malleable stomach, I tried their fried pickles, burger, fried chicken, mac and cheese, and biscuit. And it was all good.

The fried chicken box comes with three pieces of brined deep fried chicken*, a hefty biscuit, and one side. It's a great deal for $11, especially when you consider that it could be split between two people with normal appetites and leave room for dessert. If you eat more than that you'll likely enter the "food coma" stage. Which is what happened to Janet and me.

* I googled around to see what the three parts are and I ended up with breast, thigh, drumstick, and wing. Considering the name of the place is Pies 'n' Thighs, I'd think there's a thigh in there. Alas, I don't know enough about chicken cuts to recognize what's what. If it weren't 2 a.m. I'd consider calling the restaurant.

The crunchy, light breading gave way to adequately moist, flavorful meat, which is how fried chicken should be all the time, but isn't. There wasn't anything special about the mac and cheese—it looked like what I imagine I would've eaten as a kid if I ate mac and cheese as a kid (my mom never made it, and I guess I never ordered it when we went out to eat), but it was comforting and full of creamy dairy goo-laden elbow macaroni. I was happy with it. 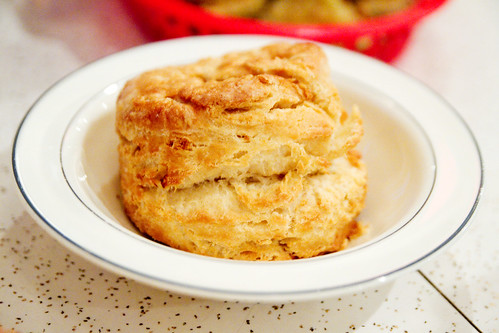 The warm biscuit was moist, soft, crispy, and flaky all at once, in all the right places. Perhaps not the best biscuit ever if you grew up eating biscuits in the South, but I had a biscuit-less childhood in New Jersey, so in my opinion this biscuit is great. 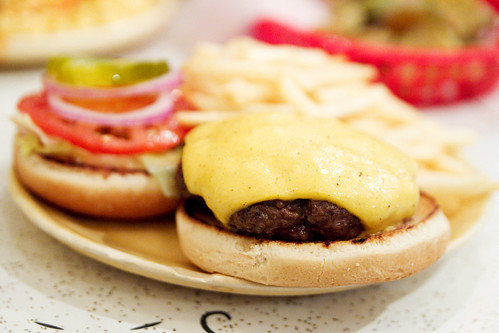 After reading Nick's rave review, I had to try the cheeseburger ($9, comes with fries). And Nick was right; it's a solid, classic-style burger. You can add bacon or egg, but I just added cheese for $1. 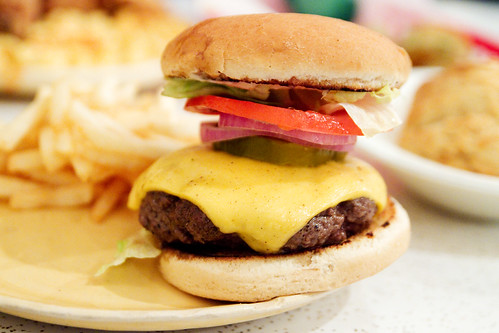 By default you get pickles chips (or in my case, one pickle chip; more would've been preferable), sliced red onion, tomato, and lettuce. Smush it in between the toasted halves of a plain mayo-smeared white burger bun and... ...Mm, rare meat. Yup, I prefer my meat on the bloody side, but as long as it's juicy I don't mind if it's cooked more. The veggie toppings provided a nice crunchy contrast to the seared 6-ounce grass fed patty. I found the burger's size and ratio of bread-toppings-meat just right for my tastes. The fried pickles were great nubs of juicy tartness in a thin, crispy coating. I don't see it on the menu, so it may have been a special that night. We polished off just about everything aside from a fried pickle slice and a biscuit chunk. Unfortunately, eating to the brink of exploding a digestive organ meant there wasn't any room for pie. But that's okay; I would just get them next time. And then "next time" came! In mid-July. Greg, Kathy, Shann, Karen, and I shared three orders of the fried chicken box and three slices of pie. I also got a cup of sweet tea because that's my preferred version of tea: more sweet, less tea.

The food tasted better during this second visit, and the experience was overall more pleasant because we were seated in one of the two spacious back rooms instead of my first visit where Janet and I were crammed in a table in the front. I was afraid I would accidentally elbow my neighbor's...elbow.

Another difference between this visit and my last was that we had a squeeze bottle of honey on our table. And I put it on everything....that would benefit from it. By that I mean the fried chicken and the biscuit. I thought the biscuit was good before, but smother it in honey and HOOOO MAMA, +1000 POINTS, you have entered the next level of biscuit-dom. The chicken fared better as well, although not just because of the honey. The fried chicken tasted crispier and juicier than before. Or maybe I was really hungry. At that point, possibly with chicken juices running down my palms, I placed Pies 'n' Thighs in the "Maaan..This Is Pretty Awesome" category. The chunky dill-flecked potato salad was a great side, along with the repeat mac and cheese, and a refreshing watermelon salad mixed with chopped cucumber, mint, and jalapeno nublets (you know, smaller than nubs) for a spicy kick. That looks far too red, but the salad looked something like that. As Kathy said, the pies—apple and cheddar, banana cream, and rhubarb—were, unfortunately, just passable. Not bad, not great. Although $4.50 per slice isn't unreasonable, the pie didn't taste worth it after having gorged on all that fried chicken.

I've heard complaints about service falling into the "indifferent hipster" camp, but (luckily, perhaps?) the service I encountered was unobjectionable. Not effusively friendly (not that many places are), but the food came out in a timely manner and I didn't feel like I was forgotten. Admittedly, I have low standards: "They didn't stab me; it was great!"

I left Pies 'n' Thighs feeling happy and fattened for about $15. That's a good takeaway message.

For a second, before I read the caption and paragraph that preceded the picture, I thought the watermelon salad was poke. Oh my Hawaiian state of mind.

The shot of the chicken, biscuit and mac-n-cheese looks damned tasty. Never been but been wanting to try it out.

The streets of Williamsburg are packed with either a) old people or b) helpless puppies? Hmm, good to know. If I had to trample them, I dunno how I'd feel. I don't particularly love old people, but I do love puppies, so...

On a side note... NOW I WANT FRIED CHICKEN?

Marvo: HAHA, it does look poke-esque. If only we had more Hawaiian food here. :(

FN: Try it when you can!

the fried chicken was a good call. other recommended orders: chicken biscuit + slaw. the catfish, which is probably the most slept on entree. key lime pie. donuts.

As a girl raised in the South, I will say that Pies & Thighs officially meets my "I need a Southern food FIX" mark. Definitely a fan of the chicken and biscuits, and I thought the pie was pretty darn good. But, I might be biased by all the good press First Prize Pies gets, ya know?

No matter, now I want to go back. Damn you!

the best baked good at P&T is the maple cookie.

and you REALLY need to try the cheeseburger at the Commodore. Top 5 in the city for realz.

I'm with ya on the pies being just ok -- I ordered the banana cream (they were out of rhubarb) and was kinda underwhelmed...I think they might use banana extract instead of fresh fruit.

Mmmm all that food looks so good! Am I the only one who thinks Pies n Thighs sounds kind of like a strip club that sells pie? That watermelon salad is in serious need of some feta cheese.

finn: Thanks for the recs! Next time I go back I intend on trying ALL OF THOSE THINGS.

Emily: Aw yeah, glad to hear it got the Southern girl stamp of approval! You + Melissa + me should head back there.

bill: Oo, another pie for me to try...will do. And sounds like I need to get to the Commodore too. I WILL DO IT ALL.

Angeline: I didn't think it sounded like a strip joint..until..NOW!

Ah yes, next time you come back I will bring you to hipster land!

"there wasn't any room for pie."

THERE WASN'T ANY ROOM FOR PIE?!

Yeeeeeeees, you me and Melissa would be a fantastic trip. Don't think she's been yet, either. We'll have to do some menu demolishing since I've only been for brunch.

I was there this past Sunday and I already want to go back. Fried. Chicken.

Emily: AHH WE MUST GET MELISSA THERE, this will happen.

Lunch: GO TRY ITTTTT unless you already have, in which case GO AGAIN!

unfortunate about the mac n chees.e used to be the bomb at its old hole-in-back-of-bar spot!

So glad you posted the pics! I've been looking for a place in NYC with good fried pickles, and these look fantastic!

Mmmmm- southern food is definitely one thing lacking in Taipei.. The closest thing sadly is KFC and don't even have mashed potatoes and slaw here. The fried pickles look interesting!

I *heart* anyone who can use 'up the wazoo' in relation to banana cream anything...

I LOVES THE BURGER!

but not as much as the chicken :D

I still can't believe I used to live one block away from them.