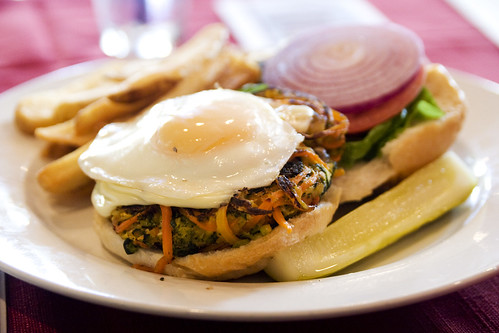 The next morning at National Mechanics, I started my day with their veggie burger... ...While I had this somewhat awkward vantage point. Because I was there for the 215 Festival's Food Bloggers Brunch! Alex and Mel came to support me (how I love them so) as I sat at the front of the dining room with E, Taylor, Drew, Collin, and Ben while we answered various questions about the food bloggin-life. Many thanks to Jessica, moderator of the panel, for inviting me even though I'm not based in Philadelphia. I always find a way to slip through the cracks. Oh yes. [HEY LIFE: THANKS FOR LETTING ME SLIP THROUGH THE CRACKS] And many thanks to the young woman who came up to me afterward to complement me on my Iceland photos. :) After passing some random jugglers (part of the 27th Annual Philadelphia Jugglers Festival—duh), Mel, Alex, and I took a bus to The Piazza, a newish development of shops, housing, and food in Northern Liberties that features a huge open-air plaza with a huge-ass TV to match, enclosed by modern apartment buildings. It sort of reminded me of Ssamziegil in Seoul, a multi-level shopping complex with the same "lots of windows and clean lines" aesthetic, but with way less space and way more humans. We roamed around the area, not buying or eating anything (too full to try PYT; maybe another time) until we reached A Full Plate where you can try E's baked goods.

And we did. A woman in the audience of the Food Bloggers Brunch expressed fervent love for E's Elvis cake made of banana chocolate chip cake with peanut butter frosting. We were in luck; there was just one slice left. 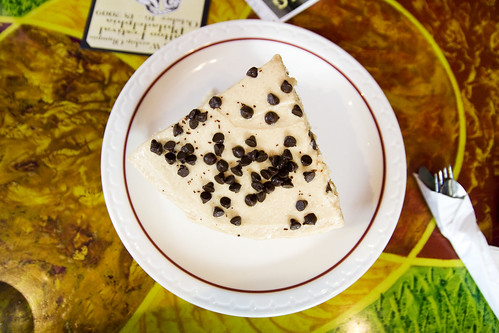 ...One slice being nearly a quarter of the full cake. Our waiter said it was too small for two slices (those are some generous slices), so he just gave us what was left. (Lady M would so not approve.) We weren't going to argue with that. And there was no way in hell were were going to finish that block of cake, but we tried. It was quite dense with clean, not overly sweet flavors. I would've liked it if it were more moist, but I think I was mostly overwhelmed by its towering height.

We attempted to burn off the calories by walking back to civilization/Alex's apartment, passing a few interesting sights along the way, such as... I want that stool. 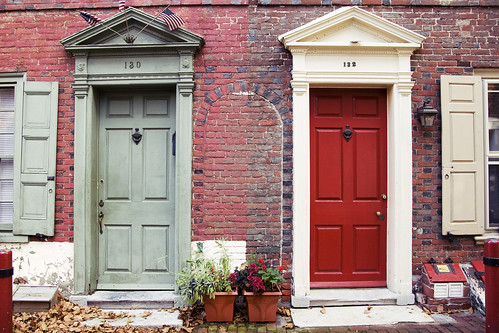 Elfreth's Alley, one of the oldest streets (established in the 1700s) in the country that people still live on. 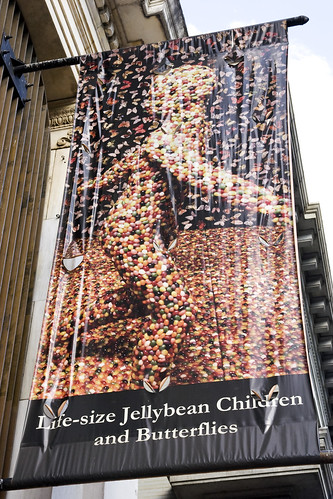 And a giant banner outside the National Liberty Museum advertising the presence of life-size jellybean children and butterflies because holy gee yes that's why I came to Philadelphia, to have nightmares filled with frolicking multicolored jellybean children, frozen mid-step. (I mean, it looks cool, but when they go on forever it starts to get a lil' creepy.) 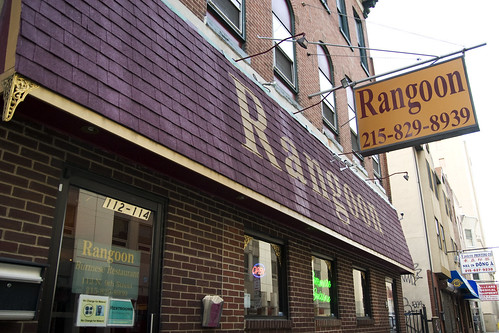 After poking around the Internet for restaurant recommendations, we settled on eating dinner at Burmese restaurant Rangoon, which is not as tacky as its awesome 90s-looking-era website, for better or worse. During the food blogger panel, Collin had pointed out the Firecracker Lentil Fritters—made of ground lentils mixed with onion, mint, chilis, and spices—as possessing "burn your face off and whatever else is left of you" hotness, but it was quite manageable. At least, with the expectation that it would leave a trail of ash as it traveled through my digestive system. It's spicy, but won't make you beg for death. Oh yeah, and there's nothing to dislike about crispy fried nuggets of lentil, so eat it. 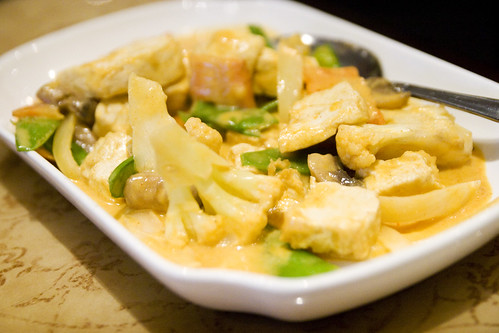 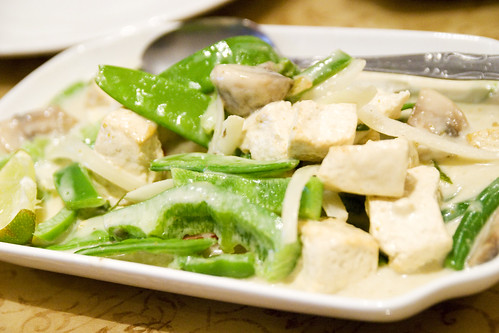 TOFU, SO MUCH OF IT.

We loaded up on the tofu for an Alex-friendly meal with Coconut Tofu (tofu, cauliflower, snow peas, carrots, and onions in a coconut sauce) and Jungle Tofu (tofu, bell peppers, string beans, snow peas, lime leaves, and onions in a coconut green curry sauce). We liked the Jungle Tofu more, although by this point in time I can't remember the specifics of what either dish tasted like. ...Just trust me. The tofu cubes had a pleasing texture, not too soft or firm, with a bit of bite to them. 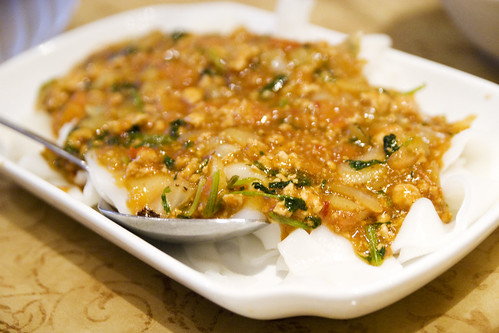 Mel and I also shared the Rangoon House Noodle made of flat rice noodles with ground chicken, onions, and tomatoes in a red bean sauce. ...So says the menu. There's obviously other stuff in there that I can't identify. Once again, you'll just have to trust me and my nonexistent description that it was tasty and worth ordering. I say that, though, as someone who loves just about all applications of flat rice noodles, so pleasantly firm and chewy they are. (Rice noodles are my favorite member of the noodle kingdom, besides that rice is my favorite grain. Boring, basically nutrition-less, white rice.)

I've only eaten Burmese food once, at Mingala in New York City. This was better, meaning I can truthfully label it the best Burmese food I've ever had.

And thus my 27 hours in Philly came to a close. I love visiting Philly, but 99% of that love is derived from the presence of Alex and Mel. Assuming I die before they do, I should never have to experience a Philadelphia without Alex or Mel. HEAR THAT GUYS? NO DYING.

Posting at a rather late hour, no?

I am endlessly jealous of your food-adventures.

EyeNoU: I usually post late...refer to most other posts I've written, haha. This wasn't even that late for me.

Teresa: And I'm jealous that I don't get to go to ROFLCON! :)

Great pictures of Philadelphia and thanks for the review of Rangoon. It sure looks worth the visit. Next time you come to Philly, take the speedline to Collingswood (South Jersey) and visit some of the really cool restaurants there.

As the complimentary Iceland picture person (whoa what a descriptor), coming up and sharing my appreciation of those images was like calling up some NPR host and basically going 'long time listener, first time caller,' and then being an idiot.

Though the sentiment was accurate.

As a long time reader of TGWAE, it was an absolute honor having you on the panel. I give you honorary Philadelphian status or something. I totally have the power to do that.

Preston: I'm totally unfamiliar with South Jersey..oops. Thanks for the rec!

Jess: You totally have the power. I feel the Philly blood runnin through my veins. Cos of youuu.

i'm absolutely jealous of all the food you have in the USA! :( i shall conquer USA some day haha :P love your photos and description too! makes me want more. :) come to the land down under! we have some really good food too. ehehe.

Ok, this does it. Now I have to go to Philly. If only to stroll down Elfreth's Alley. I am such a suckah for quaint historic streets.

p.s. i am eagerly awaiting whatever awesome post you're going to put up regarding your halloween festivities. ;-)

Yii: I've heard good things about your food! I WANT TO EAT IT ALLLL!

Adelyn: Get ready to be disappointed: I totally did nothing Halloweeny. :( No costume. Which was fine cos I was pooped anyway. HOWEVER, I did dress up my manatee!

oh wow, I just had a burlesque show in the backroom bar at PYT a few weekends ago.
but having been there several times, I can tell you that the burgers are good, but not great, in my opinion (a little too greasy).
however, the fries and milkshakes are awesome, definitely worth going for.

I've never been to a full plate, I gotta try that out.

rangoon unfortunately ain't that good; looking for a serious gem in philly's chinatown but not yet found it although I had high hopes for Pho 59 (or something like that).

burmese in nyc is hard to come by, I just resign myself to the yearly fun fair in briarwood (although this year was not as amazing as previous years).

I like r Iceland photos very much but seriously it's hard to born and grew up in the tropical and then grew up here in the wind, cold-seems like the weather is getting warmer with every year though. If u had come about 10 years ago in winter time u would be blown away cuz the wind here is crazy all year round.