This entry originally took place on April 21. I thought I could shove all this nature stuff in one post, but it was becoming too ginormous. So, two entries it is. Just to warn you, there's no food in this one, except for a brief mention of the semi-digested kind. Check out other posts about Iceland for more food stuff. 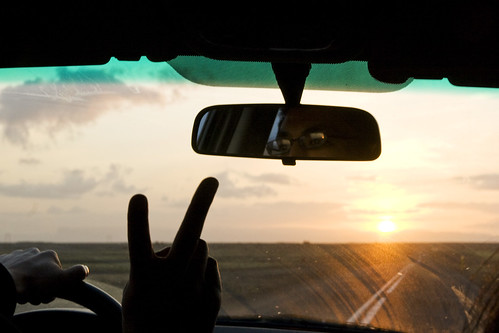 But I didn't have to drive, so it was cool with me. Greg took the wheel as Diana rode shotgun and I splayed my girth across the back seat on our adventure to Jökulsárlón, a glacier lake near the southeast coast of Iceland. The road to Jökulsárlón was paved with varying expanses of vast nothingness, a few small towns, waterfalls, rocky shorelines, mountains, and minimal interaction with other humans.

Oh, and a brief moment when I threw up (for the first time in ages, due to car sickness at least) the orange juice and toast I had eaten for breakfast that morning. And got some of it on my wool coat because even though I had the foresight to clear out a plastic bag for a makeshift puke bucket, my nauseated mind wasn't able to aim correctly. And I only realized now that I have yet to bring that coat to the dry cleaner. [Don't worry, I got it cleaned since starting this post.]

But let's get back to more pleasant things. 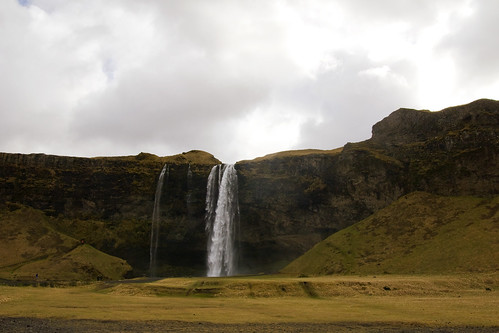 A wee trickle in Mother Nature's bosom...or something.

First up was Seljalandsfoss. It may not look like much from far away—you know, your standard cool looking Icelandic waterfall... 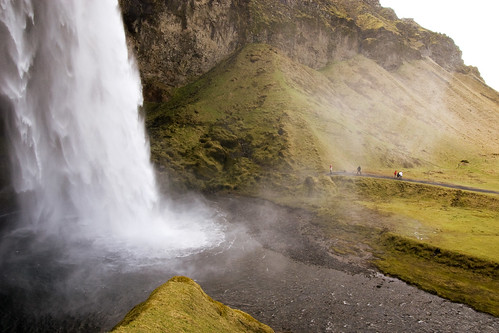 But you can get close. 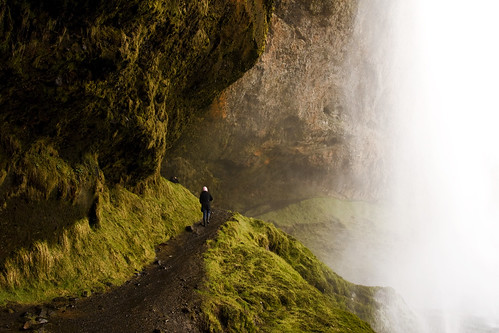 I mean, really close. Because you can walk behind it. 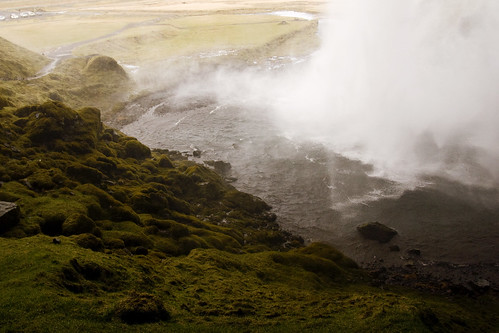 Just make sure not to roll down into a lumpy, rocky pit of doom. 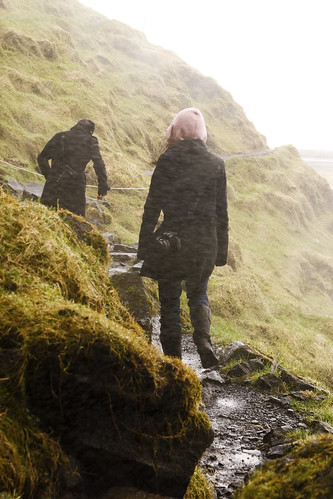 We emerged victorious, cold, and damp.

As apparent in this video shot by Greg, who so observantly notes, "We're getting wet, hehe."

The hugeness is clearer when you put us in front of the falls. Greg shot this video of an itty bitty me taking a photo of and itty bitty Diana jumping. (Methinks he didn't intend to get us in the shot, but we were..ye know, there.) 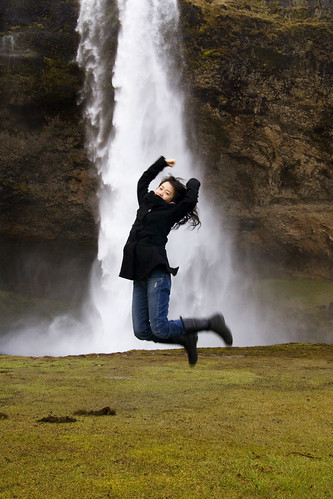 Diana shot this video of Greg taking a photo of me jumping. I'm what you might call...an awkwardly squat gal. Also, I have a laugh that channels my inner hyena. It'll appear in future videos; don't you worry. 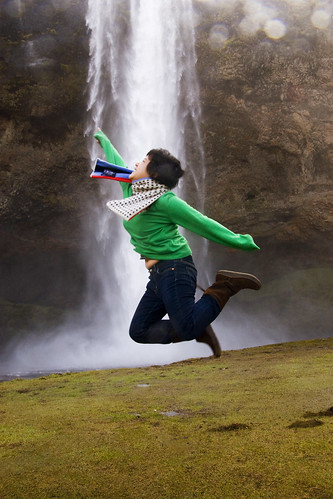 And there's my belly fat. Some people think it's funny to poke at it. I disagree. 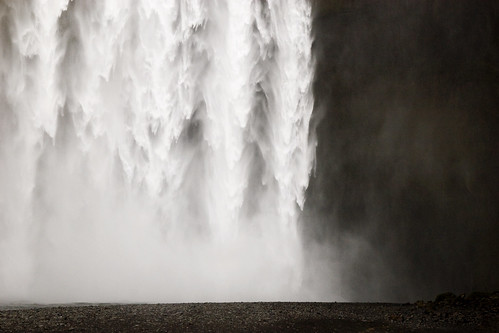 It's water! It falls!

Then it was on to Skógafoss where the weather changed three times in half an hour, thus fulfilling the Icelandic saying, "If you don't like the weather right now, just wait five minutes." As we pulled up to the falls, we could see a rainbow peek out from the bottom. Sweet! I walked closer to the water and felt the wayward mist hit my face...and hit harder...until I realized it was no longer a pleasant mist hitting my face, but an unpleasant barrage of teeny clumps of frozen water threatening to bore pits into my epidermis. A hailstorm had begun, as reflected by the sky's transformation from blue to an ominous blanket of dark gray.

Looking away from the falls, you can see that the divide between "gloom and hail" and "happiness and sun" could be measured in minutes. 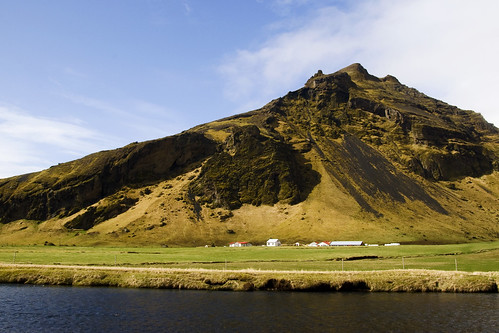 So back towards the waterfall, I went. 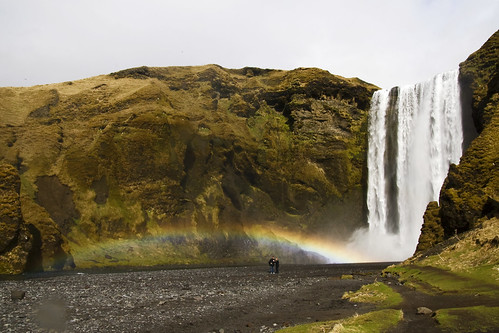 And a projection of the sunlight's color spectrum on a wall of mist, I received.

This water is NOT FALLING. 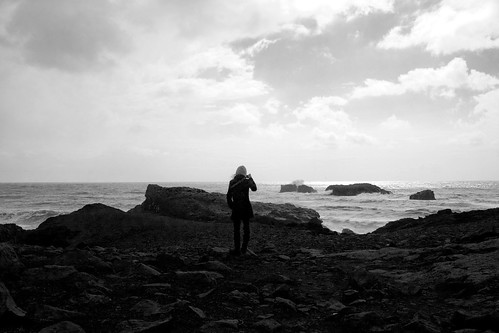 I ought to use the "when the color is shitty, just turn it into a black and white photo" technique more often.

At the time I don't think I fully grasped that we were just standing on the rim of Iceland. Beyond that, water. Surreal? A smidge. 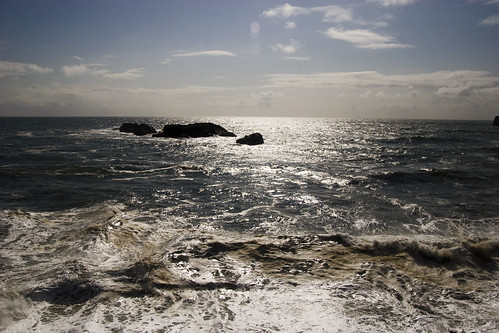 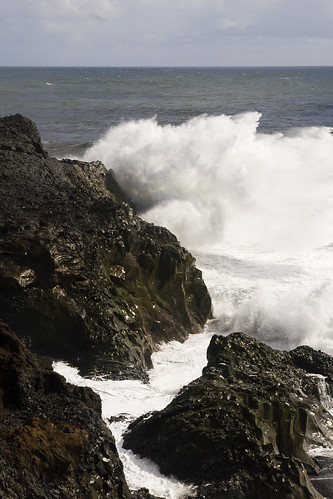 And the death rocks. 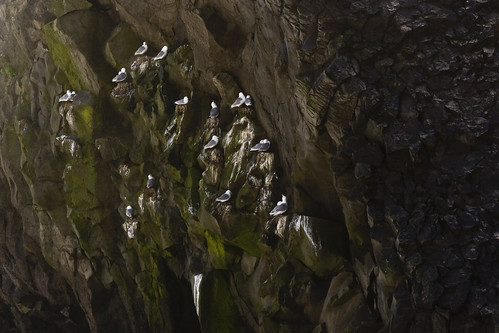 Birds + poo on the side of one of the cliffs. 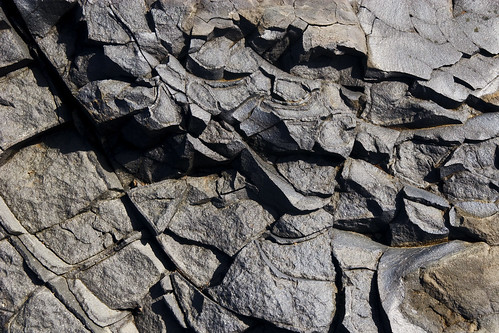 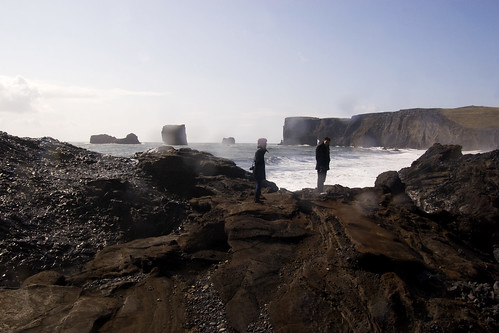 Rocks with people on them. 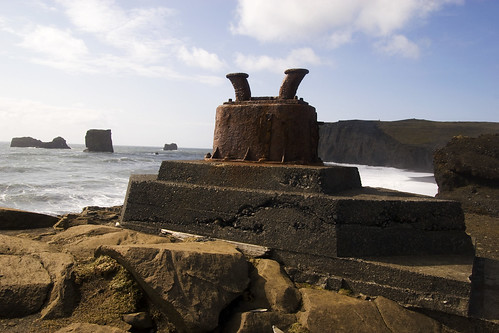 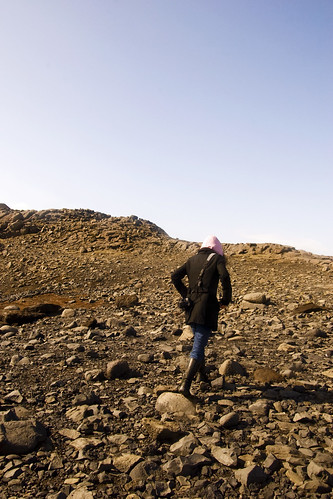 And to the non-water side, lots of dirt and rocks.

After reading this post, I really want to go to Iceland. It's beautiful ,and the only thing that scares me is the rotten egg water. Other than that, yay Iceland!

Robyn, that shot of you jumping is kewl. :-)

One of my favorite days.

WOW, these photos are great. I've been a lurker for a while on tour blog and love it!!!

Let me tell you, outside of Reykjavik, with the exception of Akureyri in the North, the rest of Iceland is not for eating. I consumed one too many "ham" and processed cheese sandwiches between these two cities.

Jasmine: Rotten egg water is worth it!

Amy: Not just on a food blog, on SOMETHING ROBOPPY WROTE. Cos I don't go into nature much. Yeah.

Ed: When your country is huge has so few people, the nature goes fairly untouched!

Deb: Thanks! And yay for delurking.

Aah, iz beautiful.
Party cat has no place in Iceland.

Graeme: I think Party Cat wants to kill its owner.

I don't think I've even been to a proper waterfall (well, not one that was above ground, at least). It looks awesome (in the original sense of the word).