This entry originally took place on April 18 during my trip to Iceland from the 18 to 24.

After a strenuous day day of...napping and going to the supermarket, we roamed the streets of Reykjavik unsure of where to eat dinner. Like so:

"Where do you wanna eat guys?"

Since the long daylight hours threw off our sense of time, we didn't head out until about 9 p.m., a bit late for eating dinner in Reykjavik. 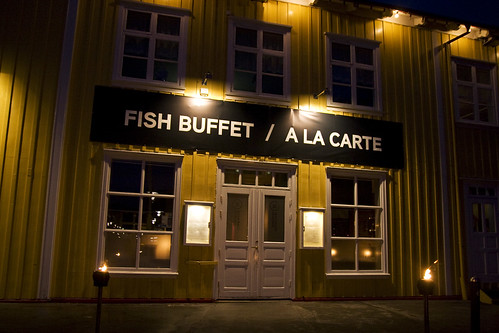 The giant sign proclaiming "FISH BUFFET" was sort of appealing. Not really. 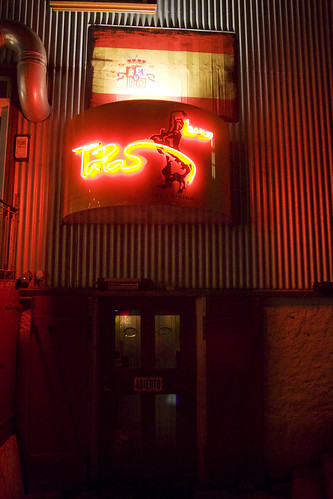 But then we spotted Tapas across the street and made a beeline towards its glowing sign because 1) it was open, and 2) I read a recommendation for it online.

Who chooses to eat their first dinner in Iceland at a Spanish restaurant? Er. Uh. It's okay; they had a set Icelandic menu! We ordered that along with a few other dishes (non-Icelandic menu dishes are noted). 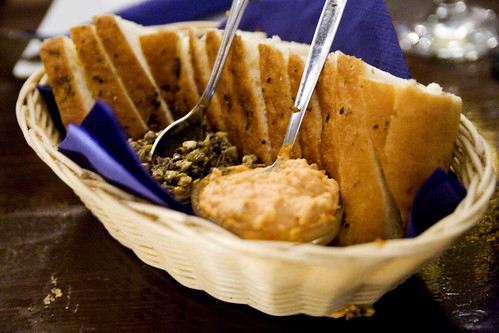 First off, bread! Actually, first was a shot of Brennavin, Icelandic schnapps with a strong flavor of caraway seeds and a gagably high percentage of alcohol. Of course, that's coming from me, the person who doesn't like alcohol. Most liquors remind me of rubbing alcohol. Appeal = none.

Bread was nice. Soft and kinda squidgy. It came with a hummus-like spread and tapenade. 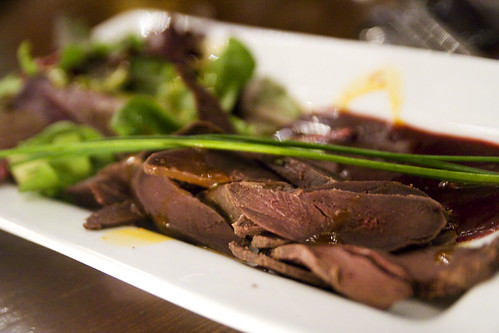 Smoked puffin with blueberry “brennivín” sauce: This was the first taste of puffin for all three of us. Overall consensus: not bad. With it's dense liver-like consistency (although not flavor), it certainly didn't remind me of poultry. Beef tongue sprung to mind. 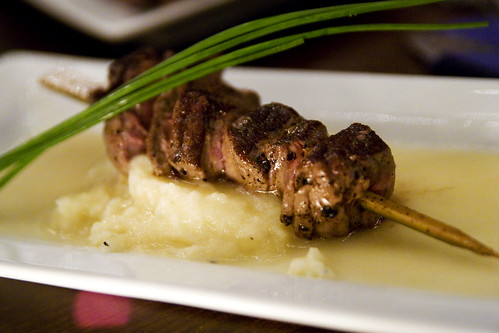 Red deer with Calvados sauce: I can't recall what this tasted like. Steaky, perhaps. (Not a part of the set Icelandic menu.) 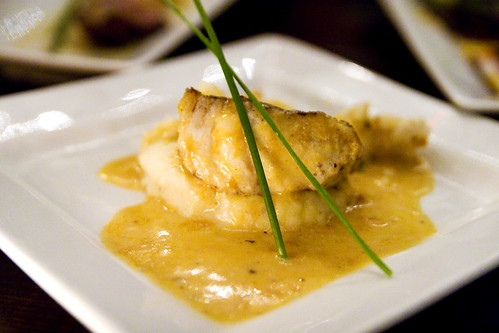 Pan-fried monkfish with lobster sauce: This was a notably firm, meaty fish, not a delicate, flaky thing. Good stuff. 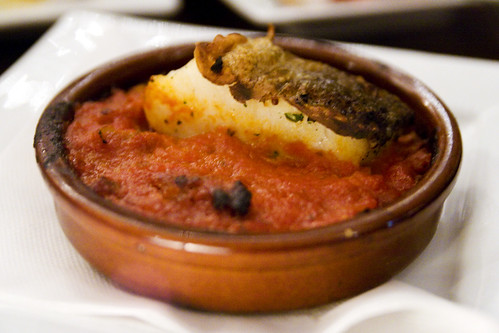 Saltfish with chourizo in tomato-date sauce: There's lots of dried cod in Iceland, but I think this was the only time we ate it. I liked that there were slivered almonds in the sauce—mm, crunchy. (Not a part of the set Icelandic menu.) 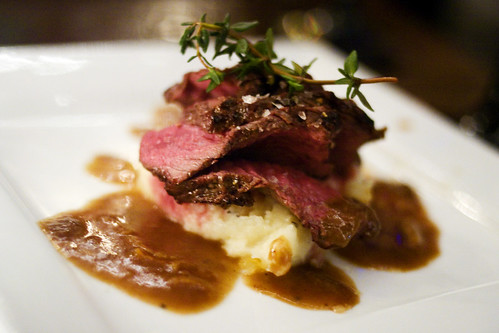 Minke whale with cranberry sauce: Looks like steak and kind of tastes like it too, but with finer muscle fibers. Is it a bad thing that I'm not bothered by eating whale? Am I cold and heartless? ;_; 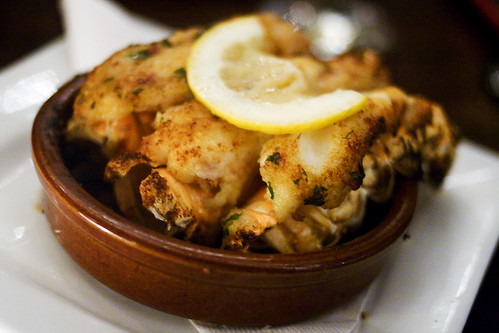 Lobster tails baked in garlic: Lobster in Iceland isn't like the huge ass things you see swimming in Chinese restaurant tanks here, but smaller langoustines. To me they tasted less sea-y/briny than lobster and with a meatier texture. Maybe like a cross between lobster or shrimp, although considering that I don't eat much lobster or shrimp, you may not want to listen to me. Uhh, just eat it. The end. 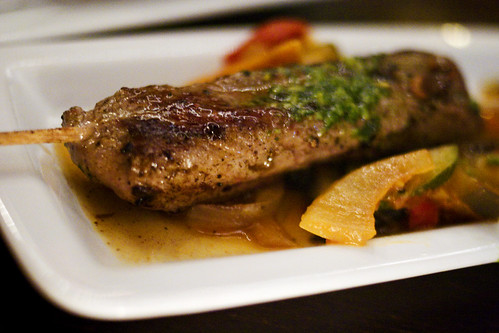 Grilled Icelandic lamb Samfaina: Ah lamb, that cute, fluffy animal that turns into a funky meat, accompanied by a ratatouille. I don't love or dislike lamb, but in Iceland where lamb roam wild and free (in all that land beyond Reykjavik) you have to eat it. 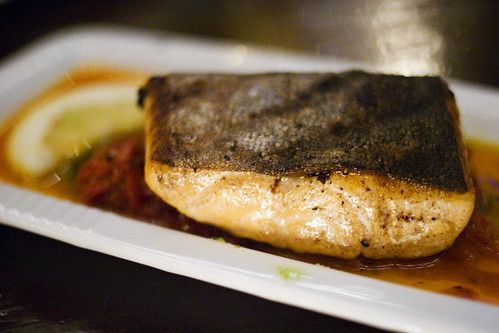 Icelandic sea trout with peppers salsa: Tastes like a nice chunk of moist, buttery salmon. I assume sea trout is in the same family. 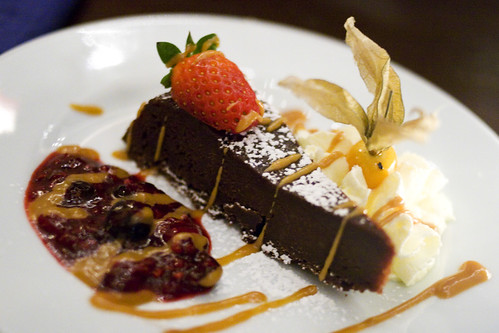 Chocolate cake with berry compoté and whipped cream: Mm, dense wedge of ganache-y chocolate goodness with a splodge of thick Icelandic whipped cream. I had whipped cream a few times during my trip and it was always this awesomely rich cloud of barely sweetened dairy fat.

It was a nice way to end a satisfying meal. I wouldn't go to Tapas twice in one vacation, but for an introduction to Icelandic meats, it did a good job, especially when shared between three people. 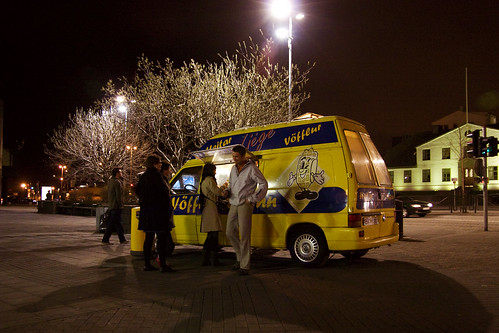 Even though we were quite full while lumbering up Austurstraeti, all senses of moderation were thrown out the window when we came across Vöffluvagninn, or Waffle Wagon/Truck/Mobile/What Have You, in Lækjartorg, the main square at the start of Laugavegur. At first I merely took a photo, internally fought with myself for about 1.5 seconds about whether or not I should eat a waffle, and walked on...and then a few steps later realized the errors of my ways and redirected myself towards waffle goodness. (A good thing as it only operates on the weekend, Friday and Saturday nights I'd assume.) 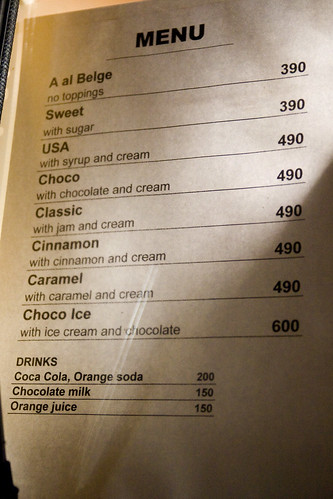 I wonder if you can get one with everything. Damn.

So many choices. It was easier to decide when Greg said he wanted a USA, narrowing my choices down..by one. I went with a classic topped with jam and whipped cream. 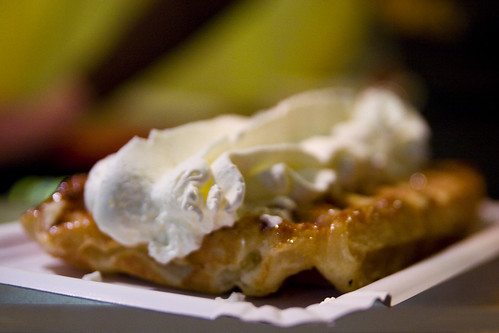 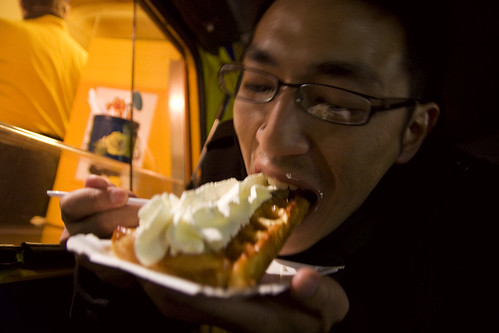 And then Greg wharfed it down. (Isn't "wharfed" an underused word? Yes. I will try it use it more often.) 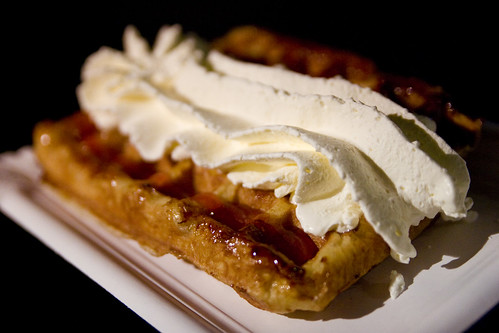 I liked the combination of syrup and cream more than jam and cream, but my "classic" was still tasty. (I actually don't like jam that much with anything. Toast? Cake? Pancakes? Neh.) The waffle was thick and warm, a bit crispy on the outside, and soft and slightly chewy on the inside. Granted, I'm bound to like anything topped with a strip of whipped cream, but even without the whipped cream this would've been a nice waffle. Especially one that came out of a van.

Greg said we need to ship the Waffle Wagon over to NYC. We're aware that Wafels and Dinges exists, but it's not the same! It must be the same Vöffluvagninn adorned by a winking waffle creature-man-something.

As we walked up Laugavegur, we were surrounded by the post-midnight revelers. b5 in particular was a hot spot, boasting a long line out the door. We continued past the line, past the last night crowd loitering on the sidewalks waiting to get into another bar, up to our hotel room where...we promptly stayed up for another few hours (or was that just me?) before the veil of lethargy came over us.

YUMSICLE. Langostines though make me feel ripped off.

Mmmm.. waffles. Icelandic food looks alright! It's crazy how they got them whales though. I really have to try that one of these days. Who would think to kill a big swimming thing and eating it's flesh?

Nice first day, Robyn. I think the tapas place looks quite nice, actually. I like that they have an Icelandic twist to it.

Oh, and there's nothing wrong with eating whale in comparison to any other animal. My biggest problem with whale is that it's flavor varies so much; from meaty whale-goodness to crappy fishliver oil-yuckyness.

Oh, and the waffle-wagon is nice too. Heck, maybe I'll set one up here :p

they should serve the waffle with Skyr! :) Nice posts!

Thanks a lot. I'm now desperate for waffles.

*has a little food spazz* ORSUMZ.
Puffin looks pretty good. Was it fairly tender? All the new meats I've tried so far this year seem to be gamey. There must be a dominance of gamey-tasting animals in the world that is not accurately reflected by farmed animals. Or the western diet just doesn't like gamey flavours.

It's overfishing rather than the eating of whales in my humble opinion. I wouldn't want to deny myself or anyone else at least TRYING whale once in their lifetime.

I want a waffle truck! That trumps creepy ice cream trucks any day (I have never bought anything from an ice cream truck because they are too creepy).

This food looks very familiar....now that opened faced sandwhich you had earlier ....not quite so much.
Very delish looking mmmmmm. I'm so jell, I wanna go now! But I would definitely not be passing up the night scene!!! Partying with Icelanders.. (or whatev they're called) not everybody has a chance to do that ;)

Awesome posts! Did you see any lambs roaming around when you were there? By the way, I was around Grand Central today and I remembered you mentioned the NY Public Library (which I had been meaning to go to for...err..25 years), so I ducked in and spent TWO HOURS there!

Danny: I think in olllden times they just ate the whales when they died and washed up ashore? ...or maybe I'm wrong. But when you're a poor country you have to eat everything, eh?

Morten: I think I had the meaty whale goodness. :D

SuperChomp: Puffin was tender, yeah! I'm not a big fan of super gamey...like funky lamb. I can only take so much.

Anna: I LOVE ICE CREAM TRUCKS! Not that I buy from em much; I just like knowing that they exist.

Missy: I can't even party with Americans, so I don't think I could party with Icelanders either. Wah.

Cheryl: I did see some lambs once we drove out of the city! Not many though. I was hoping to see a huge ass herd of em...and be surrounded by baa-ing.

Whoaa ahours in the library! Cool. You could easily hang out there for a long time. I like libraries with less people in em though. doh.

Puffin reminds me of the episode of No Reservations when Anthony Bourdain attempted catching a puffin in Iceland.