I have one, just one more entry to write about Kåre's visit to New York City, and...it's not done yet. The problem with having a weekend chock full of delicious, inexpensive, fat and starch-laden fooding around Philadelphia is that there's less time to latch myself onto my computer. Which is probably a good thing.

It's also my way of bringing up random things that have been rotting in the back of my mind for ages, like Facebook. Every now and then I get friend requests from people I don't know. Half of the time, these people identify themselves as TGWAE readers, which is cool! Yes, I like you because you aren't appalled by me for whatever reason, and that's quite a feat. The other half of the time, these people don't say anything. Are they blog readers? Are they random people who know me through another random person? Do they even eat food? I don't know, but I don't ask, so I have this graveyard of requests that I don't mean to ignore, but I don't know what choice I have because I DUNNO WHO YOU ARE AND I CAN'T READ YOUR MIND, I'm sorry. If you fall into the latter camp you should virtually poke me to let me know. 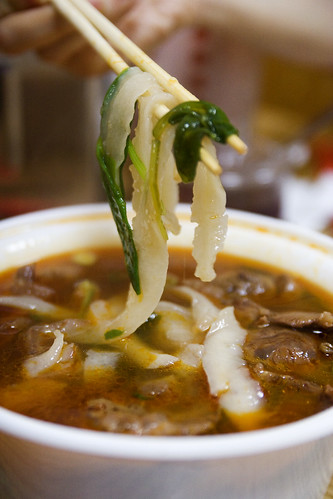 My most recent review on Serious Eats is for Super Taste, one of those hole-in-the-wall hand-pulled noodle restaurants on Eldridge Street. I also got my mom (aka "Mama Lee") to translate the menu from Lan Zhou, which I reviewed before. It was only after Kathy found out how much the English menu sucked that I was like, "Wait, doesn't my mom know Chinese or something?" I keep forgetting about that. 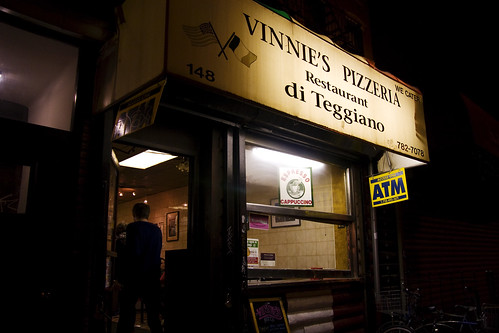 While I vaguely have your attention, I may as well tell you about The Pizza of Death. Not that it was bad pizza; just too much of it eaten at a late hour resulting in Really Overinflated Balloon Stomach Syndrome. Or ROBSS. That's almost my nickname. We were made to be together.

Tristan and I walked to Vinnie's Pizzeria two nights ago around 10:30. As neither of us had eaten dinner—he worked late and I waited for him to come home—we were pretty famished (his words were probably more like, "OH MY GOD I'M STAAAARVING" as his calorie-starved body collapsed at my feet, his hands clawing at my meaty limbs), especially after walking 15-odd minutes in the brisk cold to the pizzeria. I overestimated the capacity of my gurgling, inactive stomach and ended up getting two slices of their "These Pizzas Have Way Too Much Stuff On Them" pizzas: eggplant parmigiana and ricotta, and tortellini. 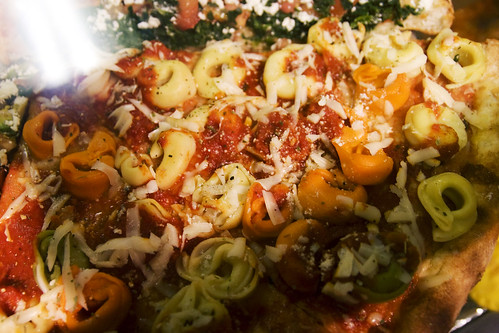 Not the slice I ate last night, but a much crappier photo from before. It looks like the tortellinis are bubbling out of a vat of tomato sauce, maybe.

I picked up the tortellini slice and guessed that it weighed about as much as I did when I popped out of my mother's womb. Oh god. Why did I get pizza topped with tortellini? Why did I get cheese-stuffed carbs on top of cheese-topped carbs?

It tasted good. Like ricotta cheese-filled pasta dumplings on uber-thin, somewhat crispy flatbread topped with some cheese and tomato sauce. The eggplant parm slice was also tasty, thin slices of breaded eggplant interspersed with light ricotta plops. But when I got 75% of the way through each slice, I realized how disgustingly full I was. And despite inching closer to triggering my gag reflex, I kept on eating. Until it hurt. While Tristan had finished both of his vegan slices with room for more, I stared at my two pizza crust-nubs while going, "Nnngggmuhghgng meruhh uhgn." I would've given my pizza remains to Tristan but they weren't vegan-friendly.

I can eat a whole pizza from Otto and half a pie from Lombardi's—maybe even more than that—but few things have pummeled my stomach quite as hard as those two slices of pizza. The time of day (or night, rather) may have had something to do with it as well. While I spent the rest of the night burping pizza fumes and wondering when my stomach would feel less like that of a pregnant whale, the next morning I felt famished. And I'm rarely hungry in the morning—sometimes I don't even get hungry until after noon. Why would I feel super hungry after a filling late night dinner? Was my stomach stretched? Or did my body just really want a vitamin?

In conclusion, one slice of Vinnie's Pizza = good! Two = not good. Also, despite consistently subjecting my body to the pain of over-stuffing, I keep doing it. I also keep burning my mouth on hot soup even though I know burninating liquid + delicate oral cavity skin = DESTRUCTION AND DESPAIR.

I figure everyone has some kind of dumb thing they can't stop doing. ...Right?

I thought I was the only one who wakes up with that hungry feeling after going to sleep full. Finally! Someone understands!
I keep burning my mouth, too. I like my food burninatingly-boiling-steaming hot. Oh, the sacrifices.

Tortellini on a pizza. Crazy americans :)

I started a facebook account just to keep up with a few friends who didn't have a LiveJournal or myspace, and while I meant to only friend them, other people have been finding me--and I mean people who I haven't even talked to or thought about in a decade. It's sorta freaky. Meaning way freaky.

I sympathize with your pizza experience; I did that with carne asada burritos a few nights ago. Glurgh.

tortellini on pizza? that's brilliant. could lasagna be next?

i completely sympathize with eating past the point of pain. i rarely do that with pizza, though (i was born to digest cheese), but with Indian food, forget it. i regularly get so much- all those delicious south indian veg snacks, and then a dosa filled with potatoes, chilis and cheese dipped into lentil sambar and coconut chutney, and of course, 24 ounces of lassi on the side- that 20 minutes later, i'm rolling on any available surface, clutching my stomach and vowing to never, ever eat that much again.

then 20 minutes after that, i'm eyeballing the fried, dense sugary balls of gulab jamin i was smart enough to get from the sweet shop next door to the dosa place (you know, just in case something terrible happens on the way home and i'm stuck in a tunnel somewhere and about to starve to death). against all judgment, i eat two and really feel close to exploding. but i'm smiling through the pain.

wouldn't death by dosa (or your favorite food) be the best way to go?

Haha. I'm imagining a pizza topped with a whole lasagna. What else can be put on there? What about a whole other pizza?

I've had ziti pizza before. It was a leftover from the day before, but man, was it tasty. I always meant to try it fresh, but then I graduated and moved far, far away from college.
My vice: purple grapes...um..full of fiber and water?

I always wake up super-hungry when I eat a lot right before bed. it's very weird.

Probably dehydration from all the food processing/salt.... makes some people hungry..

M: I don't like my food that hot, but...I keep going back for more, as though, "This time I might not get burned!" LIIESS.

Julie: When I first started using FB I got a lot of requests from people I knew in HS...vaguely. Which was weird. But I wasn't enemies with them so I figured, "OK, UR MAH FRIEND."

Ana: Oo, I think I've only overdosed on Indian food once, because I went to once place for dinner, another for ice cream, and another for...non-ice cream dessert. I felt so gross. But it was fun.

Mikey: That sounds like lasagna with a bread crust.

Emi: DID U FIND MEEE?

Ziti pizza is fantastic. Lasagna pizza might be too much. I absolutely have to try tortellini pizza. =)

I know what you mean about the morning hunger though -- I'm never hungry in the morning, unless I've eaten beyond all human capacity the night before. It's the strangest thing!

Wow...that pizza is like an Italian restaurant on a piece of bread...

But, yes, I understand the overfilling. I do that as well. And you ask yourself after...why, why do I always do this...and then you remember...

There is so much food in the world that must be tasted, that we need to sometimes eat massive amounts of it, and be disabled by it.

Oh god that tortellini pizza looks delicious. Maybe I am being over-ambitious in my gluttony but I would have totally tried to eat two slices.

Kathryn: Being so hungry in the morning is probably not a good sign. Eating a lot before bed = baad! ..On that note I'm going out in maybe 20 minutes to eat ramen with a friend. After midnight. WEE!

Kate: There was a time when I didn't feel like I was living to eat. ...That was a long time ago.

Steph: I tried as hard as I could and FAILED TERRIBLY. :(

it's reassuring to know that others have also experienced this state of 'pregnant whale'-ness. keep up the good work! :)

I've been on holiday! So now I'm going to spam you with comments! Yay?

Tortellini on pizza sounds immense! If I could have dairy, I'd totally go for it. I think Asians are built to take double carb hits :) Although, that was possibly a little *too* large a quantity :S