Note: This entry originally took place on October 20 and 21. Also: WOOHOO, OBAMA WON! But I knew he would. Seriously. Now it's time for American to suck less.

While I possess the ability to cook (that is, I have limbs and meager knowledge of knife skills and how long to leave something on the stove before it becomes inedible), I don't usually exercise this ability to make something tasty or special. My priority when I cook is "sustenance," followed by "not hazardous to my health." Over the past week I cooked ramen packets for three of my meals, throwing in chopped kale or cabbage to pretend that my meal was mildly nutritious and not swathed in sodium. 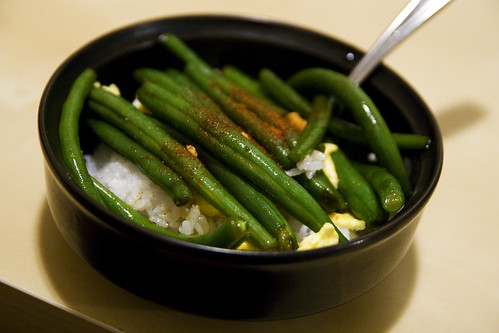 Green means it's good for you, right? Okay.

Thankfully, I never cooked while Kåre was here (I don't torture weegies)—Olivia did! The night that we were to see Lykke Li at the Music Hall of Williamsburg, she brought over some green beans and, using the eggs and rice I already had, made...green beans, scrambled eggs, and rice. She seasoned the green beans with soy sauce and sesame oil, aka, MAGIC SAUCE, and I sprinkled some random chili powder on top of my green beans. Tasty, simple, not deathly, and even vegetarian friendly, not that any of us were vegetarian. 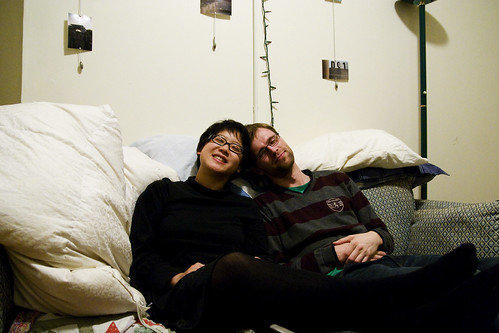 We ate around the coffee table in my bare living room. Methinks this is the only photo of just me and Kåre. It's a nice reminder of what happy times I once had, and how all I have now is SADNESS, so painful, so sharp and daggery, like a boning knife in my kidneys, or something. (Am I joking? Nobody knows! Ha ha! I'm gonna go cry over in that corner now. The bare one.) 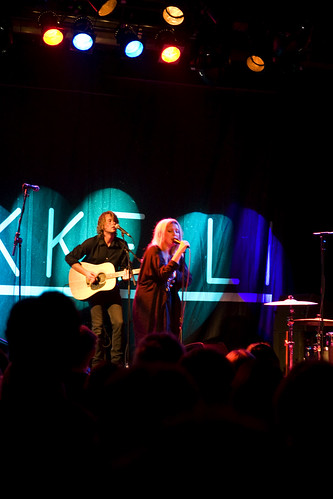 Full of green beans, eggs, and rice, we walked to the Music Hall of Williamsburg and had semi-obstructed views of Swedish awesomeness Lykke Li. If you haven't listened to her before, you should now, and then see her live if she comes to your city. Kåre helped me take the photo, as I'm not over six feet tall.

Day 5 was not much of an eating day. We would make that up the next day.

Bucket of Noodles Killed My Belly 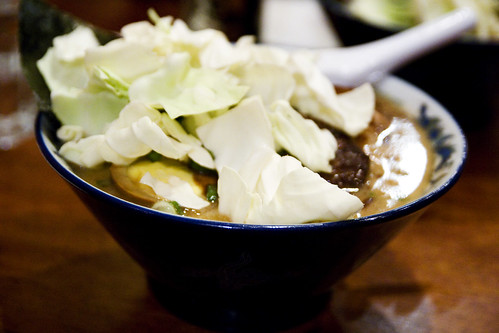 The toroniku ramen from Minca is a giant bowl of fatty pork chunks piled with crunchy raw chopped cabbage leaves floating on a pool of thick porkalicious broth with some ramen in it. The cabbage in the photo is obstructing the porky heart of the bowl. Let me unobstruct for you. 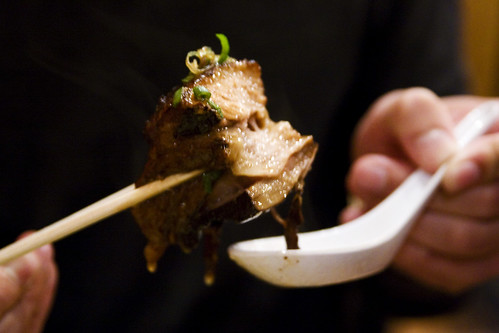 This is no regular pork. This is the kind of pork that is mostly fat with some muscle fibers mixed in for fun. The kind that has a consistency akin to Jell-O. The kind where every bite explodes with juicy fat and immediately melts into a pool of...juicy fat, mixed with some meat that requires minimal chewing. Oh, and sodium; don't forget that. It tastes like it's going to kill you, which means it tastes like unicorn tears. I highly recommend it. 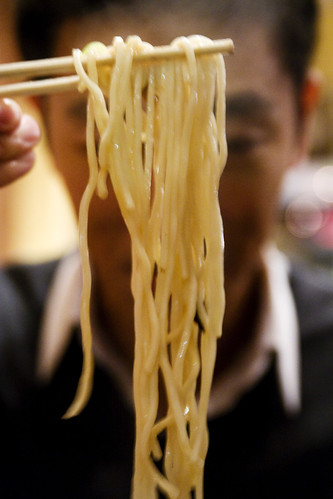 Noodles! With a Greg.

Greg also ordered the toroniku ramen, which he seemed to approve of. I don't remember much about the noodles besides that they were long and a bit springy. Springy = the yay. 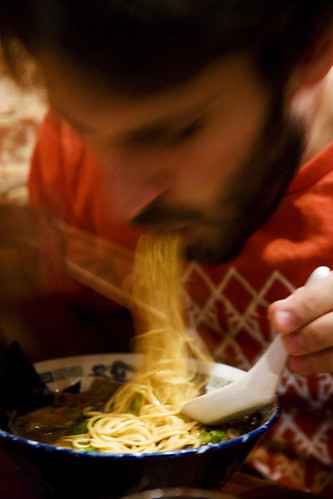 Ezra also approved of the ramen. He recently spent a few months in Japan (or at least a month...how fuzzy my mind is) interning at a gas company, so I really didn't want his ramen-eating experience to be disappointing. 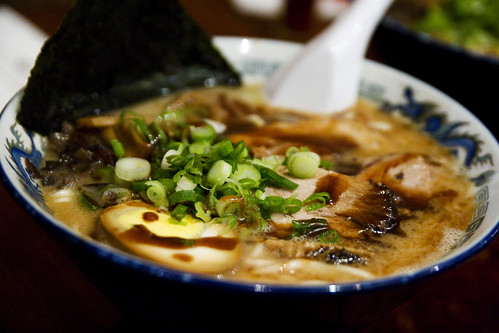 Of course, Kåre also liked his bowl of basic ramen with pork-based salt and garlic oil soup. Although he struggled near the end of the bowl, probably around the point that his stomach had stretched to about 150% of its capacity, he did finish it...except for the one square of nori stuck to the side of the bowl. Not a seaweed fan, I assume. I'll let that slide. ;) 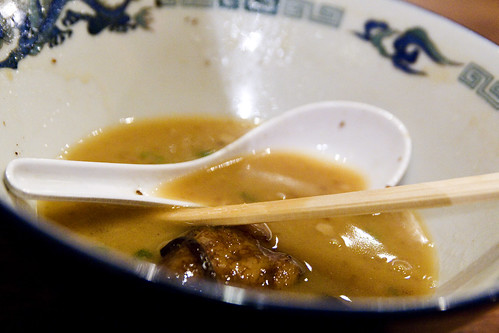 I too nearly finished my bowl except for one chunk of pork...fat. Pork fat. It was just a chunk of fat, sans meat. As much as I love pork fat, pure pork fat crosses the thin line between deliciously fatty and "Uh, this is kind of gross, I'll just poke it and watch it jiggle," fatty. And poke and jiggle-watch, I did.

Near the end of the meal Alice popped in for some dumplings. But she wasn't particularly hungry for dumplings; she was hungry for sweets. And even though the rest of us ate more ramen than seemingly physically possible, we too waddled to our dessert-filled end. 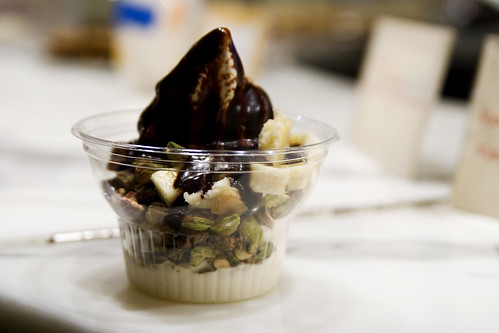 We went to the nearby Dessert Club Chikalicious for some of their excellent soft serve sundaes. Alice and I shared the vanilla bean soft serve hot fudge sundae topped with toasted pistachios, sliced banana, and brownie chunks. While the vanilla soft serve was great—creamy and soft, some of my favorite soft serve traits, aside from tasting like vanilla—I didn't think the brownie chunks were necessary, although more "hot fudge"—or chocolate sauce, more like—would've been nice. I like traditional hot fudge sundaes with gobs of hot fudge, the kind that become semi-solid pockets of chocolate goo when mixed with the cold ice cream. You wouldn't go to Dessert Club for anything traditional—their stuff is like a refined take on "traditional" while still being accessible to everyone—but it made me want one of those gooey chocolate sundaes. Dammit. 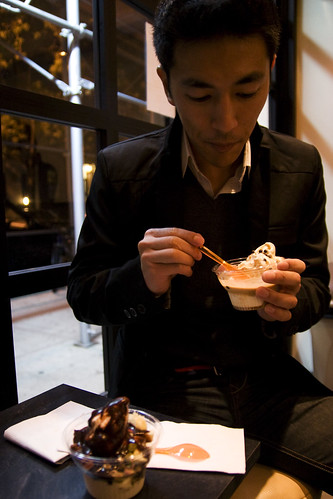 Better than the hot fudge sundae is the espresso ice shot or affogato made with vanilla soft serve doused in a shot of decaf espresso and topped with tiny crunchy chocolate "pearls." (For a better photo, read Ed's Chikalicious review.) Hell, I don't even like coffee and I think this sundae is awesome. I'm okay with coffee flavor as long as it's accompanied by lots of sweet dairy goodness. That's understandable.

Alice wanted a cupcake after eating the sundae, but wasn't satisfied with any of theirs that she tried; she found the frosting too light. The frosting is about as light as whipped cream, in case that's a factor in your cupcake enjoyment. But they're well flavored and make for a satisfying dessert; better to be too light than too heavy.

I don't usually like noodles, but Minca is the reason why I am in my noodle phase.

I also really like the 6th and 7th photo of Greg and Ezra showcasing/eating noodles. Very cool.

The soup / nood bowl looks delicious. Yum. Is it me or is the bean/omelette/rice portion pretty tiny?
Anyway, time to start cooking and posting the results, Robyn :)

Beef or pork topped with raw cabbage is so. freaking. good.

Chickalicious rules! Love that place, wish it were across the street from my house!

Mmmm...porky goodness:) It looks like all sorts of delicious...I would have enjoyed poking the jigglyfat as well. :)

Ooo, I do love brownie chunks in sundaes. I love chocolate sauce too. I would have eaten that whole thing by myself...that's bad...

Oooh I do that with instant noodles too... that is, add vegetables and tell myself mom would approve. It's just so fast and easy!

SK: I usually like ramen noodles...or noodles that have some sproing in them. :D After they lose the sproing, it ain't so good.

G: It is a small portion, but it was enough for the night. :D Yes, one night of not overeating! I think that's how I maintain my weight.

huicheol: Raw cabbage goes well with meats! But I don't like to eat it alone. Hm.

FN: I feel lucky that I don't live near any of these awesome dessert places...because I'd go too often and possibly getting sick of them in the process! ;_;

Kate: I like ice cream on top of a hot brownie, but brownie chunks in my ice cream..hm. Depends. I think the "hot" part of the brownie is key.

Danny: My mom probably things I'm malnourished (but overfed, harhar). I'm going to refrain from telling her about the days of ramen eating..shhhh...

I sincerely hope you were kidding about being sad! Through your blog, you seem like such a sweet, funny, and clever person! Someone who enjoys life to the fullest. So take care, and keep writing these joyful posts! (I'll get off my soapbox now.)

Lisa: I'm not sure if it's a good thing that I'm so good at portraying myself as sweet, funny, and clever. Cos I don't know if I am. I might be fooling the world...

..I mean, THANK YOU FOR YOUR COMPLIMENTS, EEEK!

It's easier to be clever online since I have more time to think about what I'm saying. Real life boppy is less comprehensible, much more awkward, and generally quieter. :[

Ezra's ramen-eating action-shot is seriously ACE! But that pork looks unbelieveably fatty. What on earth were they feeding those pigs.... ^^

No words can describe how wonderful Fatty Pork is... *eyes flutter* I'm insanely jealous of your ramen!!! I haven't had a nice bowl of ramen in ages....

OMG Now I have to taste MINCA:)
Yummy!:)
My boyfriend and I like there new restaurant on 14th and 3rd Ave.

SuperChomp: I'm not sure I want to know what they were fed. Yaay ignorance!

Miss Tiffie: GO GET SOME RAMEN!!

Ulla: Ah, I haven't been to that one yet. I've heard that Minca is better; let me know what you think!