I'm going to do that thing where I don't do what I said I was going to do. Oops.

The promised list of my favorite vegetarian restaurants is currently taking too long for me to cobble together, so before that happens, I'd like to share an experience I had about a month ago involving a pleasant meal that ended with a mindbogglingly crappy dessert. These things occasionally happen, but you don't expect them to. If you did, you wouldn't order dessert in the first place. And then everything would be happy joy joy.

Unfortunately, a bad dessert cancels out the goodness of the rest of the meal. For me, at least. Mediocre, I could accept; "WTF is this?"-inducing, not so much.

It began and ended at Alta. I had been there once before; it's a nice place, maybe not "oh my freakin' god" good, but good enough that I'd recommend it to other people and want to go back despite it being pricier than what I'm used to. When Tim suggested meeting there for dinner, I was all for it. I brought Nathan, Tim brought his girlfriend Sara, and then there were four...stomachs to share food between. 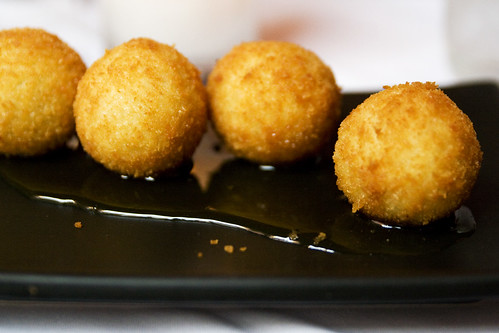 Fried goat cheese. with lavender-infused honey proved, as always, that you cannot go wrong with fried cheese. Or fried anything. The fried-ness didn't bring out any gooey properties—goat cheese doesn't gooify, it just stays soft and creamy—but eating a warm ball of goat cheese with a light, crunchy shell rolled in honey is a lot better than eating a plain ball of goat cheese. 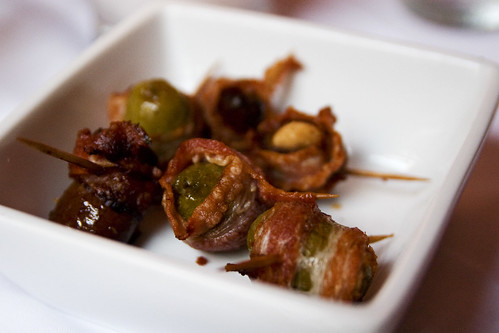 Another favorite was the bacon-wrapped dates and olives stuffed with almonds. Oh. Baby. All the flavors and texture you love in a single bite: saltiness of the crispy bacon, sweetness of the soft, rich date, and nuttiness of the crunchy almond center. Does anyone make a bacon-date-almond sandwich? Because I'd totally eat that. 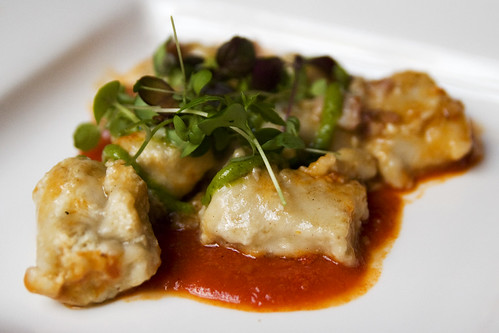 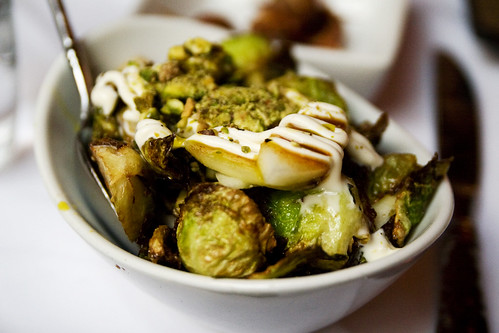 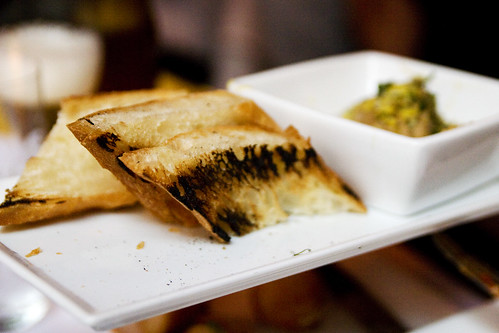 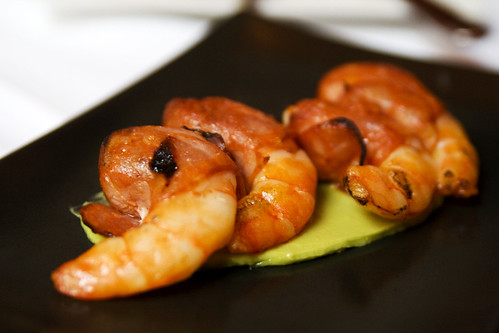 I also like pork inside things, like in these pulled pork empanadas with sweet and spicy cilantro sauce. While diminutive in size, just one bite exploded with juicy porky goodness in a thin, crisp shell. If only it were bigger...if only. Like five times bigger. 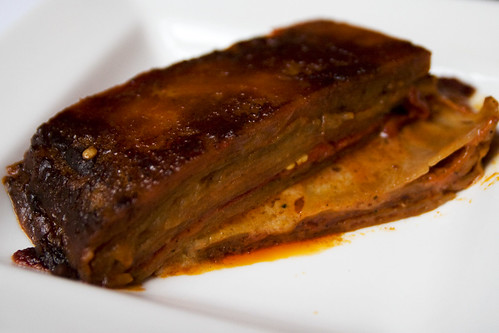 It's potato. I think.

The paprika-potato gratin with oloroso caramelized onions, piquillo pepper, and manchego looked like a slab of meat. It didn't taste like meat though; that would've been odd. It tasted like soft layers of thinly sliced potato, with stuff that sounded more interesting on paper than in practice. Rather disappointing.

And then, there was dessert 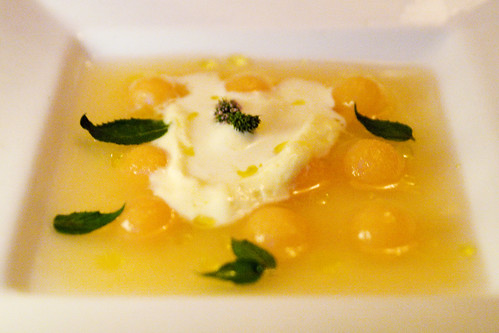 It's too bad that little balls of cantaloupe in some sort of gelée can also look like yellow egg sacs in alien amniotic fluid.

Unfortunately, I didn't write down the name of this dessert and it's not mentioned on their website. I tried calling the restaurant the day after my meal, but couldn't get a hold of anyone on the phone and my dominant characteristic of flaming laziness prevented me from giving it another go. No matter, I remembered enough of the description: cantaloupe and olive oil gelato in some sort of gelée garnished with salt and black mint. Why did it appeal to me? I don't know; in my head it looked more like a parfait, not a plate with flavorless semi-transparent goo and flavorless melon balls with a pool of melted ice cream in the middle. Ice cream that tasted nothing like olive oil, but faintly of sour cream. I'd rather believe that they forgot to put the ice cream in at all than believe that was it. On the bright side, the mint tasted great—it was the only thing on the plate that didn't suck.

Ignoring that this dessert tasted almost like nothing, wouldn't it have made more sense to layer it all in a tall cup of some sort than have it splayed out in a plate? It would've looked nicer, at least.

If anyone's wondering why I didn't send it back, I rarely ever eat anything that's so bad that I think it's worth sending back. Maybe once before in my life, surely less than what I can count on one hand, partially because I'm not that picky, other partially because I might just be lucky. This probably should've been returned, but as none of my table mates suggested it, I know I'm not alone in my inability to form the idea of sending something back. 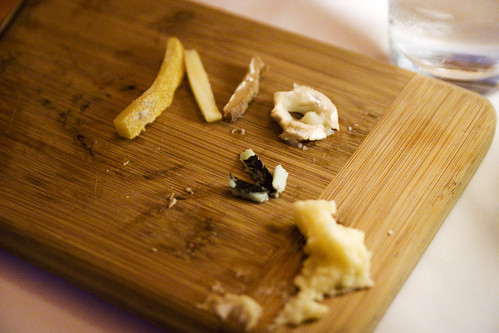 There was another objectionable part of our dessert, but just a tiny part. The right-most cheese in Tim's Spanish cheese platter (the splodge that the NO arrow is pointing to) tasted quite bitter and faintly fruity, like fermented pineapple (not that I've ever eaten fermented pineapple, just if I had to guess). Very old fermented pineapple. Which surely appeals to someone. Except anyone sitting at our table. I'm just going to assume it pairs well with something.

Alta is worth eating at. As long as you don't get the dessert I ate. Hopefully it doesn't even exist anymore.

Yeah - I think they excel in the small fried things department, not so much in the desserts. I can also endorse the cocktails, which so often help mediocre meals become awesome through drunkenness. There are a loads of other tapas places within a few blocks which I'll have to try...

All of the dishes look great (after having just read your vegan-fail entry I'm faintly wondering why some of those dishes couldn't be more like some of these non-meat items...) The sprouts, apple and pistachio particularly appeals. Was the aubergine dip not very impressive? Aubergine is usually so reliably fab.

I once bought a dessert packet from a South East Asian supermarket that resembled your dessert. It was purportedly "mango" flavour. All I can say is that it looked like wallpaper paste, and tasted (probably) the same.

OH EM GEE
give me all of that food. Those cheese balls, bacon olives, and empanadas look outstandingly awesome.

I couldn't agree more. I had dinner there about a month ago and while the meal was 'aight...the dessert completely took the entire meal down the drain. My friends and I ordered the "rice crispie fondue" or something.

How hard can you mess up rice crispies? You melt butter, marshmallows and pour in the cereal.

I don't know what they did, but we got thin "slices" of what tasted like stale rice cakes that were shaved into triangular disks.

We also got the cheese plate and we also had that blob on the plate with no explaination of what cheese was what. The soft blob my friend actually thought was butter! But, we decided it couldn't be butter b/c why would anyone eat butter with their cheese plate?

As another girl who eats everything I'm very much enjoying your blog (which I only recently discovered, since I've apparently lived in a box which did not have blogosphere access for the past decade). Anyway, just wanted to say that this post in particular made me drool (almost literally), until the part about the olive oil egg sacs, which made me slightly nauseous. But an excellent visual description nonetheless. I'll put Alta on my list, and keep the egg sacs off it.

I work for a university and we have receptions all the time. The only ones worth going to? The ones with bacon-wrapped dates (with almonds of course). mmmmmmmyummmmmm::drool:: dang it, now I'm hungry.

Alta is a place I recommend to people as well. Most of their desserts are only so-so at best. http://feistyfoodie.blogspot.com/search?q=alta

beautiful photos. i'm sorry that your dessert was gross, what were they thinking, cantaloupe olive oil gelato? was it suppose to be a new-age take on prosciutto-melon?

oh noes!!!! when i had it, i remember that dessert looking VERY different and in a bowl, not a.... square. So strange! And the gelato was not like otto's but reasonably tasty. Sorry yours was so blah! also wasn't much a fan of the cheese plate and would rather eat those brussel sprouts all the live long day.

Haha, when I went to Alta we ordered almost the same exact dishes (plus a few more, since we had one more person). And yah, that cantaloupe soup was not good. Bad dessert doesn't ruin meals for me, but I was surprised.

Potato thing looks delicious, dessert looks bizarre. Not only that, it doesn't even seem to fit with the theme of the rest of the meal! Sounds like it might be time to hire a new dessert guy (or maybe the problem is that they don't have one...)

When I was in college, I remember going to an art gallery and eating a bacon-wrapped date. Then it occurred to me that every time I'd had pork and fruit, it had been pretty awesome. I embarrassed my friends for a good half hour after that, ranting about pork and fruit.

A bad dessert is so heart breaking. It's like the scene in "Father of the Bride" when Steve Martin's character is trying to go say goodbye to his daughter and he can't catch her in time. It feels like fail and sorrow.

Tim: I am a big fan of the "small fried things department." If you find other good tapas restaurants, let me know!

Superchomp: The eggplant dip was ok..not bad...I think I'd rather eat whole eggplant though. :)

Carl: Everything except the dessert. BRING ON DA CHEESE BALLS!

HelloGirl: Ohh we got the rice crispies too! ...Yeah they were underwhelming. I didn't even feel like mentioning them. AND THEY'RE RICE CRISPIES, how can you screw those up?

Ahh yeah it was buttery...a buttery cheese blob...from the depths of HELLL!

thesassykathy: Thanks for reading! I like making people drool, and then feel nauseous.

Doug: I can totally imagine you saying that. It's great. Hehehe.

Coco: You have bacon-wrapped almond-filled dates at your university? Daaamn.

Yvo: Failed desserts make me sad when they're among very tasty things.

ila: I dunno what they were thinking. Maybe, "Let's see who actually orders this messed up dessert!" :(

Janet: Yours came in a BOWL? What..happened to mine? I suppose your ice cream hadn't melted either. Baah I need to go back to Otto.

soopling: After the meal all I could think about was MELON GOOOO. I wish I could've just focused on the brussels sprouts.

Boots in the Oven: Yeah, doesn't seem like they have a dessert guy. Why have all that other good food with blech desserts? :(

Fail and sorrow! Yes. :( I haven't seen Father of the Bride in foreveerrr. NOW I WANT!

Hmm.. I think I'd prefer cooking dinner myself as opposed to spending money here. Besides the fact that the dessert is frightening, that potato gratin looks like dog food. Thanks for the warning, Ro :P

Aw, bad desserts make me cry. Anyway, beautiful photos! Do you use an off-camera flash? Or does that restaurant just have awesome lighting for food? Which makes sense if they want their food to look appealing for customers...hm..

Haha...I saw the dessert and before I read on, I thought you were eating raw eggs for dessert...and I was like...wha?!

But...fried goodness...mmmmmmmmmm...I really want some cheese now. But only if it's fried:)

Steph: Dog food..ahh, that was it.

Kate: Fried cheese always wins! A dish that looks like egg yolks, not so much.

Alien amniotic fluid, LOL! The rest of the food looks pretty interesting, but I do have to say that the dessert looks odd.

Heya! These are some of your best photos yet, I'd say. And you always take excellent photos.

Christina: And it tastes about as good as it looks.

Half Obscurity: Thanks! Even photos of bad desserts.

Take the strange mad-scientist dessert out of that meal and... I WANT IT! GNOCCI! FRIED GOAT CHEESE! BRUSSELS SPROUTS! EMPANADAS! FOOOOOOOODDDDD!!!!!!!!!!!!!!