For an overview of my trip to Berlin that took place from April 5 to 12, check out this introductory post. I'm a total noob when it comes to Berlin and German history, and all German translations I've presented are done with Google Translate; if I've written anything that's wrong, please let me know! 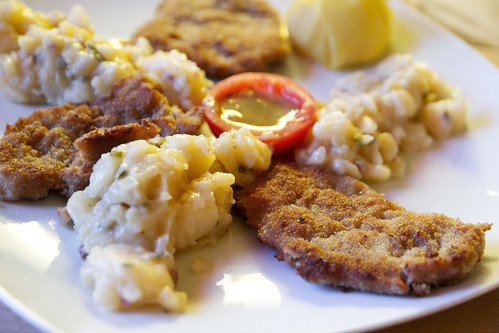 "Do you need any help finding your way?" asked our Sachsenhausen guide Paul as he walked down the aisle of the train car, making sure the members of his tour group knew how to get to their final destinations. "It's easy, just a straight shot to the center."

[BZZT] Wrong. We thought we were good. But in the land of BVG service advisories, especially on a weekend holiday (it was Easter Sunday), you can't be sure. In this case, we thought getting to Greifswalder station—near the restaurant I picked for dinner—would be easy, until we found out after one two um, three transfers later there was no train service to that station. Because that's how long it took for us to look at one of the service advisory boards on the platforms.

IN CONCLUSION: Pay close attention to service advisories. They might mess with ya.

But instead of shaking my fist at the BVG gods, I'll thank them. If we had actually been able to get to my first choice for dinner, we wouldn't have gone to my backup, Schnitzelei. Overall it was one of the best meals of the week, thanks to a combination of a warm and friendly atmosphere and, you know, fried meat cutlets. 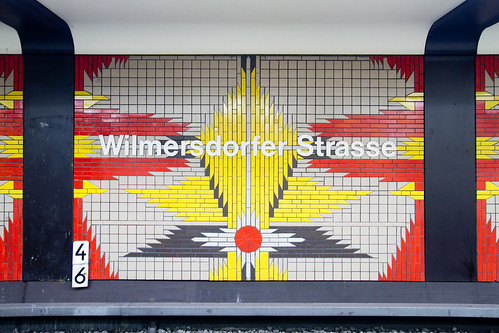 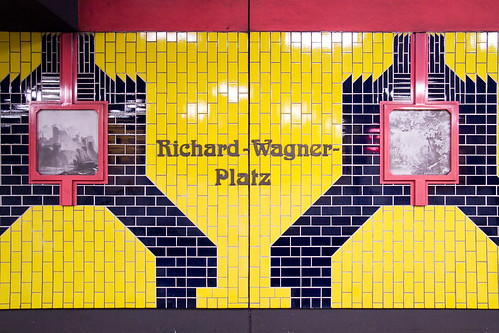 Another plus of going to Schnitzelei was adding these two amazing U-bahn station designs to my photo collection. They don't make 'em like this at home. 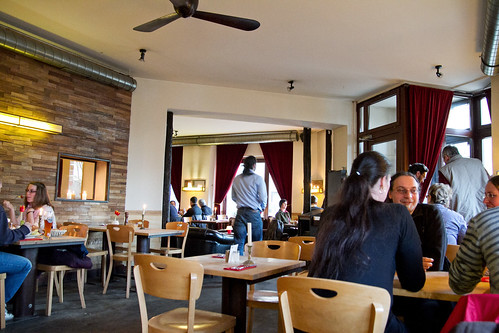 We were asked if we had a reservation—nope—but we had no problem getting a table, I'm guessing because we arrived on the early side of dinner at 7 p.m. It was more crowded by the time we left. 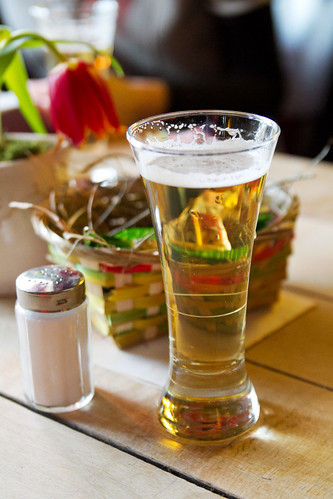 Schnitzelei welcomes you with a complementary glass of beer. Although I've encountered complementary drinks at restaurants a weeny handful of times in my life, I don't think beer was ever one of them. It's a nice touch that would please most people...aside from me since I don't drink beer. But it's the thought that counts. 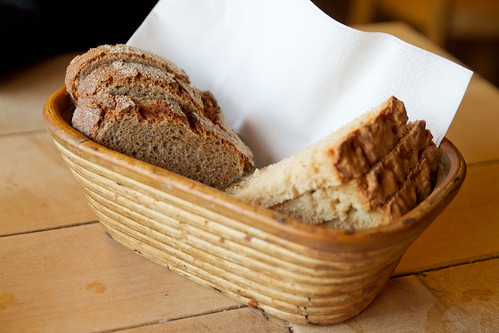 Also complementary was a bread basket featuring beer bread and beer-less bread (not the official name; I just don't recall what it was). While the latter bread was fine, the beer bread was the winner. 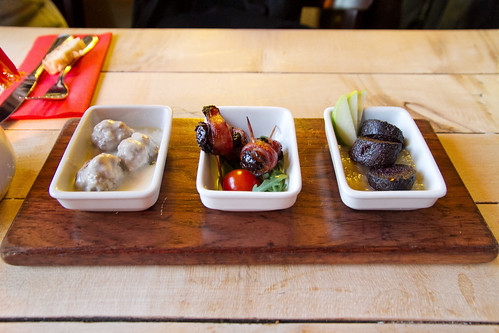 Schnitzelei's "German Tapas" menu features 15 items that can be ordered in groups of three, six, or nine. Following the pricing structure, 15 items should cost €19.50 (someone must've done that before), which would make for a pretty fun and economical 15-dish meal.

But I also wanted to eat schnitzel—it's in the restaurant's name and all—and I didn't want to throw up while doing so, so I just went with three dishes for €6. 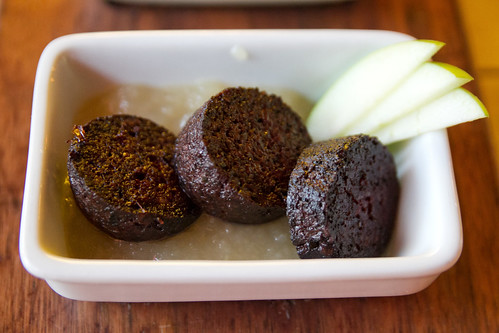 Blood sausage—with its pudding-like texture of blood and fat, creamy in the center and crispy when browned in fat—is well worth the trouble if you can procure fresh blood.

That's some classic Cheech. I can picture her saying that sentence in an chirpy tone, face aglow with a wide smile as she heaves up a huge bucket of blood with her skinny arms.

Blood sausage doesn't really taste like blood, but as Chichi says, it has a slightly liverish flavor. Among other flavors. Complex ones. Not funky-complex, but...something-else-complex. Yeah. I'm moving on now. (Actually, I've got one last thing to share about blood pudding: this very amusing post from an American student eating blood pudding in Sweden for the first time.) 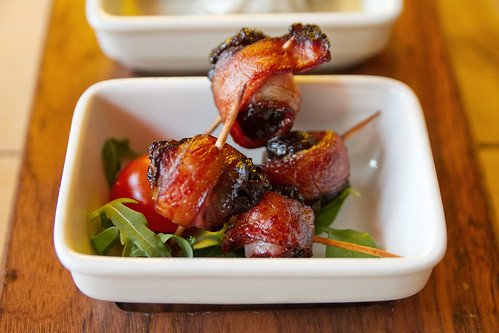 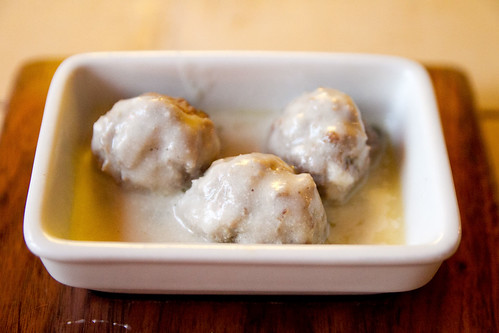 Königsberger Klopse are veal (or pork or beef) meatballs topped with a creamy caper sauce. It's named after its birthplace, the Prussian city of Königsberg (named Kalingrad since the end of WWII and now a part of Russia; also home to this notably fugly building). I'm not sure what kind of meat Schnitzelei used in their meatballs, but whatever they did, the meatballs tasted like 150 percent meat, if that makes any sense. Like super meaty meat2. That's a good meat lump. I'm mildly tempted to try making them at home but, ahh, mmm, eehhh, then I remember the "expenditure of effort" thing. 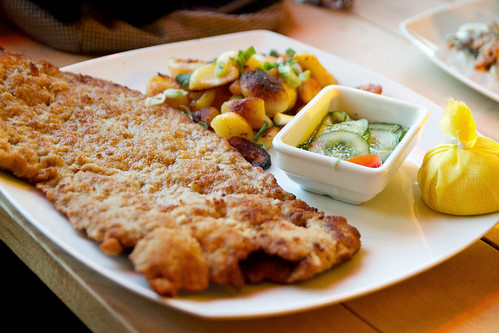 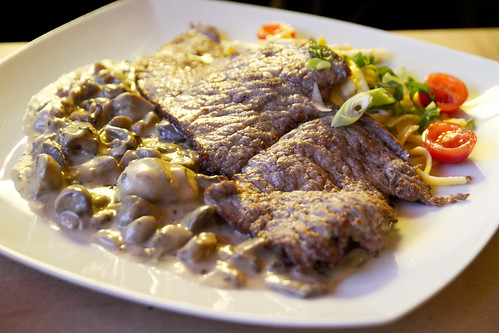 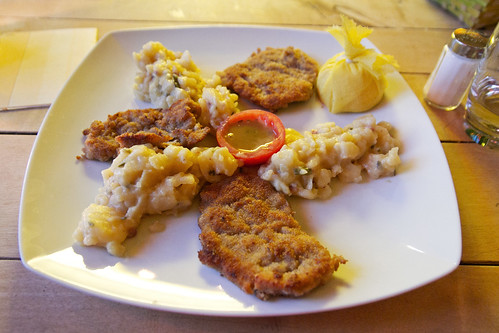 My Bavarian Schnitzel (€14.50) featured thin pork cutlets marinated in sweet mustard and horseradish, breaded and fried, with warm, bacon-enhanced potato salad on the side. I'm not sure I tasted much of the sweet mustard/horseradish thing, but as I mentioned in my first post, my sense of smell, and thus taste, was dysfunctional for most of the trip. At least fried meat tastes good even when you can't...taste it well. The potato salad, like all the potato salad I ate during my trip, reminded me that I ought to eat more potato salad. It's creamy! And potato-y! And...that's all I've got. 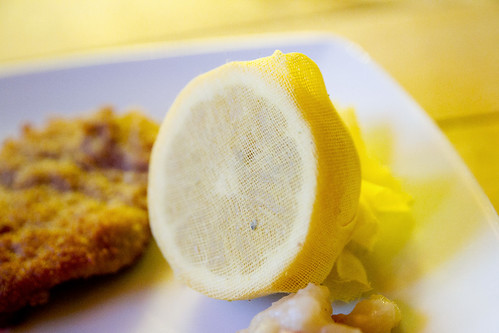 Lemon halve with a lemon cap.

I liked that my lemon halve came wrapped in a special net so I could squeeze with abandon, channeling a newfound fearlessness that could only come from the security of knowing I've evaded the dreaded rogue-lemon-seed-on-food. Seriously though, it's a nice touch. It says, "I care more about the purity of your freshly squeezed lemon juice than most other restaurants. They don't give a shit. We give all the shits!"

If it's not apparent from the photos, the portion size was huge. Granted, it does cost about $18. Unless something is wrong with your stomach (...do get that checked out), you will get full. Considering I also ate an appetizer, my fullness came quickly.

Unfortunately, the main reason I stopped eating wasn't because of discomfort in my belly, but because of discomfort in my lung-al area. I'm not sure if it was due to the appetizers or the schnitzel, but I'm guessing it was a symptom of acid reflux, not an allergic reaction to food. ...I'm not 100 percent sure though. OH WELL, AT LEAST I'M NOT DEAD. Since I was pretty full, I didn't feel so bad about my mildly labored breathing ending my meal.

And so I watched in silence (with a hint of wheezing) Kåre and Diana as they tucked into four different desserts. NOOOO... 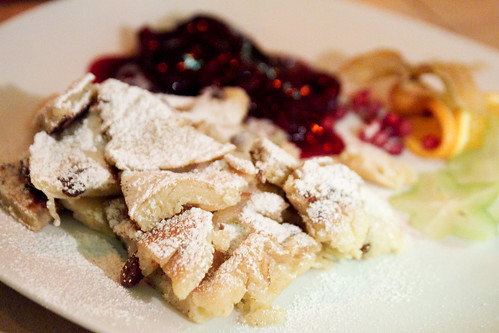 ...Actually, by the time they were winding down, my breathing normalized enough that I felt more comfortable eating a bit of each dessert. And thus I was introduced to the famous Austrian dessert Kaiserschmarrn (€5.50). The name literally translates to something like "emperor's nonsense," but "schmarrn" in the culinary sense is the name for torn pancakes/omelets (as far as I can tell from the Internet). I found at least two stories on the origin of the dessert; either way, it's attributed to Franz Joseph I, emperor of Austria from 1848 to 1916. Good job, Franz.

The menu describes the dish simply as "chipped pancakes with plums." Irregular chunks of raisin-studded pancake dusted with confectioners sugar came with traditional plum compote and a less traditional mini decorative fruit medley (featuring pomegranate seeds, starfruit, thinly sliced orange, and a cape gooseberry) on the side. It's a great idea for a dessert: eggy pancakes, pre-chunked for more successful crispy bits (at least, that's what I'd want if I were making them...and make them, I should) and ease of stuffing-into-eating-hole. Schnitzelei's may not be the best iteration, but you can't go wrong with a formula like that. 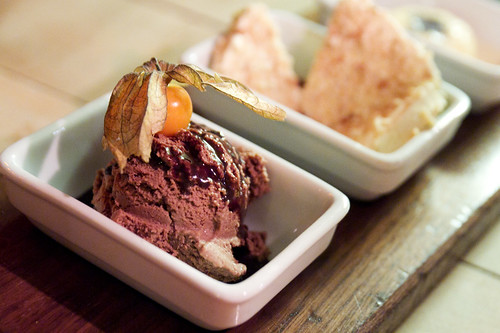 I only ate a little bit of the other desserts, part of the three-dish dessert tapas (€6.50). Here's chocolate mousse. 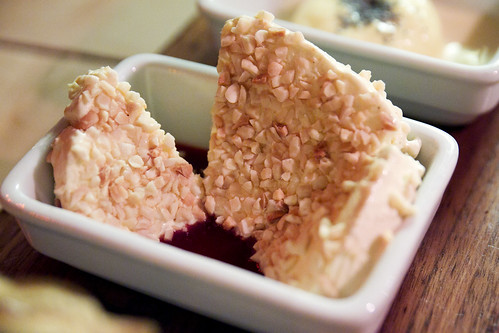 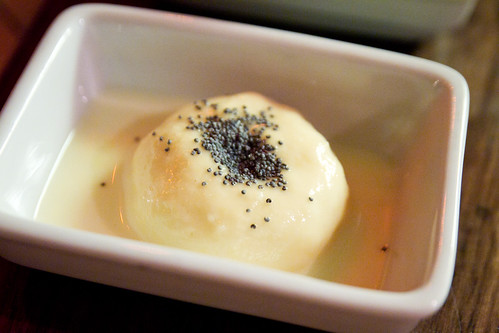 And a marillenknödel, Austrian apricot dumpling, topped with poppy seeds and vanilla sauce. I only took a nibble (I don't even remember the apricot center, oops); judging from the mildly chewy texture I'd guess it was made with potatoes. I can't say I was into this version, but I'd try it again if I ever see it at another restaurant. 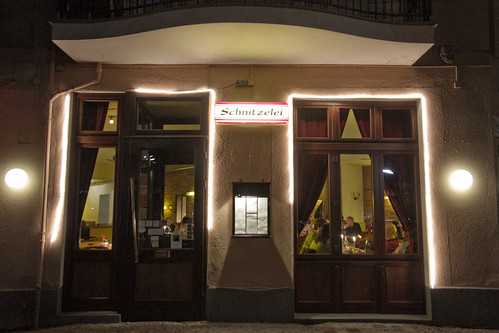 I recommend going to Schnitzelei if you're in the area—or even if you're not in the area—and you want to try a bunch of German/Austrian dishes in one go. The food is good and fairly priced, the service is especially friendly, and the ambiance is pleasant inside and out (the restaurant is right next to the Spree River and in nice weather, you could sit outside).

Many thanks to the anonymous reader who left me the recommendation! 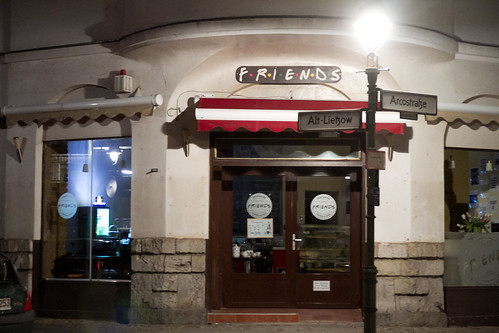 On the way back to the metro station, we couldn't help but pause at this cafe. 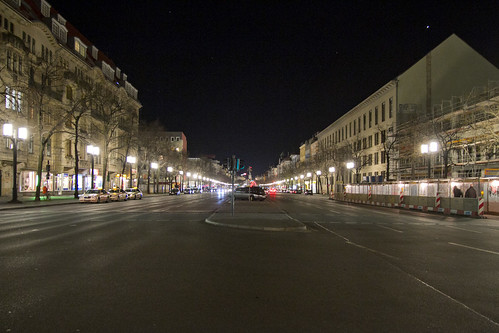 Another huge street, whatever.

Just because I took a photo of it, here's a mega-wide street—eight lanes, methinks. But that seemed pretty normal in Berlin. Huge-ass streets and loads of sidewalk area. 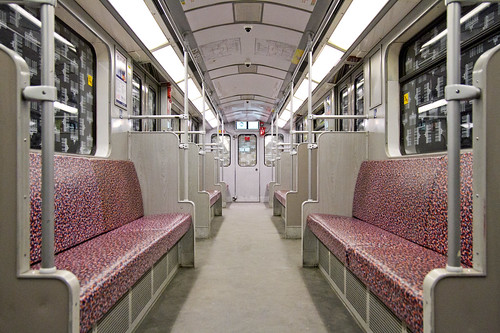 At some point on the way back to the hotel, Kåre and I ended up in an empty train car, the only time that happened during the trip. This would've been a prime opportunity for a photoshoot with Giant Manatee—if only Giant Manatee would've fit in my suitcase. 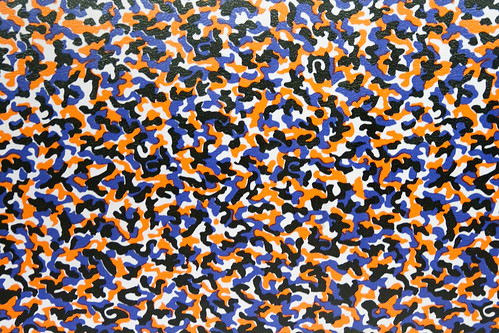 I did take a photo of this crazy seat pattern, though. Just layer those orange splodges on those purple splodges on those black splodges. No one will ever notice stains on the seats again because if they stare at the seat long enough their brains will self-liquefy and they won't be able to see because they will be dead. 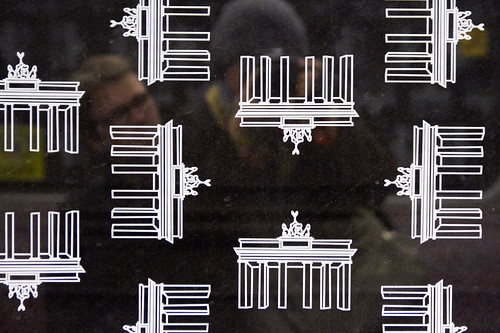 The windows are patterned in a less eye-rubbing-inducing fashion with Brandenberg Gates. They made the image accessible to not just those who can see upright, but also those who can only see the world turned 90° clockwise, 90° counterclockwise, and upside-down. Nifty.

Dear God, I remember when I was in Berlin and I saw the tacky metro cushion design (and the window patterns that blocked clear view of the stop). It was a grim sight but I also recall NEVER paying for any public transport (I am so beyond fares), so that was pretty great about Berlin.

Sabrina: The window design seemed a bit excessive. But crazy tacky cushion designs have a special place in mah heart. The place that wonders who designs such things...and...how...

How have I gone all my life and have never known kaiserschmarrn??!

I am one deprived puppy.