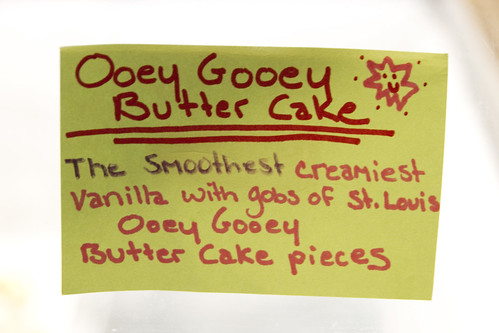 OGBC, don't ever leave me. Unfortunately I don't have a photo of the actual ice cream.

Imagine a pen of a dozen playful kittens. Magical kittens made of marshmallows, with delicately velvety fur covering their cushiony, sugar-scented skin. Now, imagine you're lying in this pool of warm kittens. (If you're allergic to cats, also imagine that you're not allergic to cats. And if you don't like cats, imagine that you like cats.) You're surrounded by tender feline fluffballs hobbling over your torso with their nubbin paws and legs, gently licking your face with their wee tongues, overall just cuddling the shizz out of you, resulting in paroxysms of giggles, or permanent happy Tom Haverford face, or a bit of both.

The recipe for this sunshine: butter-enriched yellow cake mix baked with a top layer of cream cheese mixed with eggs, butter, sugar, and vanilla extract. More ambitious bakers can make it from scratch, but it seems most people go with the cake mix + cream cheese method, recipes of which are all over the interwubs. Although Paula Deen's recipe may be the top Google hit for "ooey gooey butter cake" and earn the disdain of serious eaters who prefer to distance themselves from the Deen name, keep in mind that it's not her creation (although it sounds like it has all the components of a perfect Dean recipe); the dessert was invented in St. Louis in the 1940s.

The cake can't take all the credit; the ice cream is plenty kitten-joy-filled too. As the sign declared, the vanilla ice cream was exceptionally smooth and creamy, with the bonus of unintentionally bearing a marshmallow-like flavor and texture. Or maybe the texture turned out fluffier than normal because I ate it after the pint had been sitting in Eric's* cooler pouch for an hour**. ...I'm not sure. What I do know is that it tasted far better than regular vanilla, and that combined with chunks of ooey gooey butter cake turned me into this:

I still don't know how to draw humans.

Actually, you have to dial up the crazy of that blob by 10x for a more accurate depiction. I do believe the ice cream-eating session went at least 90 percent like this:

Me: [shovels a spoonful into mouth] Oh...oh god, why is this so good?

[Wait as other friends try the ice cream; five of us were sharing a pint. And two spoons. Don't ask.]

Me: [shovels another spoonful unto mouth] Ohhh gaaaawd ahhh ahh this cake is so good...

[Wait some more as the others dig in.]

[Wait some more. Wonder why friends' reactions to the ice cream aren't as intense as mine. Realize this ice cream does to me what alcohol does to normal people. Goes into crazy babbly mode.]

Me: [shovels more] WHAT THE HELL, WHY IS IT SO GOOD. ...WHAT, YOU GUYS DON'T WANT MORE? LIKE HELL I'M LETTING THIS ICE CREAM GO TO WASTE. I CAN EAT THE REST. [shovels more]

I ate maybe a third to half of the pint, very much flouting that healthy diet thing I'm trying to stick to. And not a single fuck was given that day.

* Full disclosure: Eric is Ample Hills' general manager. Not that he was trying to win me over with free ice cream. ...Although that is a very good way to win me over. I mean. I'd be friends with Eric even if he worked in a sewage treatment plant and smelled of poop.

* In case you're wondering in what godless world would ice cream sit in a cooler pouch uneaten for an hour, it's because Eric toted the ice cream from the shop in Brooklyn to our mouths in Union Square, where were were meeting before seeing Traces. Traces is a fantastic show if you want to witness brain-numbingly awesome feats of human strength, balance, and agility, making you feel like a big ol' bag of useless fat and muscle in the process. The plus side? You get to indulge in the joy of cake bits mixed with ice cream. Because your body's not worth saving. ...Juuuuuust kidding. You should see Traces, and do what we did, which was buy day-of, front-row rush tickets at the box office at 6 p.m. for only $25 each.

I saw Paula on that first recipe link and reflexively thought, "This is the worst thing I can eat, and the best."

I could've sworn I saw a OGBC ice cream recipe in Jeni's Splendid Ice Creams at Home, but I'm not sure. Either way, it's a great idea that I hope to bring into my home very, very soon. Ice cream is my favorite food, so yeah, I'm with you through the entire last section of your post.

Hi! Long time reader, first time commenter here. That icecream sounds absolutely amazing, and I've had no appetite all day. :( I wish I lived in the US, right now all I have is back pain and a puppy that pees everywhere.

I'll trade for a scoop of that delicious icecream! And I'm the same with icecream too, I'll happily eat a whole pot full without even realising, just slurping away at pieces of cookie dough, or caramel, or marshmallow, or...

I hate when I accidentally double post--sorry about that! Also, thanks for the link to whatscookingamerica.net--yay for history! This time, I shall post once and not reload the "post a comment" page.

Julie: I think many Serious Eaters may dismiss the recipe based on the Deen name alone...which would suck because THE CAKE IS DELICIOUS, as you can tell. I'm going to rejigger the description to explain it's not a Deen original recipe.

And no probs on double post; I'll delete the other comment. My site is wonky, but I don't know how to fix it. :(

Chezuu: Aw, puppy...so cute, but so not bladder-controlled. Perhaps you can try to make this ice cream at home!

Ah I loooove kittens, and I totally love the way you described OGBC ice cream. Why didn't I try this during all of my 4 years in NYC...what was I doing?!! I'll give it two days...if the thought of this ice cream haunts me for 2 days consecutively, then I'll give into Paula's recipe and make some at home.
Make that 1 day, 1 consecutive day of OGBC ice cream ghosts in my mind and I'm a victim in Paula's buttery hands.

So we CAN'T get this in St. Louis. Major sad face.

I just had Turkish ice cream (dondurma) in Istanbul .. It's made with this gooey thing called sahlep in the middle. I highly recommend finding it if possible in Berlin :)

I Live in a Frying Pan: Ample Hills just opened last summer, I think, so I'm guessing you didn't try it because you couldn't travel into the future. It happens! Did you give in to the cake? :)

Margy: But you can get the cake pretty easily, I hope? In which case...get some vanilla ice cream and MASH EM UP! Mmm.

Sabrina: I tried Turkish ice cream once when I went to Seoul; tasty, yeah! I'd love to try it in Turkey someday. But if I see it in Berlin I'll eat it there too, hehe.

I miss Ample Hills so much and hope they have this flavor when I visit next. And Traces is awesome!

Gooey Butter is seldom a dessert. When I lived in St. Louis we had it for breakfast many Sundays. I don't know anyone who had it as a dessert!

The ice cream version sounds wonderful. I have made this childhood favorite in the past and I love to make ice cream so I may just try it.

BTW, many St. Louis bakeries get a mix from somewhere. It comes in large bangs so many bakeries have very similar Gooey Butter. My favorite was from the now-long-closed Ferguson Bakery.

Jessica: They ought to keep the ooey gooey buttercake flavor foreverrr. Hope you get to eat it again soon!

John: Damn, what an awesome breakfast! (throws away donuts and muffins) You should totally try to make the ice cream.