This entry originally took place on April 21, with part one here. It's not a very food-filled post, but it's got...NATURE...and things. But mostly nature. Check out other posts about Iceland for more food stuff. 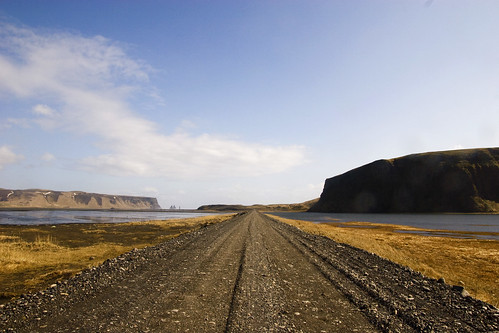 On the road between Dyrhólaey and the main road that lead to more vast expanses of rocks, grass, waterfalls, and other natural things, we stopped on this road.

And got out of the car.

To the other side of the car was this. MOUNTAINS! And damp soil goo. 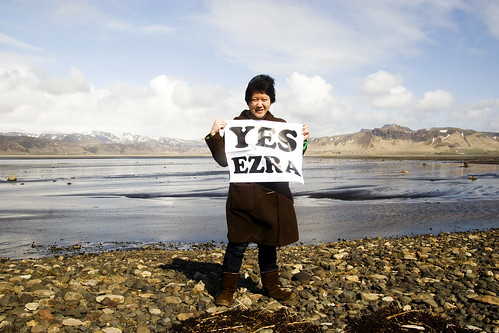 I took this opportunity to say YES EZRA! 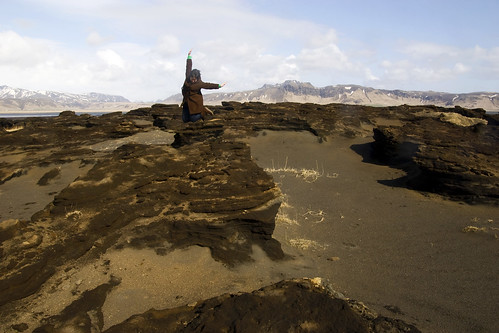 Further down the road was a field of stubby stratified rock formations surrounded by damp soil. Perhaps it was once all rock that, over a gazillion years, eroded to the funky masses they are today. Or not. 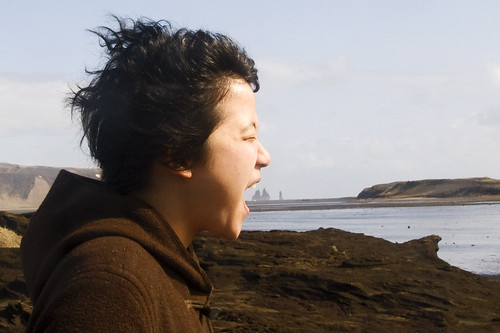 Eating had yet to occur. Doh. 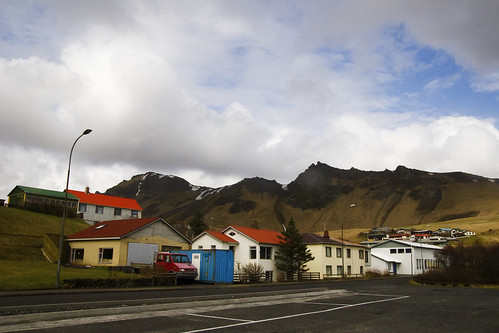 ...Until we got to Vik and stopped into a supermarket for some meat, crisp bread, and cheese. Does a body good! Not really. 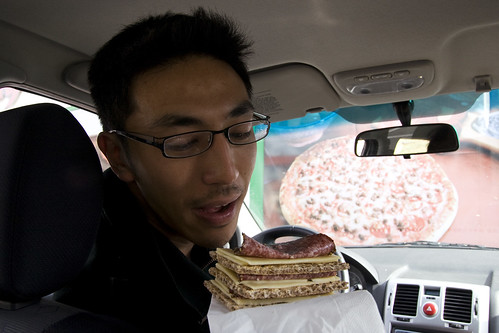 The Pizza God looks over you.

Greg made a triple decker meat-cheese-crisp bread sandwich of some sort with surprisingly tasty sesame-speckled Burger crisp bread. Light, crispy, and flavorful, it actually gave me crisp bread cravings when I got back home. Alas, I haven't found the same brand here and when I tried a different one, it wasn't nearly as delicious (mostly, it was bland-ariffic). I am a sad panda. 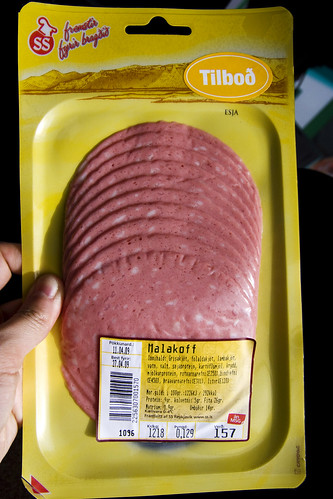 Maybe someone can explain this to me. Here's a pack of bologna from the front... 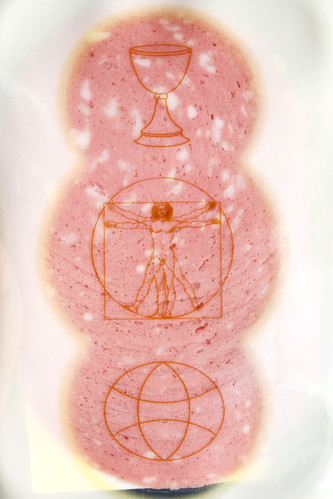 ...And there's the back. Rather atful for a package of processed meat. I can recognize Da Vinci, but the other images escape me. Halp? 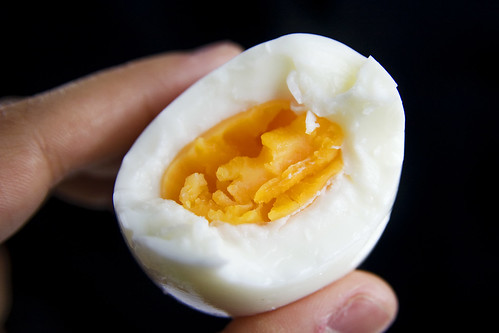 We also hard boiled some eggs that morning to bring with us on the trip. These eggs were a rather deep orange-yellow color, rich, and tasty. (Hard boiled is my favorite form of egg.)

Back on the road.

And the desolate road continued as we went to our next waterfall. 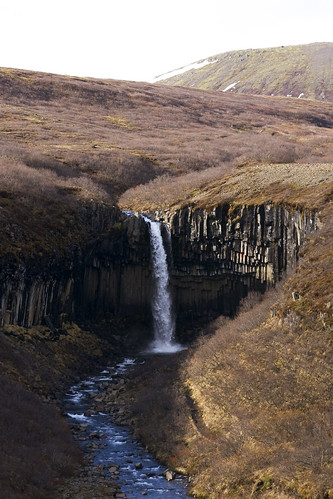 The path to Svartifoss.

Unlike the other waterfalls we had visited that day, Svartifoss in Skaftafell National Park is not located right off the road, but it's a fairly short (less than 20 minutes), unthreatening walk to get there. (I figure this is worth noting if you're as terribly out of shape as I am. Whenever I have to deal with steep paths my body goes into, "Fuck fuck fuck I feel like crap" mode, but it's unlikely I'll actually say anything while huffing and puffing because...I am too busy huffing and puffing.) You can see the path on the side of the stream in the photo. 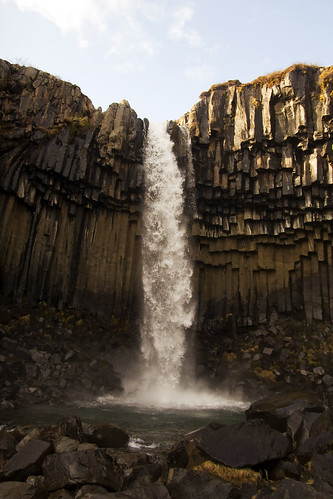 The name Svartifoss, or Black Fall, comes from the dark basalt columns that formed from cooling lava. I just searched for more information concerning how columnar basalt develops, but if I try to fully understand the science now I will never finish this post. (You'd wonder why it takes so long to write a post. I'd attribute most hold-ups to getting distracted by the Internet, but sometimes it's because I'm trying to quickly research something I don't know much about. Which is most things.) 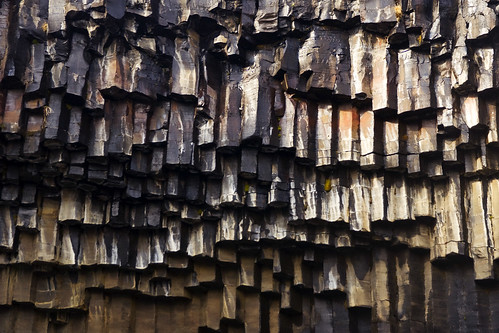 I'm mildly fascinated by naturally emerging patterns in unexpected places. If I had to choose between going to a beautiful beach or looking at rock columns, I'd rather do the latter. NATURE IS AWESOME. Don't you forget it.

Greg shot this video of the fall in action.

The final destination was close. So very close. Just over that hill, actually. 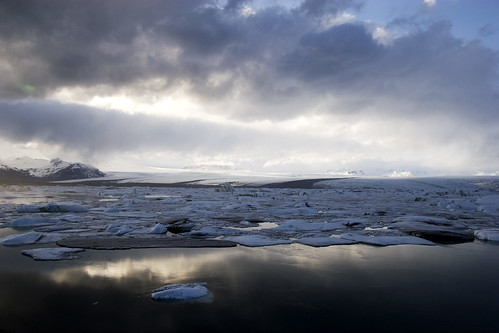 When we finally reached Jökulsárlón, the largest glacier lake in Iceland, the sky was unfortunately blanketed by clouds. Although the sun was still shining brightly at 6:30 p.m., its light barely reached the glaciers. OH GOD, FAIL.

But it was still good. Peaceful and quiet, aside from the soft creaking and trickling sounds of the moving/melting glaciers. Very few other tourists to be seen. Cool, crisp air. Totally surreal. It didn't really hit me at the time that I would probably never get to visit a place like this ever again; I was mostly thinking about how I wanted to sit amongst the grass and rocks for ages while staring at the ice and passing seals. I also wanted to climb on a glacier, but that would have required a boat and I'd assume that "glacier climbing" is prohibited.

I did touch a chunk of wayward ice that came to the shore, possible another prohibited act, but I was just trying to send it back to its friends. YEAAAAH! If you think my writing is less-than-stellar, you should hear me talk. It's much more painful. Watch this video shot by Diana at your own risk...of thinking less of me. 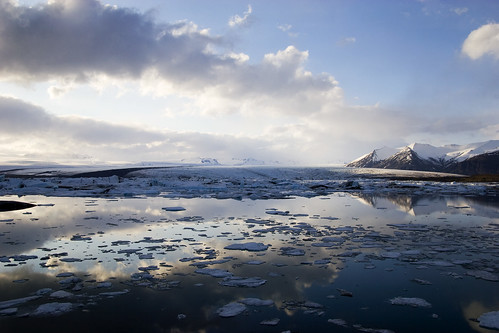 I really wanted the clouds to follow my commands (that is, "MOVE"), but no dice. 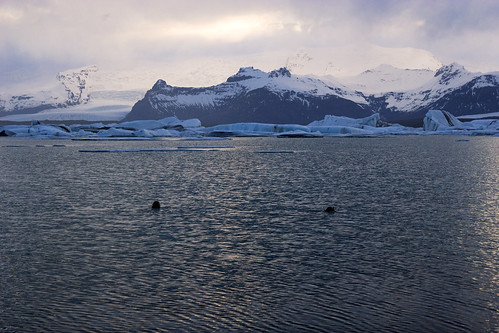 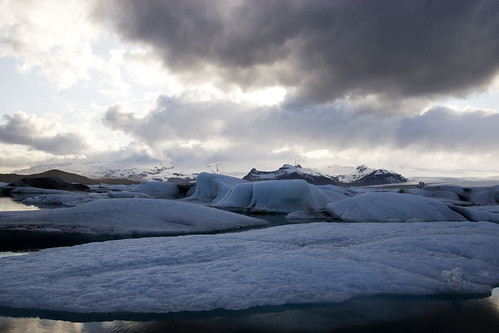 Some of the glaciers had black marks, or zebra stripes as Diana called them. 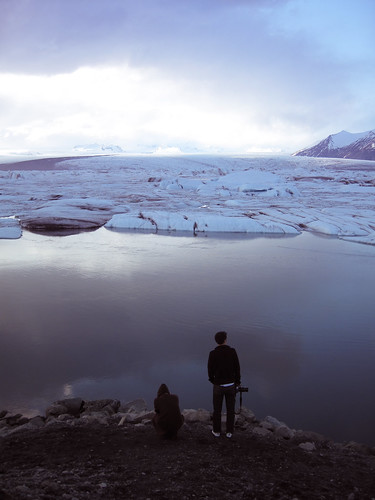 You can see more of the stripey action in this photo by Diana. 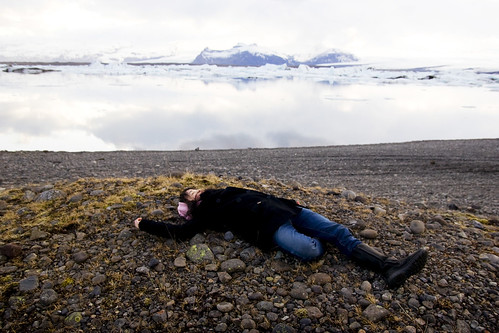 And there's Diana!...dead. I mean asleep. I mean pretending to be one or the other. 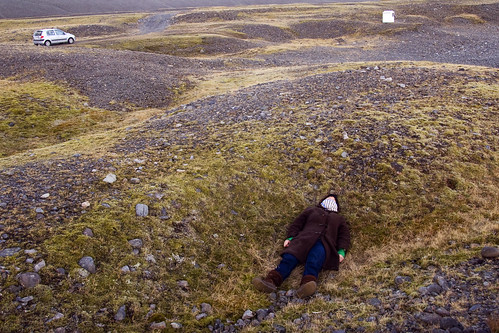 For some reason one of my goals for the trip was to have a "sleepy/dead" photo somewhere in Iceland. AND I GOT IT, in this grassy pit by the lake. (Here's a better version sans car.) 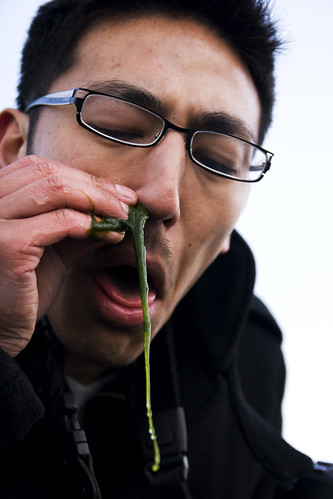 And for the main photo in my album of "Greg Doing Weird Shit," here's Greg pretending to snort out a nose-ful of algae snot. He was pretty excited when he picked up the algae at the edge of the lake and realized it had a strong resemblance to "diseased bodily discharge."

For a better view of the lake from afar, check out this photo by Diana. 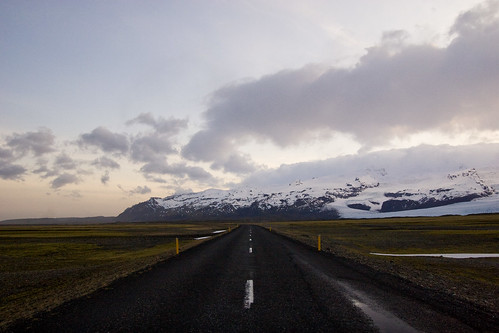 We had to leave at a reasonable time to account for the 4+ hour drive back to Reyjavik. Sigh. Bye-bye, glaciers. 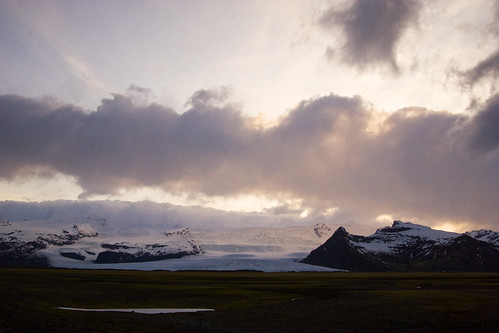 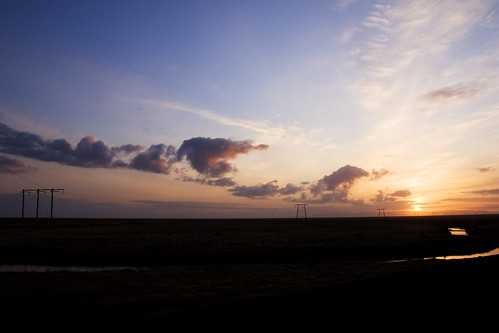 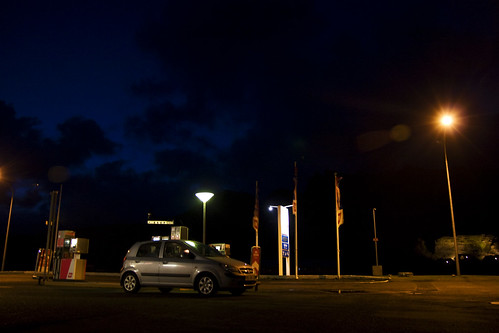 We passed a large chunk of time by playing a game called, "What Popular Movies Has Robyn Not Seen?" Because over the course of the trip it was determined that my movie history was severly deficient, mostly in the "Action" and "Drama" categories. Every time Greg or Diana guessed a popular movie that I hadn't seen and they had, they would get a point—the scores went up to the 30s before they called it quits. What haven't I seen: any Die Hard movie, any James Bond movie, any Robocop movie, any Terminator movie (that I can recall well), aaaand then some. 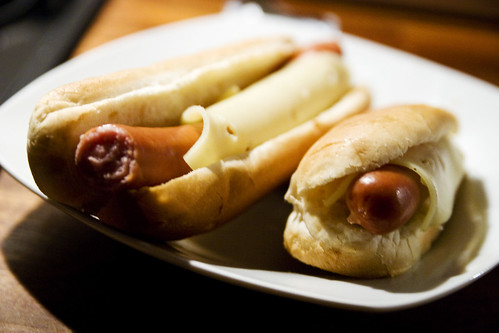 When we got home sometime after midnight, Greg's gurgling belly asked for a snack. I wasn't going to refuse a late night hot dog, although wrapping microwaved dogs in cheese and sticking them in lightly toasted buns may not have been the best recipe for "delicious late night snack." They were missing a few magical ingredients, like sauce and fried onions. Ooops. Well. We did what we could with our limited ingredients.

And that was the end of THE MOST AWESOME DAY I SPENT AROUND NATURE. It wasn't until it was over—more specifically, when I was lying in bed with nothing to concentrate on—that I realized, "Damn that was awesome. That's not going to happen again, ever, is it." But it's probably for the best that it's such a singular experience; if it happened all the time, it wouldn't be as special.

that cup on the sliced meat is probably the Holy Grail?

Which crisp bread is it? There are some in whole foods.

Hardboiled eggs look perfectly cooked, not a ring of green or grey to be seen.

I'm loving the posts about your trip, they have made me giggle *and* learn - always good!

Wow, it's so gorgeous there! I love the little car in the giant glacier-y landscape. And I haven't seen any of those movies, either - action series like that, eh, not so much. Same with over-sequelled horror films.

Oh man, I really hope I get to go there when I'm in Iceland. That looks so special. Everyone should be able to see something like that in their lifetime! Well, almost everyone, at least.

with some delicious nutty cheese and tomatoes that i subbed for greens. but..... BACON. yum.

It's by Burger, which I didn't see at my local Whole Foods. WAARGH? I'll keep my eyes open for it.

Angeline: I think Diana cooked em, so yay for her EGG BOILING TECHNIQUE.

Anna: Ohhhh I don't like horror movies at all either. Hoorah.

Sarah: Yeah! Find someone there who has a car!

might not be much food buts everything is so beautiful

These are phenomenal photos - particularly the scenery. I'm not sure about the snooot one, however...

Melissa: Thanks! You should see Diana's photos, they're really coooooool.

You did such an amazing job at capturing Iceland. You should send these all to the tourism board.
The photo's are gorgeous too!

superb shots. I like "The sun" very much. So cool!.

Wow. I never realised how fantastic columnar basalt was. Mostly because I was not previously aware of its overhanging and yet perfectly chiselled appearance.
Great photos :)

I sympathise with the mainstream movie thing. I haven't seen Gladiator, any Harry Potter movies, The Da Vinci Code, Fight Club... The list goes on. Ehn. I'm not really bothered by it.

Ulla: Thanks! I think most photos taken in Iceland come out awesome. ;D Ye know, just point your camera in the direction of nature and its like WHOA, pretty.

Oh man, I've seen all the movies you mentioned! Although why...well, HP is easy; I love the books. :) I think someone lent me Fight Club (it's goood) and I saw Gladiator with friends...somewhere. I dunno. And I have no idea why I saw the Da Vinci Code; I'm going to assume my mom wanted to see it.

Beautiful pics of Iceland! Hope you found the food attractive as the scenery ;)

Try Wasa, if you feel like knækbrød (crispbread in Danish. Don't know the right name in Icelandic...) You might get it in Ikea, if they also sell Swedish food in Ikea's in the US..

Guy: Scenery was a bit more mindblowing, but it's hard to live up to NATURE!

karmel: It's pretty easy to get Wasa here (in Whole Foods and whatnot); I'll try to find a good flavor!

I'm currently researching Iceland for a Romantic novel I'm writing - your photos and descriptions were just what I was looking for! Thanks so much.