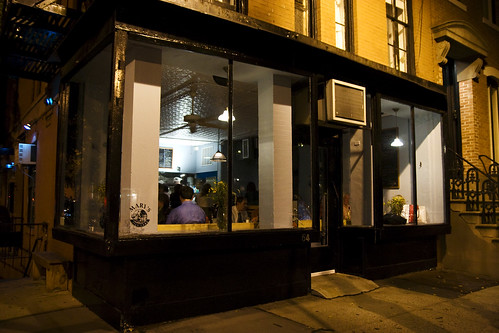 Whenever Kathy and I need to refer to "that time we went to a restaurant that kind of sucked and wasn't worth it," Mary's Fish Camp pops up, usually followed by a short recap about why it sucked—a recap that morphs with every telling like a confusing game of Telephone.

"How much was that lobster roll? Like $30-something? And remember when the waitress's head exploded in a ball of flames because she was a minion of the Underworld? The service was terrible."

It wasn't actually that bad—it just wasn't that good, especially factoring in the high expectations we had for it considering its reputation as a semi-beloved West Village eatery and that it was opened by a former partner of Pearl Oyster Bar, a restaurant that I do recommend. I didn't get to blog about the Mary's experience when I ate there last October with Kathy and Yvo, but I feel like I ought to record it now for posterity's sake, even if it's three months late.

Check out Kathy's and Yvo's posts for more descriptive information. I'm pretty much cribbing from them anyway, but plopping in my photos. 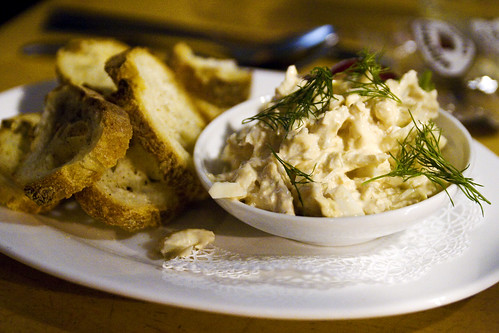 We started with the Louisiana crab dip. There wasn't anything very notable about it. As Yvo said, it wasn't bad, "just blah." I remember the garlic more than the crab, which I don't remember at all. Not worth the calories, which seemed to be the theme of the night. 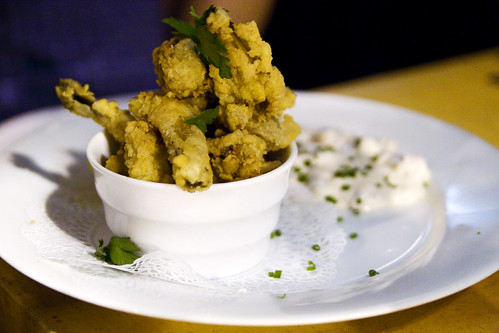 You can't go wrong with fried oysters and clams with tartar sauce, right? Once again, not bad, but not memorable either. Nothing stood out as bad or good. It was just...fried stuff that didn't taste particularly special for coming from a seafood-focused restaurant. 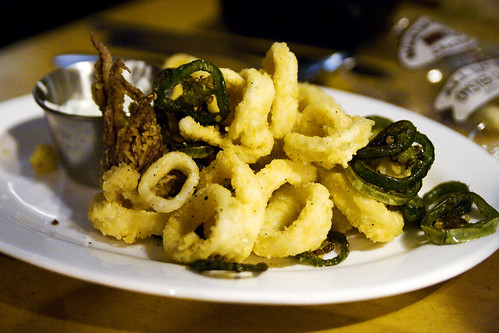 Same for the fried calamari and jalapenos with cilantro sour cream. It wasn't the ethereally tender sort of calamari, nor anything disarmingly chewy. It should've been awesomer. Boppy says so.

The main dish we all wanted at Mary's was the lobster roll, but we found out it was $33, we judiciously decided to split one. And for $33, it was so. Not. Worth. It. Beyond not worth it. The unimpressive amount of lobster didn't burst with sea-flavored, lobster-y goodness, the bun wasn't a toasted wonder soaked in butter, and even the shoestring fries fell flat. The weenie portion just added to the disappointment. Kathy, Yvo, and I could hardly believe that that was it. 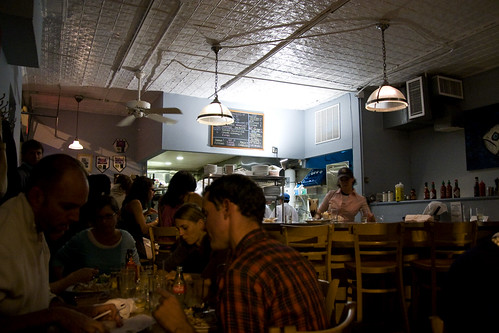 Mary's Fish Camp seems to get mostly good reviews, but I wouldn't recommend it for the price. Go to Pearl Oyster Bar instead. The environment's nicer and it the food tastes better.

Unfortunately, a lot of my foodings skip TGWAE and only appear on Serious Eats. AND THEN YOU MISS THEM! Sadness galore. Here are some of my posts from this month: 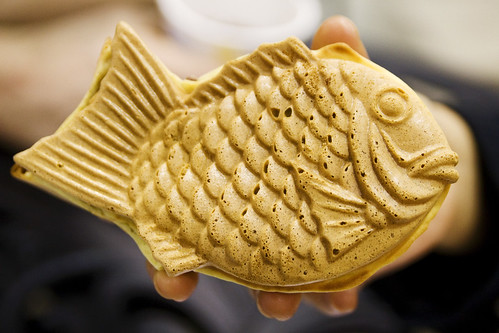 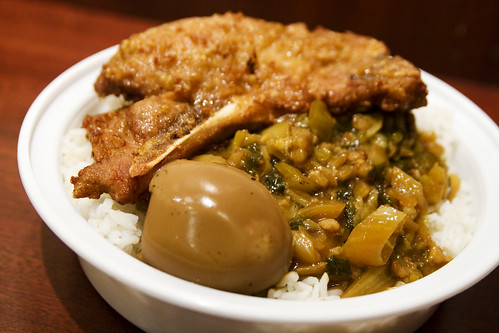 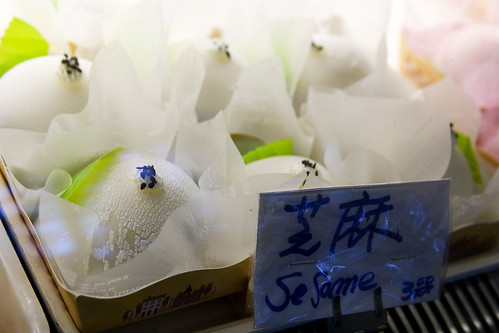 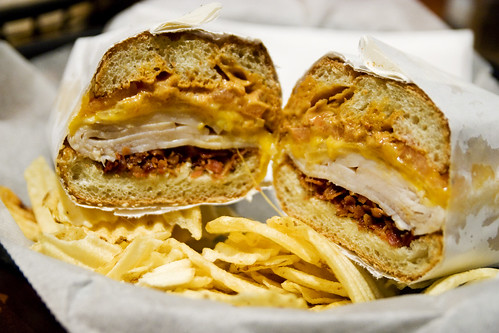 For a Semi-Balanced Meal, Try the Spicy Rizzak and the Veggies of Them All at Tiny's Giant Sandwich Shop 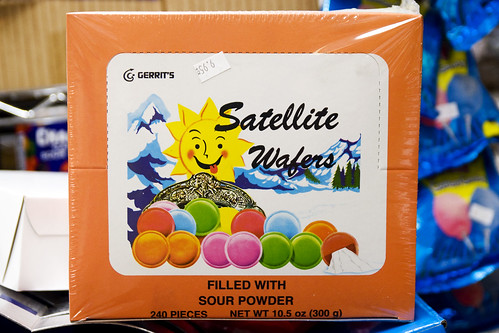 *does "the math"* That is SO not worth it for that lobster roll. You... could just buy a lobster. I think, that for the seafood in a seafood restaurant to not stand out, is something of a crime.

When I had taiyaki in Japan, for some reason I was shocked at how fluffy it was. I think I had always imagined it being crispy on the outside... *is baka*

Flying saucers yay! I love those. One of the few childhood sweets I still spazz over :)

i remember waiting FOREVER out one cold chilly fall evening to be seated at Mary's, that wait felt like 3hrs+. didn't have the infamous roll but don't really recall anything that rocked my world to go back either.

Prosperity (n): The condition of being prosperous, of having good fortune.

Posterity (n): All the future generations.

SuperChomp: Taiyaki are a bit crispy on the outside...was yours fluffy all over? :O

OH NOOES I don't like flying saucers! Nor does anyone else on Serious Eats it seems, haha.

Anna: That is waaay too looong. We had to wait a while, but not that long. I hope. Still, it was a longer wait than I'd endure for most places.

taiwanese pork chop!!! reminds me of the old fashion railroad bento from taiwan.. they used to serve these pork chop bento in tin cans at train stations in taiwan..

Alas, I love both your writings on TGWAE and Serious Eats. I usually laugh out loud which is both difficult for writers to make happen and nice. So keep up the great work!

Yes, my taiyaki was incredibly fluffy! It was fresh off of the... y'know, fish-shaped hot thing they use to cook it. I kinda wanted it to be almost like an ice-cream wafer on the surface.

*is sad that you and Kathy talk about our one meal together as the most blah everrr.... must fix by having an awesome meal together! But I totally agree. Company had nothing to do with it, the food was just overwhelmingly blahhhhhh! Gelato made up for it a bit though!
Maybe we can all go to the Batali place that Kathy always raves about... Otto I think? That should make up for it right?
PS Your photos came out so excellent!!!

Sux that you were so disappointed Robyn :(

33 dollars for a bread roll with some crab sounds expensive, even if that would convert to about 1.2 Euros ;) SPOON

33 dollars for a lobster roll?
that is nuts!

Grace: I wish trains in the US had pork chop bentos. ..Epic fail.

NAOmi: Thanks! I try to make the LOLs.

SuperChomp: Oh, I was so not thinking the ice cream wafer thing. More like..crispy pancake. :)

Yvo: Yeah, it's a shame that meal will forever be known as..THAT meal. Yes, we have to take you to Otto one weekend! Kathy is currently in tax season hell on weekdays.. :\

The one time I was at Mary's Fish Camp, I was underwhelmed also. The lobster in the lobster roll I got was rubbery and the mayo sauce was loose. The fries were good though and I prefer them over the potato sticks at Pearl. The rest of the food was just eh. I have friends who swear by Mary's but I'm definitely a Pearl fan.

My girlfriend and I had the worst meal ever at a restaurant called Frank's on 2nd avenue. They were rude and made us wait for a table when there were a few staring at us. For some reason they wanted us to sit at the bar squished up next to an old t.v.
But we stayed the course as Frank's was pretty packed and everyone seemed happy with their Italian food...
What we received was wet overcooked linguine with a what was called ragu but was certainly not one. My girlfriend sent hers back and got my wet overcooked black linguine with seafood (pesce de mare).. It was awful! - AND $22.00 to boot... We left with fifty dollar tab and we were still hungry... The worst food experience in 20 years in New York... We are bewildered by the crowds.. Have you been there??

danny: I haven't been to Frank's. That sounds pretty crappy.. :(