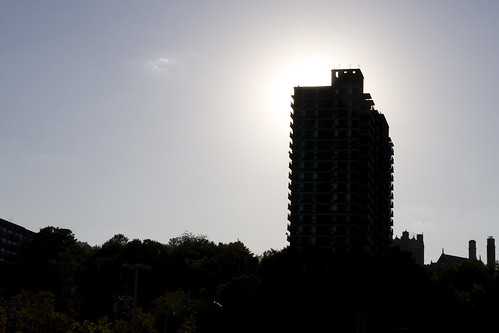 OH YEAH, CHECK OUT THAT SKYLINE!!!

But the most fun we had (or was it just me?) was when we took advantage of the beautiful clear blue sky, the lack of human interference, and the abundant space by shooting jumping photos. 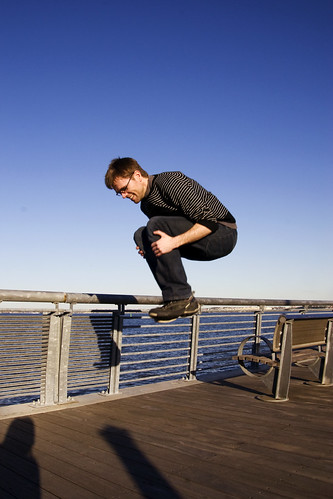 For a while, every time we took this photo it looked like he was standing on the railing.

Kåre went for the cannonball look. 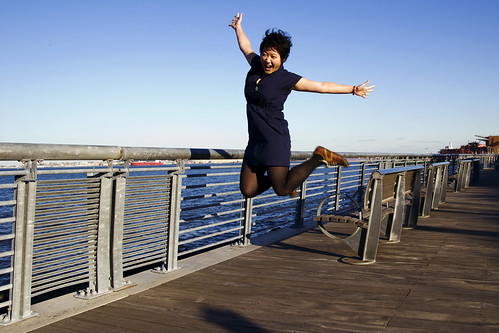 I went for the "MRAAHAHHHAHHhhaa ahhh!" look. (It looks like I'm jumping higher than I actually am. Spring-powered legs, I do not have.) 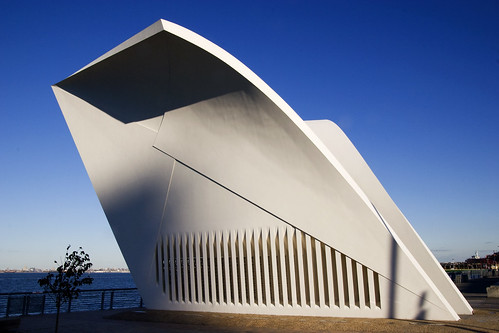 Actually, there is a nice September 11 Memorial up the water's edge. It kinda looks like wings. Or envelopes. Or both. Inside the "wings" are silhouettes and descriptions of September 11 victims. I didn't realize how depressing that was at the time, but it's kind of like being in a graveyard without the bodies. Damn.

I hope I didn't ruin it too much for you. 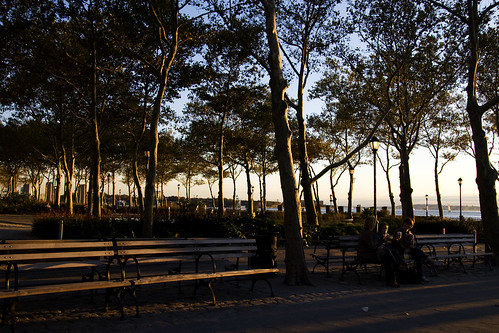 Back in Manhattan, we walked to the southernmost tip of the island through Battery Park, which was prettier than I thought it would be. (I had only been there once before. In general I have low expectations for New York City parks because I fell in love with Parisian parks, which probably isn't a fair comparison because parks in Paris are manicured to perfection.) Although impersonal skyscrapers tower over the north side of the park, the south is unhindered with only water as its boundary. I preferred to ignore the north side. And if I squinted and concentrated really hard, I could 50% almost pretend that I was dreaming about being in Paris. 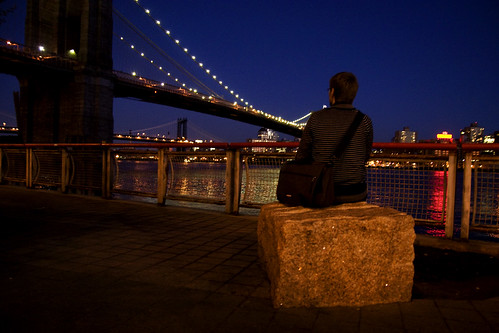 We walked up to the World Trade Center (a big hole in the ground, basically), through the Financial District, and up the eastern edge to get a glimpse of the Brooklyn Bridge and the no longer running waterfalls. 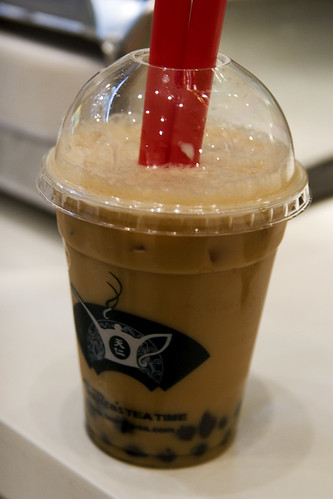 But the main reason I wanted to take that route wasn't to look at the bridge but to introduce Kåre to a taste sensation unseen in Bergen: bubble tea. We stopped into Ten Ren for the standard cold, sweetened black milk tea mixed with marble-sized tapioca balls. 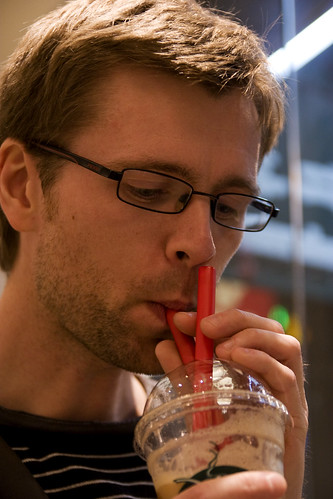 After getting over the strangeness of every sip through the fat straw being interrupted by soft, chewy blobs, he decided that he liked it. Victory! He liked it so much that he bought a bag of tapioca balls later that weekend. What's next? A Bergen-based bubble tea chain?! ...Probably not.

I also wanted to feed Kåre an egg custard tart from the Egg Custard King Cafe across the street, but decided to hold off so that we could eat dinner without wanting to throw up. 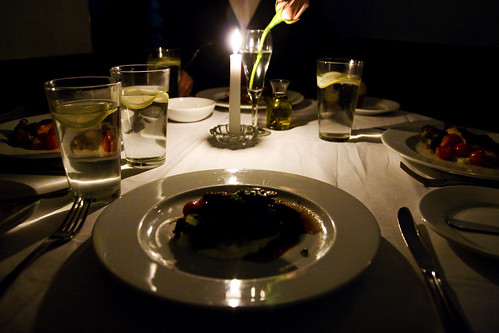 For dinner, Kåre and I met up with Kathy and Greg at Sonia Rose in the Lower East Side where our friend Alice was waitressing. Specifically, I wanted her to be my waitress. One of my friends said she'd feel weird in that kind of situation—being served by a friend—but I knew with Alice, there wouldn't be anything weird about it. It would be like any other time hanging out with Alice, except...with her serving us food. And that's pretty much what it was like. 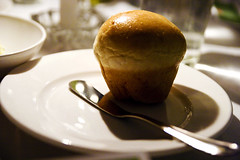 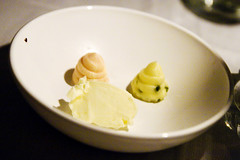 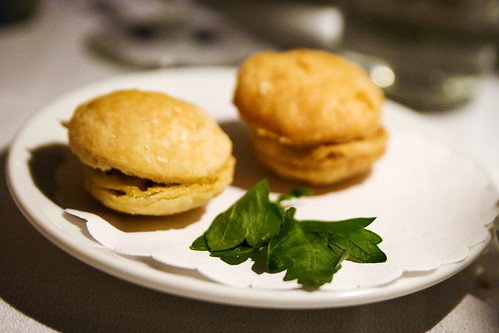 Creamed spinach in puff pastry things (amuse bouche): The puff pastry was so airy and crisp that it exploded/melted as soon as I bit into it. It meltsploded. 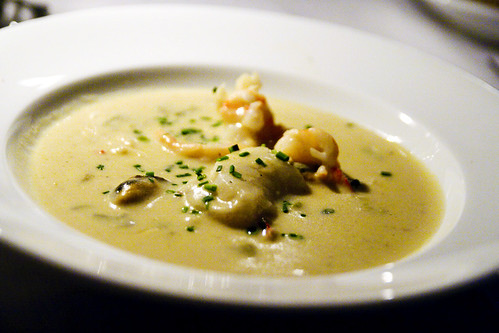 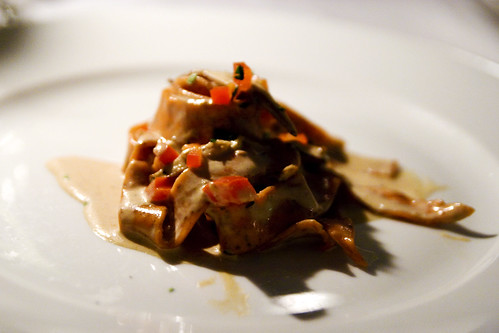 Fettuccine with shitake and balsamic reduction (appetizer): I only had a little bite of this, but it seemed nice. Kathy approved. 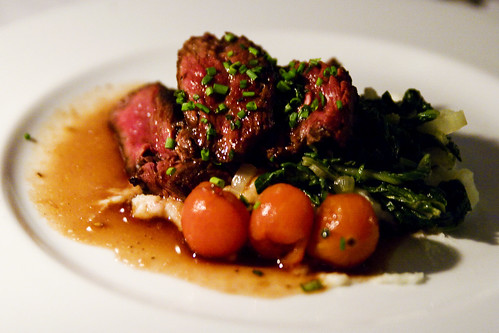 Grilled hangar steak (entrée): With swiss chard, port wine reduction, lil' tomatoes, and maybe mashed potatoes but my memory is fading by this point. I rarely eat steak because I'm not a big fan of it. Why did I get this? DUNNO. Because I didn't want the other two choices. Ever since I was little I've found steak to be too tough to be completely enjoyable (my preferred meat consistency is found in slowly stewed beef or braised pork, that is, requires very little chewing) and methinks I still feel that way. 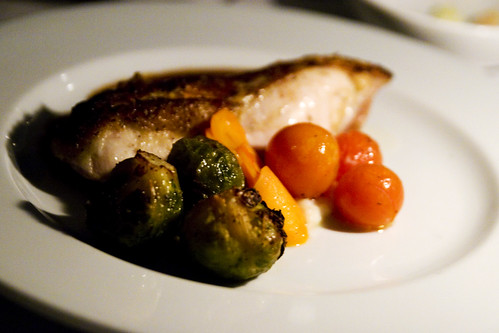 Roasted breast of free range hen with portobello truffle sauce (entrée): I probably would've liked this better, but then you never know when poultry will be "meh." Brussels sprouts are a plus though. 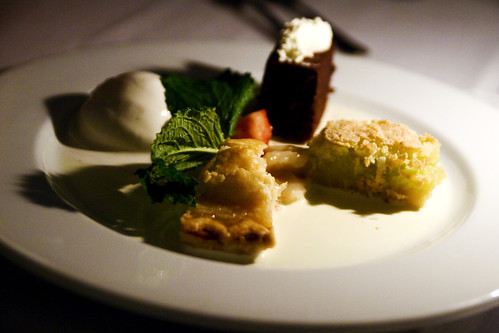 Dessert sampler: Apple pie, chocolate cake, vanilla ice cream, key lime bar, MINT LEAVES. While I was initially excited by the prospect of getting a bunch of desserts in one go, I was so freakin' full by this point that I had trouble eating this. My favorite part was the ice cream, and then I kind of picked at the other three desserts while moaning, "Uuunnnggg.". I ate the whole sprig of mint without trouble, aside from the laughter around the table for my unconventional hands-free eating method. 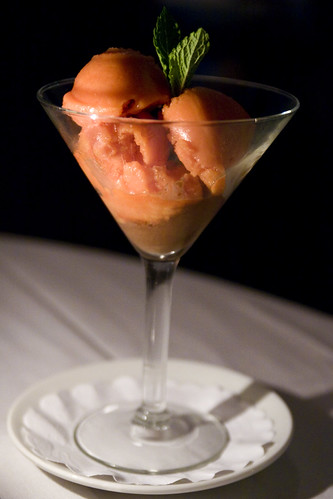 Blood orange and chocolate sorbet: Kåre was the only one who went for the sorbet sampler. I probably should've gone for this too. Doh. 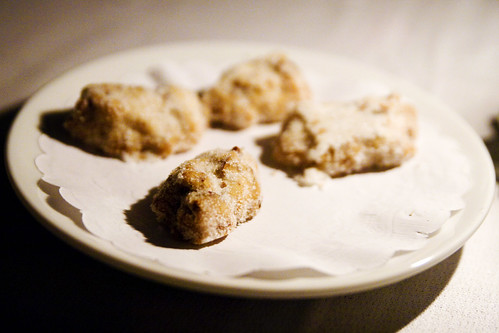 Pecan sandies: Unexpected, more desserts came out. These little pecan sandy-like cookies were actually nuggets of butter barely held together by flour, sugar, and pecans. They were goooood. But I couldn't tell how good because of that "stomach was 110% full" problem. 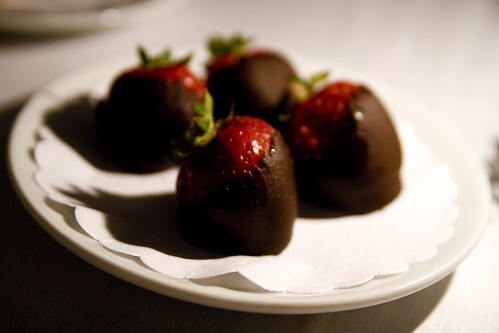 Chocolate-dipped strawberries: I didn't even touch these, partially because I was sleepy and food coma-ed out, more so because I don't like chocolate-dipped fruit. I'm okay with ice cream and nuts dipped in chocolate, but fruit (dried or fresh) never does it for me. I can't be the only one.

Our meal unexpectedly lasted about three hours. The food was a little slow coming out (it was a busy night), but it was easy to pass the time with three other friends and the best waitress ever. The best waitress who, I now realized, probably didn't feel the effects of our larger-than-usual tip because the tips get split between all the waiters, but I make it up to Alice in other ways. By loving her!!! Doesn't love count for something? No? Uh.

On the way back to my apartment we met up with Alex, thus ensuring that we would have a most awesome Saturday.

Battery Park
The tip of Mahattan. If you miss it, you're probably drowning.

hi Robyn, yeah those prix fixe menus are deadly. i'm always like, 3 courses? fffft... easy! but end up waddling my way out.

Those photos at Sonia Rose look like you brought a flash light with you to help light the food, haha! Which I might do next time! Oh wait, I just realized. I think you just changed the color temp of the candle light?

Gordon: I used my virtual flashlight, that is, PHOTOSHOP.

We had a special candle that only glowed blinding, heavenly white light...okay, every photo was originally reddish and yellow, so we're gonna let the freaky candle sliiide. [whistles, puts hands in pockets]

All that food looks awesome. The blood orange sorbet looks especially droolworthy to me.
I at first thought awwr, no egg tart (of awesomeness), but it looks like it was a wise decision! I love all those little extras when you go somewhere a little bit posher - here's an appetiser, here's a palate cleanser, here's a complimentary entrée - I'm going to explode but yay!

mmm, that photo makes me want to eat steak, and it's before noon. but i cannot stand those bubble teas. don't like the chunky.

i wish you had the salmon! I hate salmon when it's cooked, but it's actually pretty damn dericiousness!

ODD. I was just telling my friend (this morning) that I'm not a big fan of fruit+chocolate. You're definitely not the only one. It just doesn't do anything for me.

Jane: Ahh, you have to be careful of those M&M overdoses. IT MAKE U CRAZEH!!

SuperChomp: I've exploded so many times, yet I'm still not used to it. I think Kåre may have gotten a nibble of an egg custard tart later that week, so it was all good.

Lainey: I'm not a big fan of the chunky either. I'd rather just drink the liquid!

Alice: I eat less so YOU CAN EAT MORE!! Yes.

J F: Yay! I have a anti chocolate + fruit buddy.

Also not a fan of chocolate-covered fruit. I prefer both separately.

Then again, I'm not a huge chocolate fan - I know, that's shocking, but nevertheless... I'd much rather have baked goods.

How did you take those lovely near-nighttime pics? My camera is usually terrible/blurry after the sun goes down. Poo. And the food looks delish. I wish I had TenRen right now! 25 more days until I go home to NYC!

Hahaha does the Chef at Sonia Rose know that his butter looks like lumps of manga poop?

piccola: I...like chocolate, but not as much as I used to. Not sure why. I used to buy chocolate bars as snacks and now I can't imagine doing that.

Joanna: I use the highest ISO, try not to move, and then photoshop the photo to make it look brighter! ;)

Mike: I hope so. Its neat turd-like appearance cannot be ignored.

Oooo bubble tea!! I just like to eat spoon fulls of the little balls, and give the tea to someone else...I don't like tea...:(

Ooo all that fancy food for only 20.08 per person?! That's amazingness!

Too bad it's all over...and I am nowhere near there...

Kate: Whoa, you just eat the balls and not drink the tea?! I haven't heard that before. I like anything with enough sugar, so bubble tea tends to meet that requirement.

hi,
if I understood correctly, the whole meal at Sonia was 20.08$ ? that's about 15 euros....living in Paris, I have to tell you that in Paris a bill for a meal comparable to that presented above would be around 100$. seeing photos I can say the quality was very, very decent if not very good.
gosh, how life is cheap in New York. probably the same level of prices as it is in Tokyo. Plenty of nice restaurants serving good food from every corner of the globe with modern intelligent cooking and small, accessible price to enjoy it regularly. it's really a shame that finding a not pretentious, not showy yet glamour decent quality food in Paris equals to see your wallet go on a 60-80 euros diet.
cheers!

prettygoddess: It was a special deal just for the month, but overall there are definitely places you can get great meals like this one for ..not too much money. :) Well, not $100, hehe. I do love NYC for the awesome food and cheap eatas, even if we are greatly lacking in BAGUETTES, CROISSANTS, and MACARONS. Doh.

This restaurant is incredible in there my husband asked me if I wanted to get married with him and of course I have to said yes because it is amazing.