That's Kåre (pronounced something like "koh-rah" with a rolled r, in case you ever hear me say his name in real life and have no idea who I'm talking about), laid back and content with doing anything, or nothing in particular, as always. He arrived at my office last Thursday, fresh from Norway. Or not so fresh, but after half a day (or was it more?) of traveling, with a stopover in Amsterdam. It was his first time in New York City—hell, his first time outside of Europe—and I wanted to think of a good way to occupy his time before I got out of work.

"Well, this area is kind of...not interesting," I said while pulling up a map of Chelsea on my computer, "this area" being my block of 27th Street between 7th and 8th avenues. "If you go west, you'll hit galleries. If you go east, you'll hit...stuff. If you go north, you'll hit Times Square. You basically want to go anywhere outside of the few blocks around my office. ...Wait, are you hungry?"

"Oh yes," he replied, while smiling. I think he was hungrier than his voice led on. He was probably thinking, "JESUS CHRIST, FEED ME, I've been eating airplane food for the past 12 hours." But he wouldn't actually say that.

I printed out a map."Go to the Shake Shack," I said while drawing a circle around Madison Square Park. "Get a burger. It's awesome."

So Kåre's first meal in New York City was at the Shake Shack. (He liked it, of course, or else we couldn't be friends.) I think I steered him in the right direction. 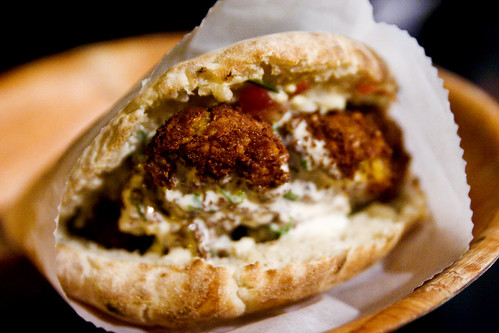 And for his second meal, falafel and fries from Taim. Bringing people from out of town to Taim is such an easy choice: It's awesome, cheap, and in an easily accessible, interesting food-filled neighborhood, with the unintentional plus of being vegetarian. 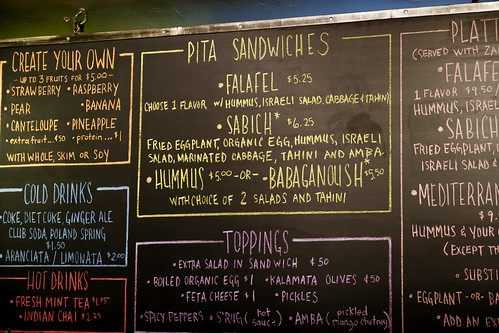 The prices may seem higher than at other places, but it's worth every penny. Don't go to another, probably inferior falafelrie just to save a few bucks. What sets Taim's falafels apart from other falafels I've had is that they're light, crisp, just moist enough (none of that mushy stuff) and their pitas are fresh, thick, and soft. Thickness is important—few things are as unsatisfying as biting into a pita sandwich whose pita is about as structurally sound as a paper napkin, something that I often come across and makes me want to track down the person providing all these crappy pitas and force feed him one of his products. A few weeks ago I went to Falafel Chula on the way home from the subway stop and by the time I got home, the pita had semi-disintegrated. It was a sad moment in my falafel-eating history that I hope to never repeat, unless I am starving or actually crave a soggy mass of mashed chickpea. 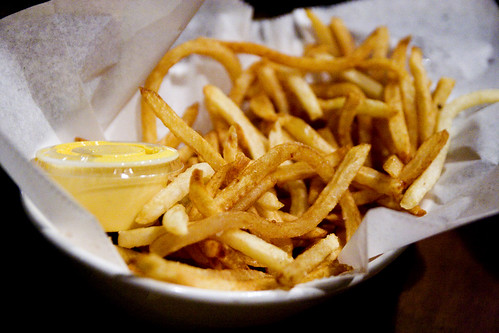 The fries weren't as crispy as they've been in the past, but they were still good, and saffron aioli dip increases the deliciousness. While it's possible for one person to eat a whole order of fries (I've heard stories), I'd always rather share with at least one to three other people. In this case, I shared the tub of fries with Kåre, Diana, with Ian.

We didn't do anything else that night, as Kåre was understandably pooped. The next day would prove to poop him out even more, but with the reward of eating more delicious things. Ohhh, you will see...rubs hands together...

When your out-of-town friends drop by the office, do they get to meet Ed? That would be so cool!

And does Ed ever wonder why your friends loiter around the office?

I'm kind of wondering the same thing as David. Even if you didn't seem like the nicest, bubbliest person ever (haha), I'd want to be your friend just to get a peek at SE headquarters. =)

David and Kathryn: Yup, everyone meets the Ed!...if he's in. I think everyone's used to my friends popping by cos it happens...kind of a lot. Well. Only compared to other people. It often works out that it's easier to meet me at my office than wherever we're going next (probably because I work later than most people), so I wouldn't say anyone visits for the hell of it. ;)

Eww...mass of soggy chickpeas:( Not pleasant.

Yes, I have DEFINITELY eaten a whole bag of those (to nurse a hangover).

I am addicted to Taim's hummus, when I'm not feeling like fried. When does that ever happen??

I've never been to Taim, but after reading this I will definitely try to stop by soon. I have my eyes on that falafel :-)

Kate: I've had many a soggy falafel. Whyyyyy.

Allison: NOT FEELING FRIED? WHAT IS THAT?

Mitzy: Yess, you should go. The sabich pita sandwich is also awwwesome...can't really eat both in the same meal. You can go TWICE!

I like your blog, but never realized you live in the worst part of the city. Feel for you.

Paul: Wait...when did South Williamsburg become the worst part of the city? :O

Now that you know I'm not a psycho killer, I want to drop by the SE offices too... lol

Long time reader/lurker, first time commenter. :) I visited New York this past weekend and made a trip here based on your recommendation. Delicious!

But $5.25 is expensive for falafel? Really? How cheap are regular ones?

Jin: Thanks for delurking! IT'S ABOUT TIIIME!!

I think the cheapest falafel sandwiches are in the $3 range. So there's a $2 difference...which is quite weeny, which is why people should go the extra mile to TAIM!!!