Fried chicken tends to taste awesome, no matter what form it takes. Even McDonald's chicken nuggets can rate highly on the scale of deliciousness. Yup, those nubs of reformed chicken mash have the capacity to hit the spot sometimes. Maybe more so if you're drunk. El Castillo de Jagua's chicharrones de pollo sin hueso, large, super-crispified, non-uniform chunks of battered boneless dark chicken meat, are now one of my most favorite foods ever. Kind of. They lose a few points for lack of juiciness (some sort of dipping sauce could help with that), and being so easy to eat that I shove too many into my stomach and then feel like a bloated bag of meat and the essence of fried, but it's worth the pain, even knowing that the rest of your night will be punctuated with the need to expel silent fried chicken-flavored burps. Of course, you can't just eat fried chicken as a meal; you need starch-o-licious yellow rice and soupy beans to go with it. This is really what fills your stomach's capacity to its upper limit, not the chicken alone; layering a bite of chicken with a spoonful of al dente rice follow by another spoonful of barely solid beans probably doesn't fit in your digestive system's "Handbook of Healthy Food Combinations." But the taste buds want it! AND THE TASTE BUDS GET IT! AND FOR SOME REASON WHEN I PERSONIFY THEM, THEY SCREAM LIKE THIS!!

I didn't start my dinner with the fried chicken-rice-beans holy trinity. It began with joining the table already occupied by Umami, her two sisters, her cousin, and her cousin's co-worker. ...Yes, this was planned; you don't just walk into a restaurant that looks like a roadside truck stop and see your food blogger friend from Paris in the middle of it.

I suggested going to El Castillo de Jagua after a failed attempt to get a bo ssam at Momofuku (at least, at the time that was most convenient for us), not that they're comparable eateries, but I do like both of them very much and El Castillo has the capacity to hold large parties. Large meat-loving parties. It's as vegetarian un-friendly as Momofuku, if they are to have anything in common. Olivia and Kathy also joined me for the night of meat-splosions, although Kathy had already eaten too much before dinner and so mostly sipped on her papaya milkshake. Tsk-tsk! ;) I too ordered a papaya milkshake. These aren't like those super-thick, ice cream laden milkshakes you might get at an American restaurant, but just slightly thickened, milky fruity goodness. It's refreshing, a smidge more indulgent than just drinking juice. The table received complimentary baskets of pre-buttered sliced of toasted bread. As though free bread weren't already easy enough to eat, now we had been saved of the grueling effort of slicing our own pats of butter and applying them to our bread. It may not be the best bread you'll ever eat, but it's already buttered—why resist? 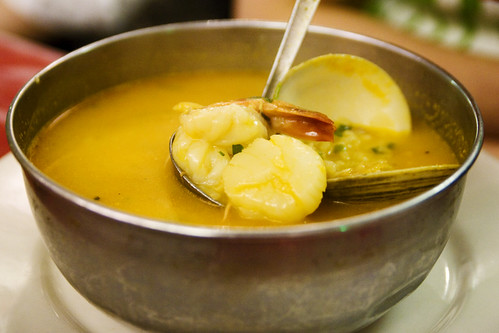 The best dish of the night may not have been my fried chicken, but asopas de mariscos, or seafood soupy rice, that one of Umami's sisters had ordered. I had never thought of ordering soup before—I would just go straight for the meat + rice + bean dishes. But I probably wouldn't have thought of ordering the seafood soup because of the $23 price tag, making it one of just nine items on the large menu that costs over $20 (most dishes are under $10). However, you could probably feed two people with one bowl, which was full of shrimp, clams, scallops, squid, and probably other stuff (aside from the rice at the bottom of the bowl). The soup may have been a bit too salty—something I've experienced with other dishes at El Castillo—but you'll notice the savory briny sea flavor more. Hopefully. There was a lot of umami going on. Umami's other sister went with the sopa de pollo, or chicken soup (unless this was the chicken stew...sorry for the memory loss). Also good stuff. With liquidy chicken essence. 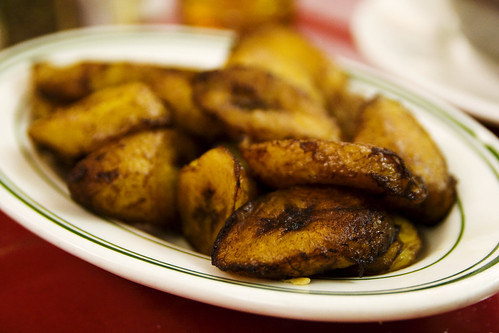 The maduros, fried yellow (ripened) plantains, were very sweet and soft, like eating a heartier version of fried bananas. With some ice cream and honey, they would've made an awesome dessert. I prefer tostones, or fried green (unripened) plantains as a side dish. They're fried twice! Twice! HEEHEE. So you end up with non-sweet, super-crisp patties of starchy goodness. 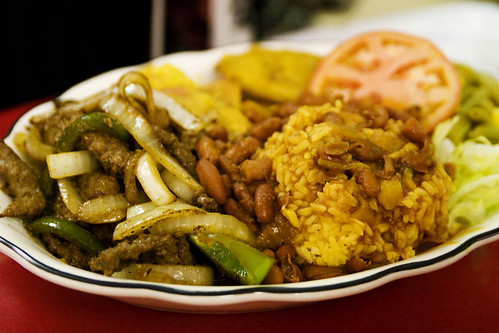 Steak-craving Olivia ordered the especial bistec salteado, a big plate laden with sliced pepper steak, rice topped with beans, salad, and tostones. The steak was of the tender, juicy sort. Yet another item to put on my list of "things to order next time." 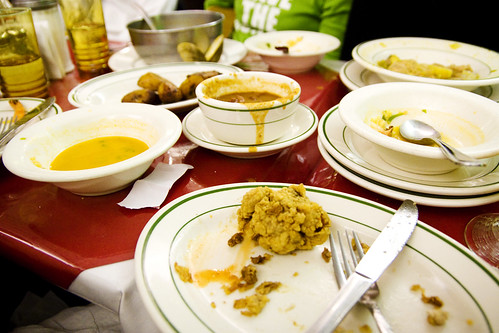 There was no way we could polish off all our food, but I think we did a pretty good job. Of course, my friends helped me eat my fried chicken; there's no way I could've eaten it all save for one piece. If only I could have that piece now. (I mean, a fresh piece, not a nearly 2-week old piece.) Since we had all entered the "food coma" stage, we ordered just one small flan cube for the table to share. It's a surprisingly dainty portion size considering how large the other dishes are, but enough to give eight people a small taste. And a small taste is all you need; it was so sweet, I could only think of comparing it to candy. I prefer my flan to be a bit lower on the sugar buzz-inducing scale.

They also have a chocolate cake and coconut cake that I'd like to try, but I'm usually too full by the end of the meal to think of adding a slab of cake on top of whatever unrecognizable mash is churning in my belly. A strategy must be employed. Maybe if I could just limit myself to sharing one entrée with a friend... ...yeah, right. The food is so cheap that you don't have much reason to restrain yourself.

When I move to Brooklyn, I'll only be 15 minutes away from this place. And then maybe I'll actually leave enough behind on my plate so that I have leftovers to take home.

when you move, you'll also be ridiculously close to tiny's, sss, and cake shop...sooooo we'll be having plenty of delicious nights out ^_^

Gosh, u can't really say McNuggets taste good? :D Well, I probably also like some foods you'd think are a bit...off. :D But those plantans look good, never actually tasted them... So, are they like bananas but not as sweet?

it's a well-known fact that fried sweet plantains are superior to tostones, AND they can be fried twice to make them extra crispy.

everything else you've said is correct.

Craving inducing temptations......again! Must have fried chicken. But it is spring/summer and must not eat the delish fried things.

Robyn, I heart you not!

"They're fried twice! Twice! HEEHEE" has to be the best quote of this post. I think these things but never know how to express them. perrrrrfect!. :)

Kathy: Sandwiches and cake, ALL THE TIME, OH YEAAAH!!!

Heidi: Oh, chicken nuggets are fine (as long as i don't think too hard about how they were made)! Maybe. Depends how fresh they are, although you could say that about anything. I remember on my last visit to McD I was expecting the fries to taste better than the nuggets, but the fries tasted like they had been sitting out too long. FAIL!!!

Super ripe plantains are banana-esque, but when they're not ripe they're...not banana-esque. As far as I know, they're usually eaten unripe. But then I've rarely eaten them! I DO NOT KNOW THE SECRETS OF THE PLANTAIN!

Michelle: Okay, I need the doubly fried version! I wonder if the restaurant would do that if I asked? "Hey, fry these again! GIMME MOAR FAT IN EVERY BITE!" ...Okay, maybe not.

Coco: Oh that...it's a common writing style that you probably won't learn in school. Take something you like about a food, repeat it (with emphasis), then giggle. I'm not sure I would encourage using this technique too often, as you will sound like you giggle excessively, but I DO giggle excessively, so...um...

Only dark meat for their nuggets? Oh, total win!

I don't know if it's your post-processing, but the food all looks deliciously lurid, especially the chicken soup/stew. I'm hoping the foods are all saffrons and turmerics. Food that is naturally saturated Technicolor(tm) is fab :]

I can't wait to hear about your first meal in your new place!

And let me just say this: You had me at tostones. :)

Omg, for my friend's mom's birthday, I had to wait for a M15, which I missed, of course, when I was just half a block away - for like 40 min, then take the excrutiatingly long ride down to El Castillo, and then carry all the food back to her apartment for the surprise birthday. By myself! In a big old bag. With my arms already dying from other bags. (I also went to Economy Candy x.x) It was worth it, though. We had the chicharron as well and two orders of that plus maduros + tostones were more than enough food for us b/c we also had a carrot cake from Financier. :D

SuperChomp: I think it's all naturally lurid! But as to what causes the lurid-ness, I'm not so sure...

Steph: I suspect we'll be so tired on our first day of moving that we'll just go out to eat. WOO! I wonder when our first proper meal at home will be...after we get a kitchen table and things... gaah!

Yuizaki: ECONOMY CANDY IS TEH WIN!!!

Damn, sounds like you did a good job at El Castillo! I'M SO PROUD!!

I moved to Rivington Street back in 1985 and Castillo, Festival and Economy are the only things that remain from that era. Long gone is Bernsteins on Essex which was a Kosher Chinese restaurant! Great post, reminds me that I have not been back in a while. The roast pork is fabulous as is the steak Milanese.

Oh man, the fried chicken and flan look like they could change my life! I have to go soon!

Beef Aficionado: Oo, go back to Rivington Street! I can't imagine what it must've been like in 1985. Now it's all like...well, it's like a mix of something dirty and something clean. It's patchy. Haha.

Mary Sue: Damn, I wish I could lose weight that way! I can lose weight by cutting out starch, but it's no fun. :(

Danny: Oo well I'm sure I'll be going more once I move..sounds like another group dinner!

I love fried chicken! In LA there is a restaurant, Roscoe's that is famous for its chicken and waffles.