"Do you want to eat at a restaurant called Pig Heaven?" asked Lauren, knowing very well what the answer would be. It was the best invitation I'd heard in a long time, in addition to possibly being the most awesome name of a restaurant I had I had ever heard of in New York City. In just three syllables, it goes straight to the heart of your desires: "We have pig, and we killed it for you."

But what if you don't eat pork? Hell, what if you don't eat meat? This Upper East Side institution—it's been around for over 20 years—has everyone covered. The menu outlines food in categories of pork, no pork, hot pork, cold pork, vegetarian, and then some. Vegetarians can eat their dishes of tofu and vegetables (somewhat) peacefully as their carnivorous friends dig into porky dishes wafting swinely fumes in their direction. When I ordered the small barbecue pork butt (the term "butt" refering to the upper shoulder; yeah, that's not confusing at all) or char siu in Chinese, I was afraid that "small" could've been a misnomer, resulting in a plate laden with more pork than one should consume in one meal. Not to say I didn't exceed such an amount, but I was relieved to find that the small size actually was a diminutive pile of glistening fat-oozing pork strips unlikely to cause me much stomach distress. If there were more more slices of sweet, tender pork in front of me, I definitely would've eaten them. The pork was accompanied by a dipping sauce that tasted something like watered-down soy sauce (probably had other stuff in it, but I'm unable to identify flavors, you know). The pork didn't really need the extra flavor, but I dipped it anyway because it was there. As much as I enjoyed the barbecue pork butt, what I should've gotten was Lauren's small suckling pig, aka slices of baby pig comprised 50% of rich, slightly crisp, porky skin fat and 50% tender meat. If the portion had been any larger, it would've been deadly. Biting into a chunk of fat doesn't always qualify as an enjoyable experience, but when it's the fat of a baby pig, it's hard for it to suck. Olivia's sweet and sour pork was unexpectedly made of pork-based meatballs. I thought it would be more like whole pork chunks coated in sauce. It wasn't a bad dish, just not memorable. 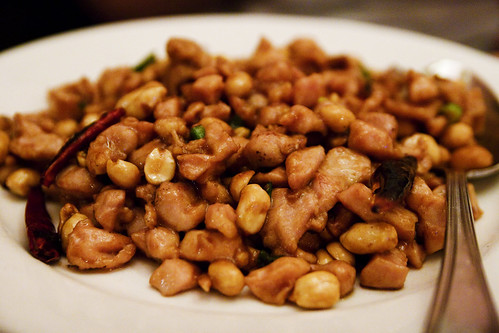 Jones was the lone non-pork eater with his diced chicken with hot pepper sauce and peanuts. Lots of peanuts. I didn't try any, but I think he ate most of it. THUMBS UP! Is it fair to say we offset our pork consumption by eating it with brown rice? Probably not. I usually go for white rice, but in this case the nutty flavor of the brown rice went well gnashed together with the varying flavors of pig-based origins. The complimentary pickled vegetables of cabbage and cucumber-like things, which tasted more sweet than tangy, also went well with the pork. And the rice. And, hell, by itself. Across from the cashier's counter was a table overloaded with pig shaped items. If you have an old piggy bank laying around that you don't want, I'm sure they'd be glad to add it to their collection.

While the restaurant's dessert menu looked interesting (the important note being that they had one at all, a rare occurrence in Chinese restaurants) and potentially tasty (like the bread pudding with orange sauce), we opted out of it so we could eat at... 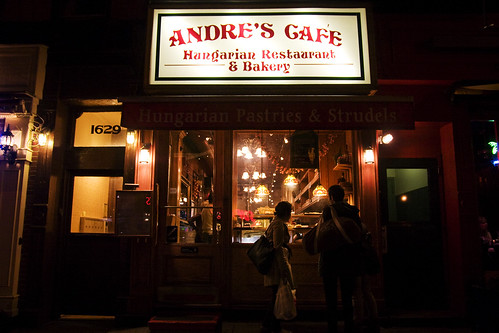 Andre's Cafe, a Hungarian restaurant and bakery! Just walk up five blocks and you too can cap off your Chinese meal with flaky Hungarian baked goods. Your stomach will be a frothy bag of multicutural flavors! Like a United Colors of Benneton ad, but with partially digested food instead of smiling, attractive models. 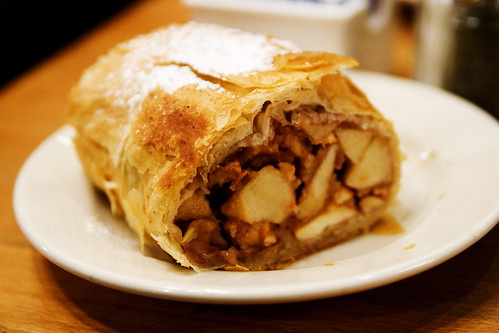 Jones and I went with fat logs of apple strudel, layers of light, flaky phyllo sheets wrapped around loads of soft apple chunks. I thought it could've used more sugar. A lot more sugar. But then I guess it would've tasted more like sugar and less like fruit, which probably isn't the point. Lauren and Olivia opted for the cherry and cheese studel, which I liked more than the apple. It had a lot more going for it: sugar, the tartness of the cherries, and creaminess of the cheese, all mooshed together. The apple studel is the boring kid in the back of the classroom who doesn't say anything (like me!), while the cherry and cheese studel is like...the opposite kid. The perky one who talks a lot and has nice hair. You know. And there's Lauren, Jones and Olivia, just for visual proof that people are willing to hang out with me.

I'm quite unfamiliar with the Upper East Side, but at the very least it i has pork and strudel going for it. I'm looking forward to my next night of pork fat and cheesy cherry pastries. It will happen.

I need to eat Pork now! Oh well, I will have to wait till my next trip NYC! Pork induced NYC trip....eh...I have been know to fly over for less.
Andre's is one of the few places where they attempt Dobostorte (it's okay, not as good as in Budapest or Vienna though).
Check out Schaller & Weber (wursts!!) & Glasers next time you are in that neighbourhood.

And hey, I just read your post on Chile (the one about your lousy arrival) and... don't feel stupid!! My mom and I lost $5000 when we were in Switzerland (someone broke into our four-star hotel room while we were out and cleaned out our luggage), and everyone there, including the police, made us feel like dumbasses. =( So I feel your pain.. and here's a huuuge intranetz hug.

i love your blog! and i need to remind myself to not visit it after its too late to get food :(

Oh man, I have walked by that place before and totally dismissed it because how can one have Chinese food in the UES?! But what a wrong assumption!

And I always hated that kid who talked too much and had locks of Michael Ruhlman. Damn that kid!!

OMG. I didn't know about this place. AHHHHHHHH. This is why I keep coming back to NY, hearing about places like this! Robyn, your photos make this place look amazing.

When did Pig Heaven open? Ah...the things I miss by moving away from NYC...

Amy: Ooh, I didn't notice the Dobostorte, but next time I'll keep my eyes open for that! And wursts...YEAH, okay, there's a lot of stuff I gotta eat next time. ;_;

Jesse: Someone broke into your room? That's terrible! And the reaction of the people who work there sounds terrible too. Jebus.

HUGS HUGS HUGS, I FEED OFF YOUR HUGS, THANKS!

Angela: Maybe not you will will be ready to eat lots in the morning! WOO..hoo..not that I would recommend starting with pork skins.

Danny: Ah, check it out next time. Or...OR SHOULD WE GO THERE FOR OUT DINNER? I hadn't thought of that! Hm. Random Chinatown-ing is more adventurous though. (I dunno where I wanna go. Wah.)

Haha, okay how about the non-annoying talkative kid? If he existed...hm..

Jeanne: Ahh you must have amazing places out on the other coast too though! POORKS?! You can haz?

AppetiteforChina: I'm not sure exactly when it opened, but the earliest review I see is from 1984. So maybe...1984! :) And it's changed hands over the years. I couldn't compare it to its early years, but it tastes good to me!

Ah yeah--that's strudel done right! Flaky pastry, not puff. Have you ever made or seen authentic flaky strudel being made? This cracked me up:
http://www.youtube.com/watch?v=_jfGQ6qtGyc

When I first saw the title of your post, I thought Pig Heaven was the name of a southern bbq place. I never would have associated the name with a Chinese restaurant!

hey lady, lets get grub this weekend! i need to see you tristan and kathy asap! Ippudo, mayhaps?

Pork Heaven! I would not belive the place exist if not for the pics and apple strudel, I am an apple strudel girl. I am tempted, then again...... (Looking down at my pudgy tummy, I hate winter) maybe I shouldn't. I'll just feed my cravings by looking at the pics. Sigh!

ok, i used live on 82nd and lex and i TOTALLY remember walking by that place (now that I see the picture of the outside). those were the days pre-food blog or any type of money to eat out. but now that i'm still poor and living in brooklyn, why the hell not go back to eat some pork!?

i think you've just awoken a desire in me to travel back to the UES... THANK YOU!

i've gotta take some time around your blog!

amy @ we are never full

Uh, Robyn... I think I should point out that you wrote the "Upper West Side" when it's supposed to be the "Upper East Side."

Besides that, I WANT PORK. Especially the sucking pig dish, that's my favorite when I was growing up as a kid.

mmm porky memories...recently went to a party here where they served a whole pig on a spit. needless to say, i did have quite the tummy ache after eating about a square meter of crackling...mmm pig skin. glad you're back safe from chile travels!

Julie: I've never seen strudel making before! Cool video! I'd...totally mess that up if I were her. Which is why I don't make strudel.

Su-Lin: I was surprised too! Definitely sounds like BBQ.

Rose: It was quite good. We can go when you visit! ...Along with a bunch of other places...hm.

Lauren: BWAHAHA. I have fulfilled my duty.

Reese: I too have the pudge. It doesn't really stop me though.

Someday I will also be poor and living in Brooklyn, yay! (or I will be poor because I'll have moved out of my house, yeah.)

I never had sucking pig before. What a crappy childhood I had!

Jess: How do I get invited to that kind of party?

I wish I had pork on my fork right now. Sigh.

It's great having pork, knowing that the pigs you're eating are currently in heaven, probably smiling down at you enjoying their fatty goodness.

Unless it's Pig Heaven because it's heaven for gluttons...

It works on so many levels. Well, maybe just two.

Oh man.. I was doing fine till I got to the strudel pics... Now I'm STARVING and I want STRUDEL!!

This has nothing to do with Pork, but I saw this and thought of you Robyn:
http://www.mentalfloss.com/wp-content/uploads/2008/04/431IceCream.jpg

Ooh, I want pork meat. I never really used to *care* much about meat until I started reading your blog.

Yas: Pork On My Fork would be another good name for a restaurant.

Mia: The pork pics didn't do it for ya? Wah!

Angeline: HAHAHA..holy crap. I am frightened. But it's true; he is delicious.

Christina: Meat can be a very good thing. Taste-wise. Environment-wise, maybe not. I hope that my reinvigorating your interest in meat isn't an evil thing!

Hey, welcome back from Chile! Hopefully it was a good trip! Your blog is so great, I love the way you write, it's so funny! :D And that's a compliment. Have to say that since I started reading your blog about two months ago I've noticed I've developed a huge liking of Asian food... and a non-stop gelato graving, hahhah! :D

Heidi: I'm glad you like my blog, thanks for reading! Chile was awesome, but I gotta say...I missed Asian food, haha. :) Gelato was also missed. Ain't nothing wrong with craving Asian food and gelato!